The Wildest of Scottish Lighthouses

Like the guiding beams they cast out, lighthouses can lead visitors through the pages of Scottish history. The Caledonian maritime tradition has long been stitched into the nation’s culture – from the Viking influences of Medieval Norway to the thriving shipbuilding industry of wartime Glasgow, Scotland and seafaring have never been distant. 63 towers were built in the 19th century alone, almost all of which involved the work of Robert, Alan, or David Stevenson.

Over the years, the Stevenson family has become synonymous with Scottish lighthouses. The tradition began with Thomas Smith, a Scottish engineer and entrepreneur who was appointed Chief Engineer of Northern Lighthouse Trust in 1786. The Stevensons quickly became the most celebrated designers in the country, erecting structures in every corner of the nation.

Whether bearing the Stevenson name or not, the majority of lighthouses across the United Kingdom are now automated or fully deactivated. Their presence, however, is a continual testament to the ingenuity of Scottish engineering, with each still standing as a proud landmark overlooking their surroundings. This article highlights just some of these monuments and the deep history shrouding each of them.

As with many such projects, the building of Tarbat Ness Lighthouse was a reaction to a tragedy. Sixteen vessels were lost during a storm in the Moray Firth, leading to nationwide calls for new lighthouses in the surrounding areas.

The tower, standing a colossal forty-one metres high, is quite literally built upon further myth. Excavations reveal the remnants of a Roman fortress where the lighthouse now looms, and the area was rumoured to later be the site of a witches’ coven. While the latter has substantially less evidence behind it, the relatively frequent earthquake shocks reported around the site often fuelled wild speculation amongst locals. Sorcery aside, the lighthouse became automated in 1985 but remains open to the public for touring. 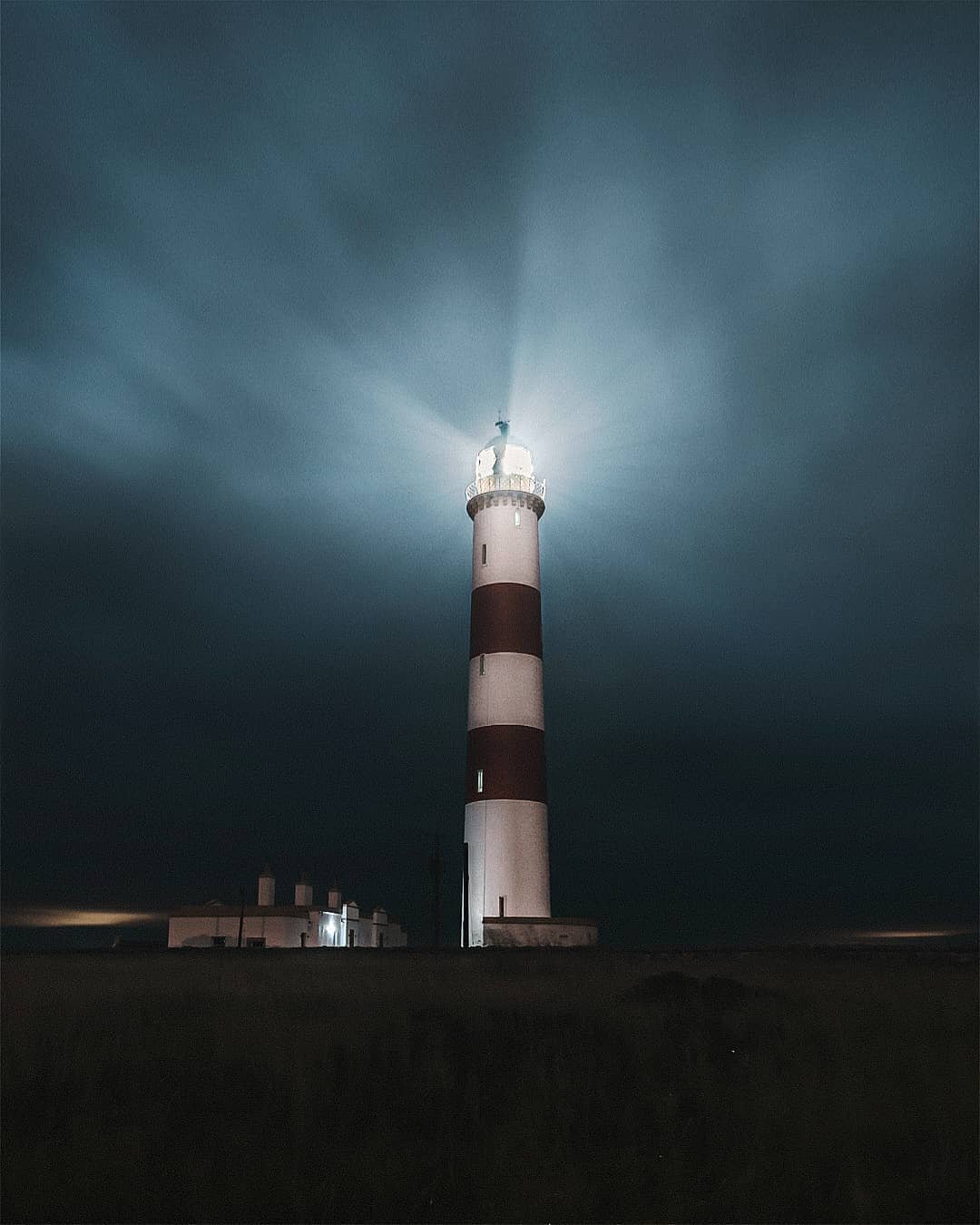 Jutting into the North Sea, Kinnaird Head is an extension of Fraserburgh which, in 1787, became the site of the first lighthouse built by the Northern Lighthouse Board. The Board purchased the local Kinnaird Castle – a structure in good condition but causing its owners to pay significant expense – and Thomas Smith soon installed and lit the great lantern. Although it has now been replaced by a newer lighthouse, the original building on Kinnaird Head now homes the Museum of Scottish Lighthouses. As well as exploring the adapted castle, visitors to the museum can also see the original lantern used to guide sailors through the choppy northern waters. The tearoom at the tower’s summit also offers views so incredible they make the climb worthwhile by themselves! 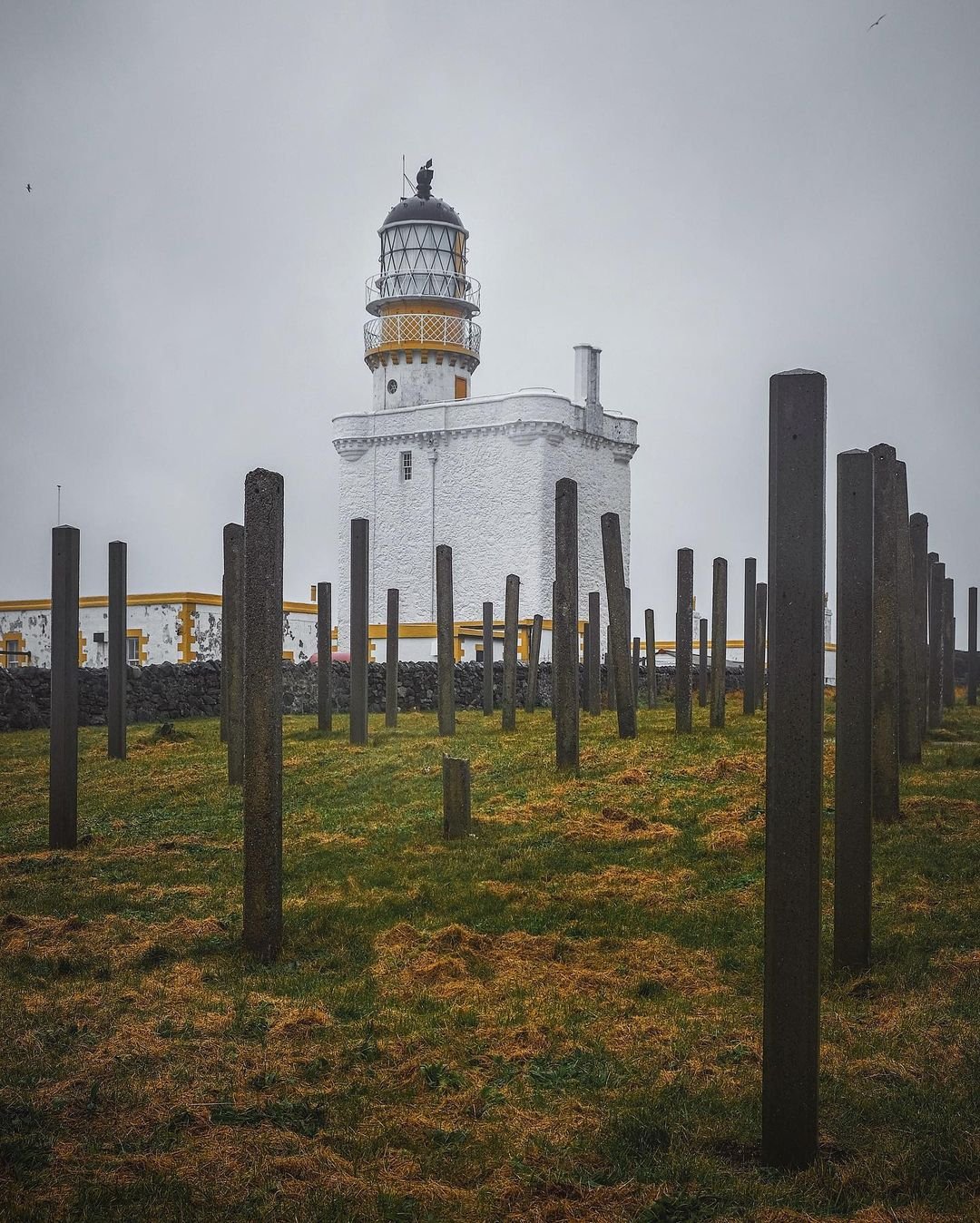 Although John O’Groats is typically thought of as the most northern point on the British mainland, that title is actually held by Dunnet Head. This makes Dunnet Head Lighthouse, perched as it is atop the three-hundred-foot-high cliffs, an incredibly remote location.

Robert Stevenson, the stepson of Thomas Smith and grandfather of author Robert Louis Stevenson, designed and built the tower. First shining in 1831, the lighthouse quickly became a favourite of the Queen Mother, who frequently dined with its principal keeper, Mr Malcom. In 1989, ten years after her highness’ final visit, Dunnet Head Lighthouse was one of many towers to be automated following analysis by the Northern Lighthouse Board. It is now open to the public, where would-be wickeys can rent one of the keeper’s cottages for a few nights that truly are away from it all. 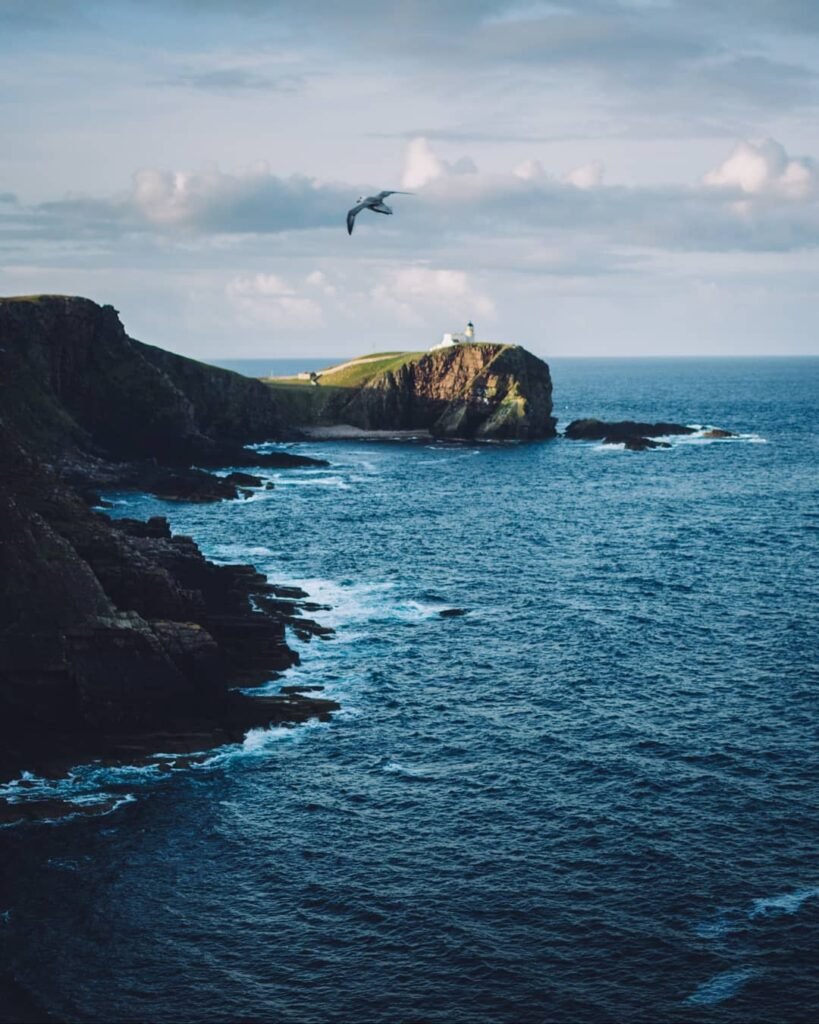 Thirty miles to the north of Aberdeen stands Buchan Ness Lighthouse, a tower steeped in military history. Petitioners first voiced their support for construction in the area in 1819, although the lighthouse itself was not built until 1827.

Scotland’s seafaring tradition made coastal locations prime targets for enemy attacks, and Buchan Ness was no different. Midway through the Second World War, an oceanic mine drifted onto the Aberdonian shore just 50 yards from the lighthouse. Thankfully, the structural integrity of the building protected the inhabitants from any harm, and only panes of glass were shattered. A testament to the skills of Robert Stevenson, the lighthouse continued its function until 1988 when it too was automated. 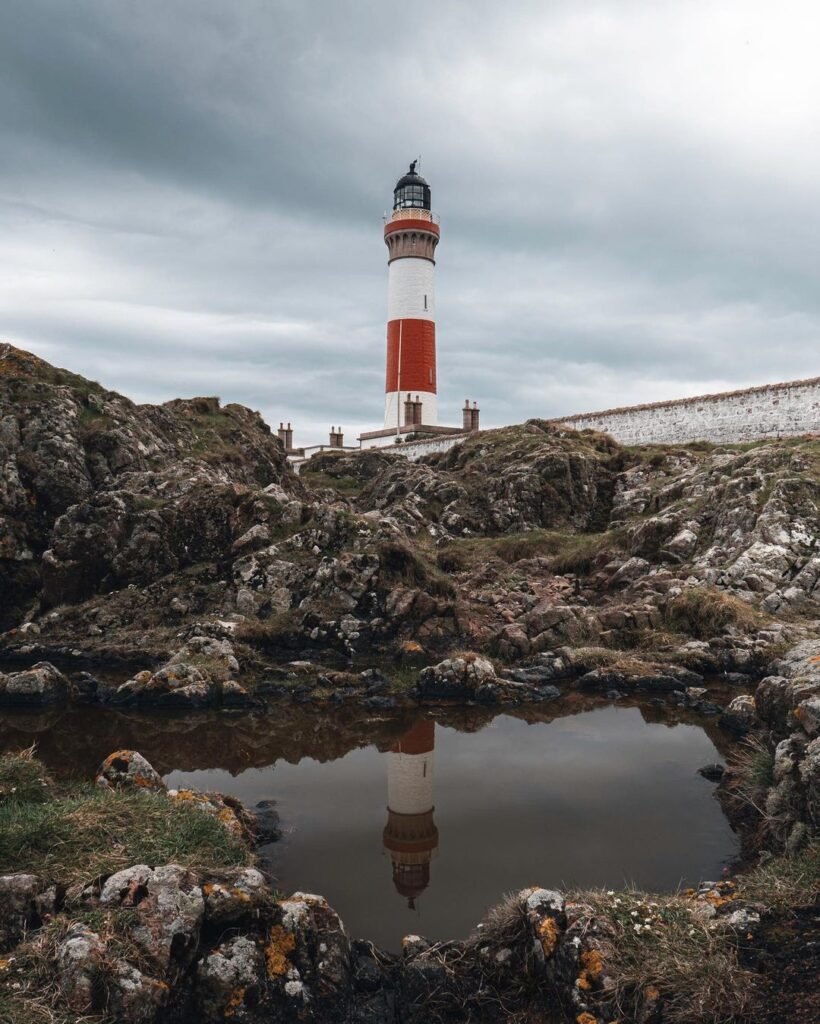 The elegant red bricks of the Butt of Lewis Lighthouse are fitting for a tower in such remarkable surroundings. Contrary to the name, it stands on the tip of the Isle of Lewis, where the white waves of the North Sea crash against the jagged cliffs. The sun catches the terracotta-coloured tower, casting a deep red shadow across the waves. Although the lighthouse is now automated, its place in history has been etched via the Guinness World Record books. As discovered to the dismay of the keepers, this spot of the Isle of Lewis was officially registered as the world’s windiest location and stayed so for many years. 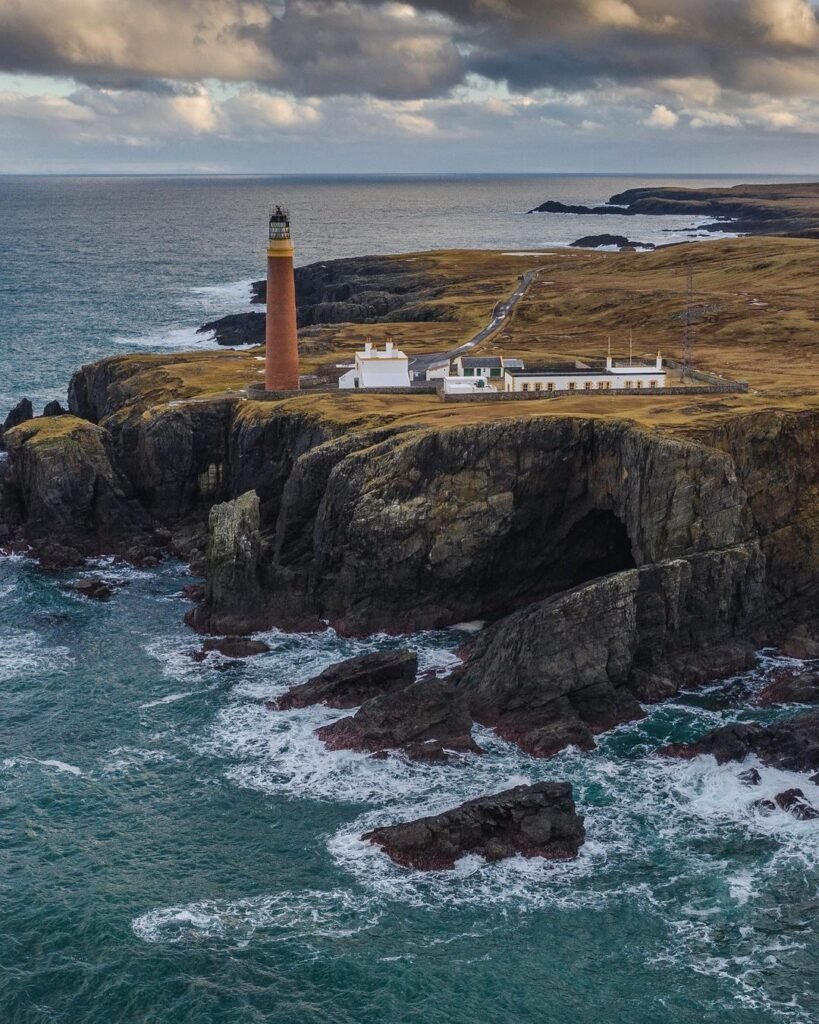 The Isle of Skye contains some of the most scenic locations across the whole of Scotland. From the breathtaking Quaraing to the titanic Dunvegan Castle, the island is full of striking images that stay with visitors forever. On the western jut of the rock stands one such spot – the lighthouse on Neist Point has shone for over a century and is one of the few of its kind to be listed as a Category B building.

The landscape surrounding the lighthouse is equally beautiful. Although the coastal path is not suitable for all weather conditions, in a calm climate visitors can witness incredible views of both the North Sea and the rolling craigs of Skye. 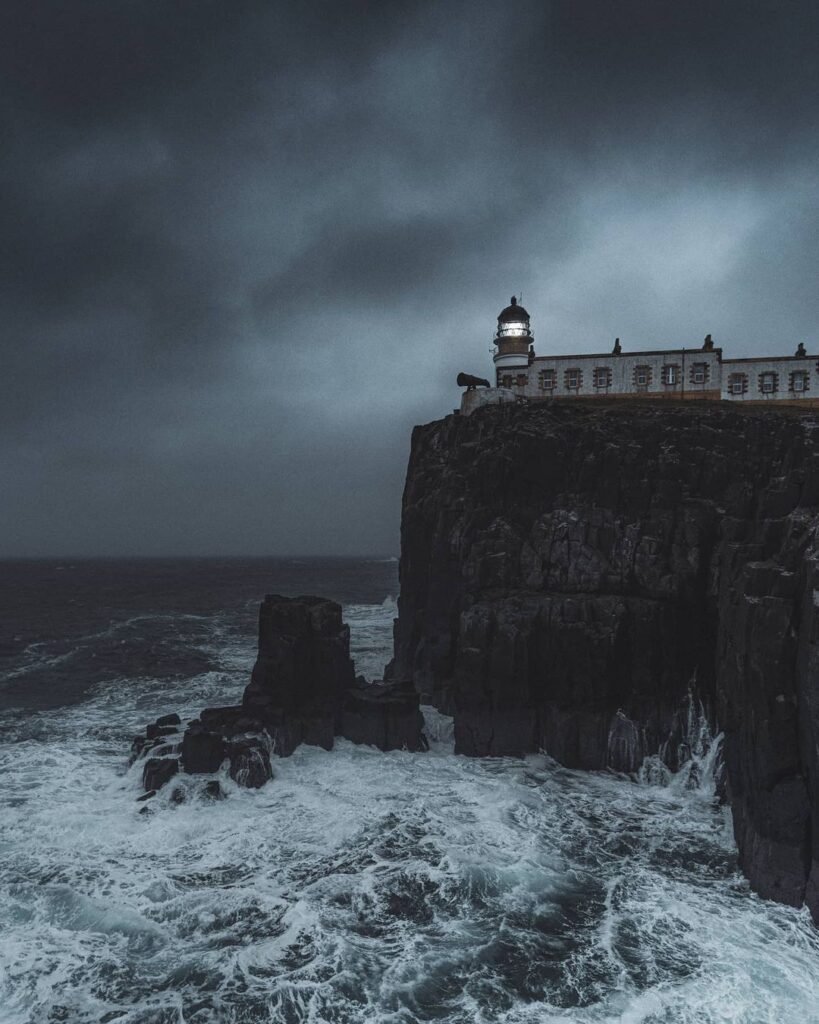 Built by brothers David and Charles Stevenson, the lantern of Rattray Head Lighthouse stands 120 feet high above the banks of the North Sea. It is a dramatic structure, rising out of the water seemingly from nowhere, as the causeway is only visible at low tide.

The erecting of the light was an arduous process, with 46 years passing between initial plans and the final construction. As such, numerous historical shipwrecks are scattered throughout the surrounding beaches, a testament to the “foul ground, rapid tides and high and dangerous seas” prevalent in the area. No matter how delayed the creation was, the number of lives saved by the Rattray Head Lighthouse cannot be counted. 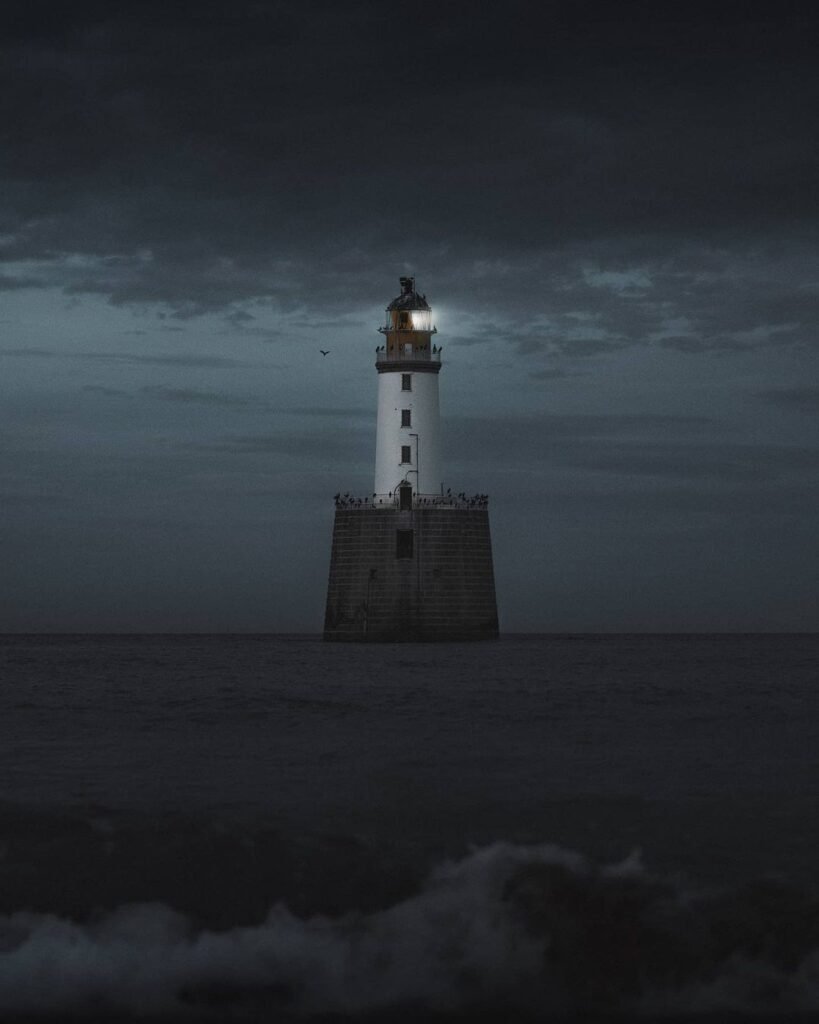 The remote and rugged beauty of Stoer makes for an incredibly dramatic scene, especially in a typically harsh Scottish climate. Looking out over the Old Man of Stoer, the lighthouse is an elegant, homelike structure on top of a coastal hill. Now rented as accommodation, the Stoer lighthouse gives stayers an unforgettable holiday experience.

Official records show that at least 24 ships were wrecked annually in the Stoer area prior to the lighthouse’s creation, although these reports were only established early in the 19th century. The choppy waters of the North Sea were, and continue to be, incredibly treacherous, making the lighthouse itself an invaluable contribution. 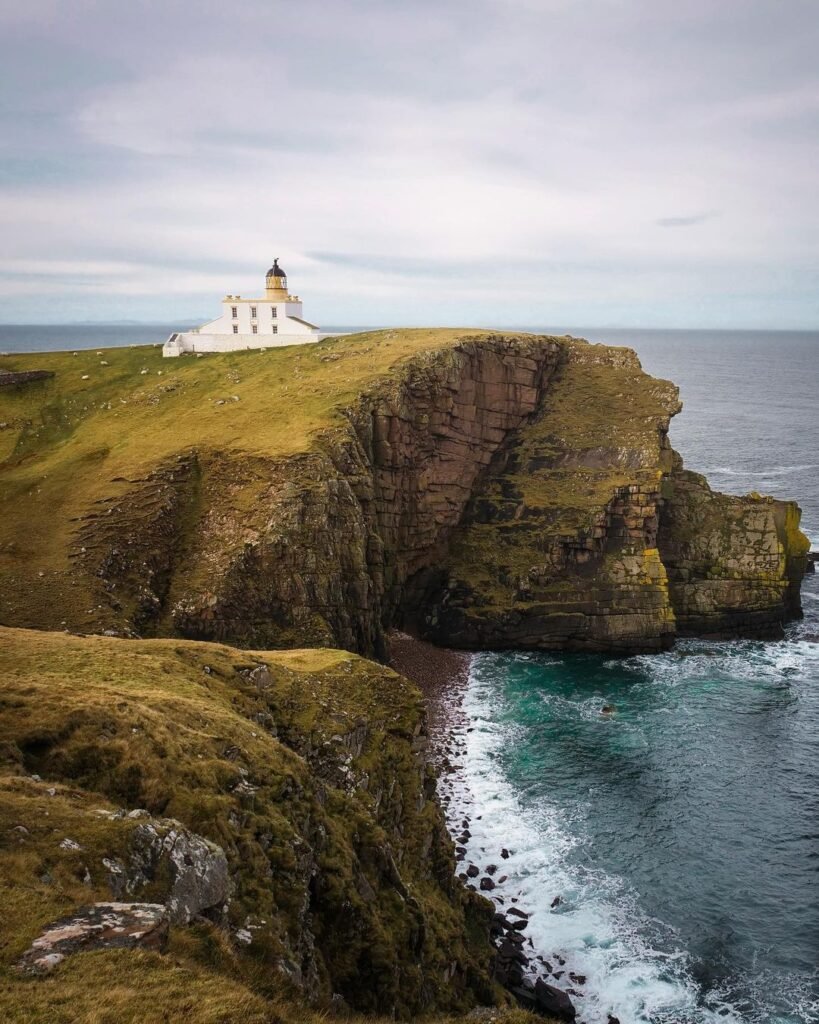 One of Scotland’s poles, climbers at the top of the Mull of Galloway Lighthouse can even glimpse the craigs of Ireland when the clouds are parted. Despite its height and viewing opportunities, there are only 115 steps in this Robert Stevenson designed lighthouse. This is partly due to its placement on the summit of a 260-foot clifftop, quite literally gazing off the edge of Scotland.

The now automated lighthouse now contains a small museum, where visitors can see the original engines and several of the lights used throughout its storied history. Guided tours are held daily, eventually ending in the lighthouse’s café, with stunning views to accompany delicious coffee and cake. 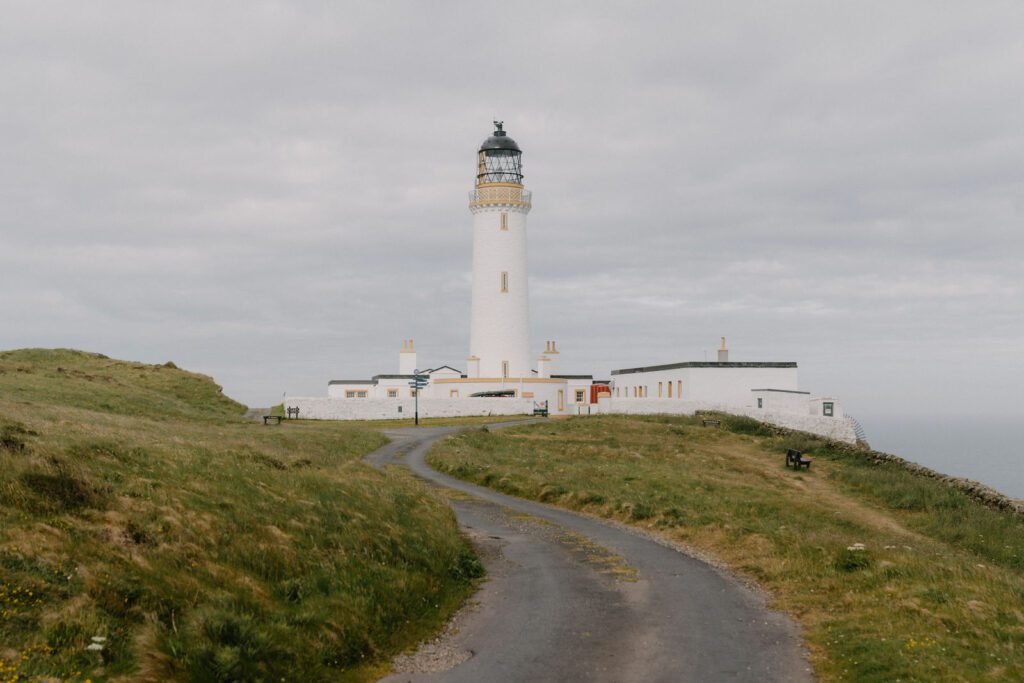 Set on the remote Shetland, the Sumburgh Head Lighthouse is the oldest of its kind on the island. £5.4 million was recently invested into the lighthouse, rejuvenating the centuries-old paintwork, and giving the structure an overall rejuvenation. Making use of the staggering, almost gothic surroundings, the tower on Sumburgh Head is one of the most visibly stunning buildings in Scotland.

First constructed in 1821, this was the eighth lighthouse designed by Robert Stevenson. Seven years prior, the architect visited the area with seminal Scottish author Sir Walter Scott, who later drew inspiration from the spot for his novel The Pirate. In tribute to Robert’s ingenious work, the Stevenson centre was constructed in April 2014 alongside his restored lighthouse.

Built following the tragic sinking of the ship Martello, St Abb’s Head Lighthouse marks a particularly dangerous area of water on Scotland’s east coast. This is partly due to the rough winds that disrupt the waters, and partly the area’s tendency to produce extremely thick fog.

The lantern itself is contained within an elegant black cage, acting as a kind of magnifying glass for the powerful light. This is lifted a total of 555 feet above sea level, as the lighthouse itself is built upon the colossal 300-foot cliff. The need for a clearly noticeable signal on St Abb’s was apparent, thus its fog siren was the very first of its kind in Scotland. 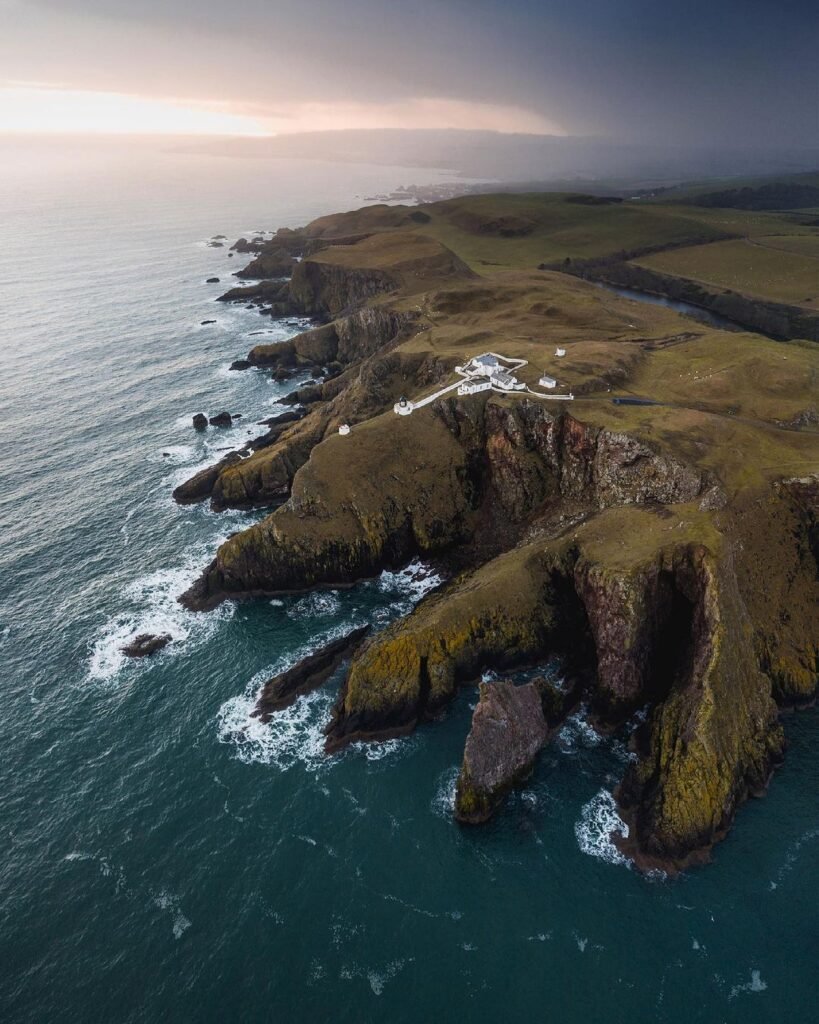 Surrounded by the Hebridean Islands on one side and Loch Sunart on the other, the Ardnamurchan peninsula marks the most western point on the British mainland. The lighthouse itself is a stark building, made of strong pink granite harvested from the nearby Isle of Mull. Its tall, obelisk structure makes it the only British lighthouse to be made in the Egyptian style.

Now owned by the area’s communal trust – a group of volunteer helpers who bought the complex to represent the local residents as a whole. Their passion ensures that this architectural achievement maintains its staggering beauty and continues to be a point of pride for the area. 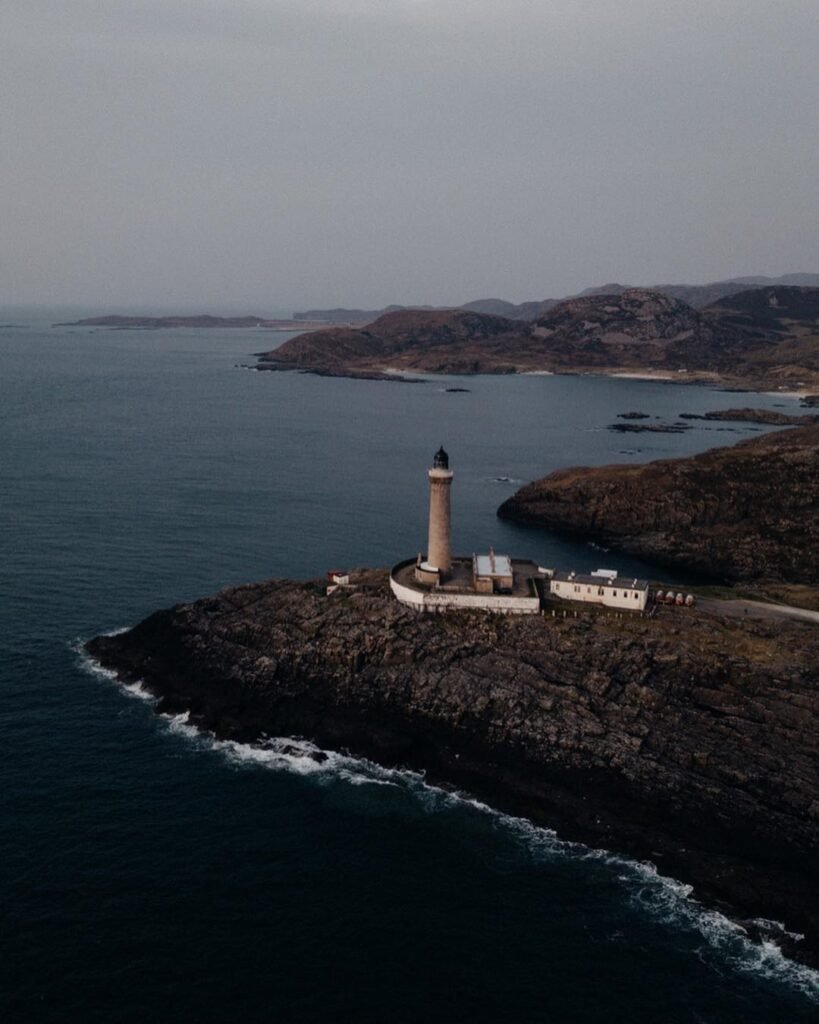 The volcanic island of Bass Rock is an iconic piece of Scottish geography that, despite its minute size, has inspired countless works within the nation’s culture. Having been everything from private property to a Presbyterian prison, Bass Rock’s history is far bloodier than one may assume.

Built in the first years of the 20th century, the rock’s lighthouse has the same rustic beauty as its surroundings. A hundred years in harsh Scottish weather has taken its toll on the tower, but each chip and blemish tells a different story. Bass Rock is an island that, despite its proximity to the mainland, has a remarkable air of distance, and its lighthouse maintains that sense of untamed wildness. 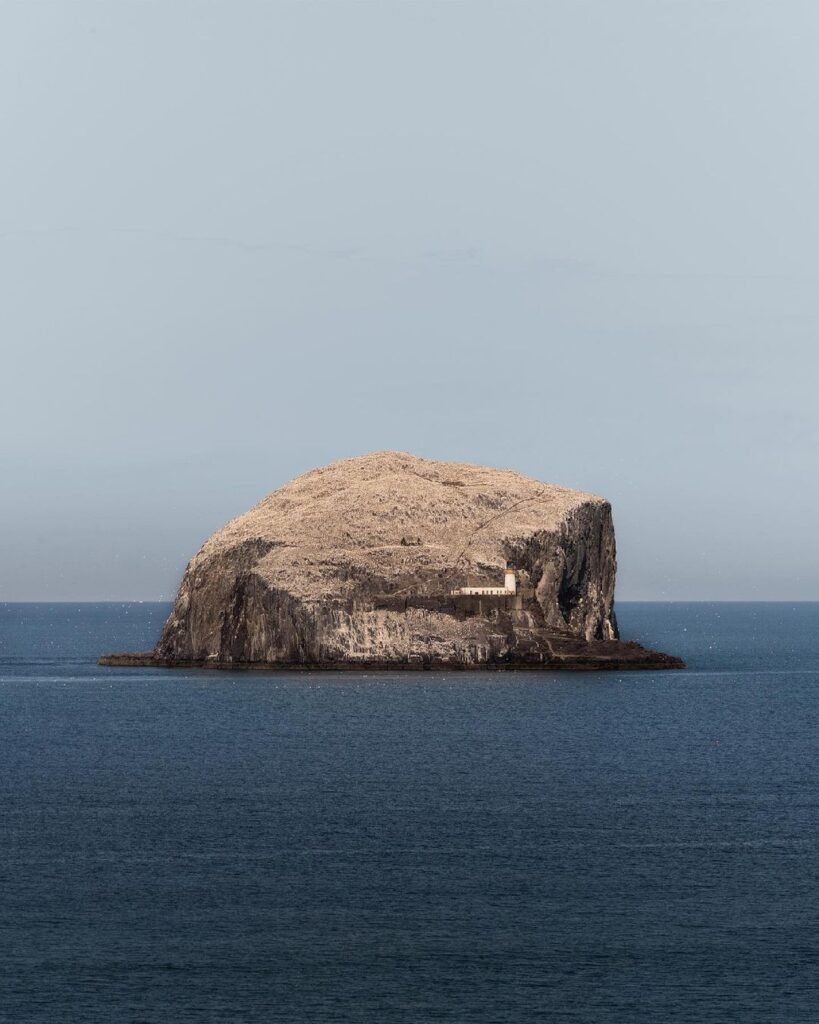 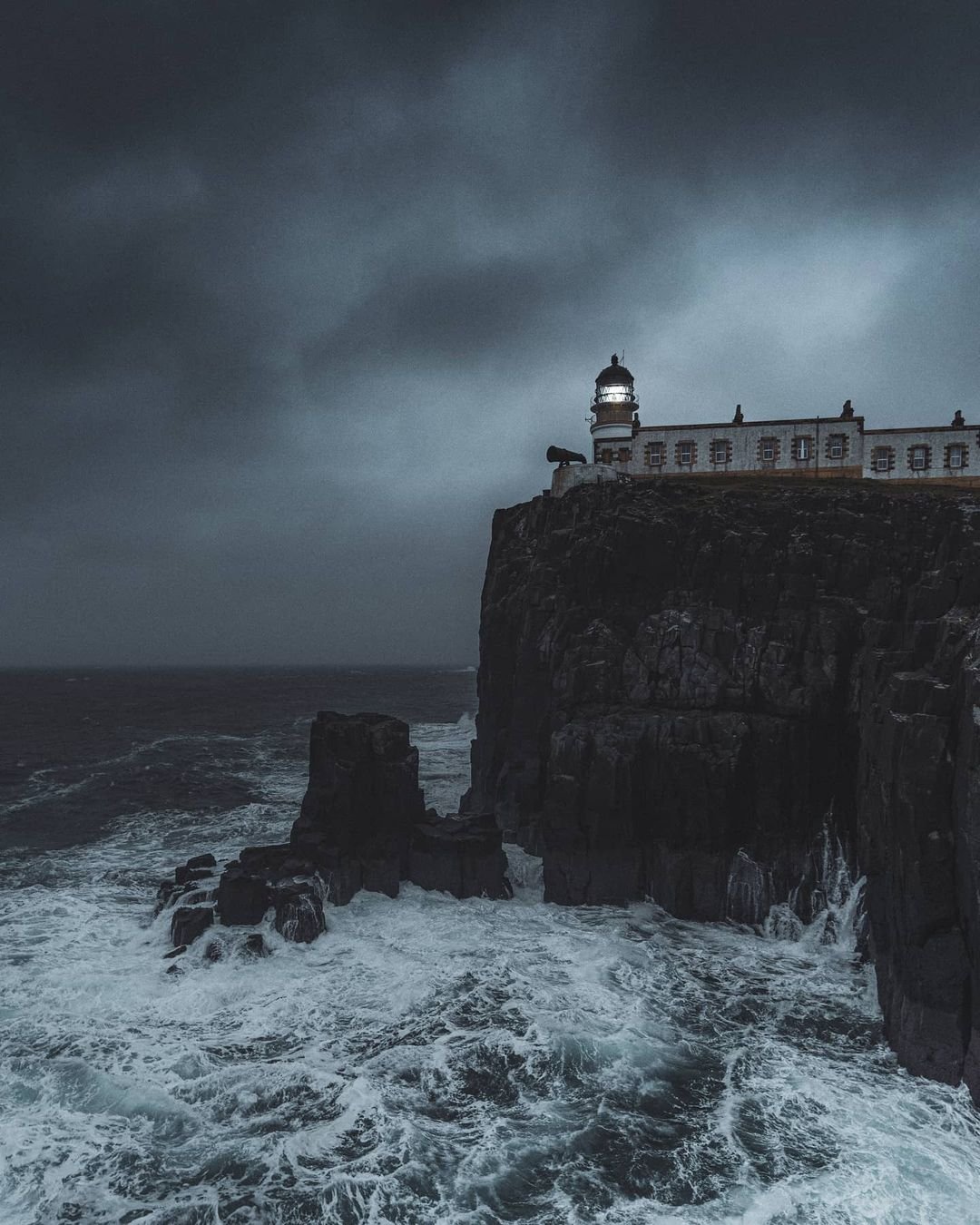