the coastal villages of FifE

The seaside villages of Fife are some of the prettiest in Scotland. Beautiful beaches, historic harbours and ruined castles make for a charming coastal kingdom.

You could take in each of these stunning locations by walking the length of the Fife Coastal Path.

The 117-mile trail meanders south to north from the Firth of Forth to the Firth of Tay and would take around a week’s ramble to complete. Or you could choose a section to stroll between these charming villages.

Considered the capital of the East Neuk of Fife, Anstruther is a busy seaside settlement divided in two by the Dreel Burn, itself a source of fish for centuries.

Anstruther has a host of amazing local attractions. Take a pleasure cruise out to the isle of Islay to see the puffins, pay a visit to the Scottish Fisheries Museum, and enjoy award-winning fish and chips at Anstruther Fish Bar.

Delve into the Cold War era at Scotland’s Secret Bunker. Built deep below an innocuous farmhouse, and accessed by a 450-feet tunnel, you pass through the blast doors to witness the 1950s stronghold. Inside are the command centre, dormitories and radio rooms constructed to house government officials in the event of a nuclear war. 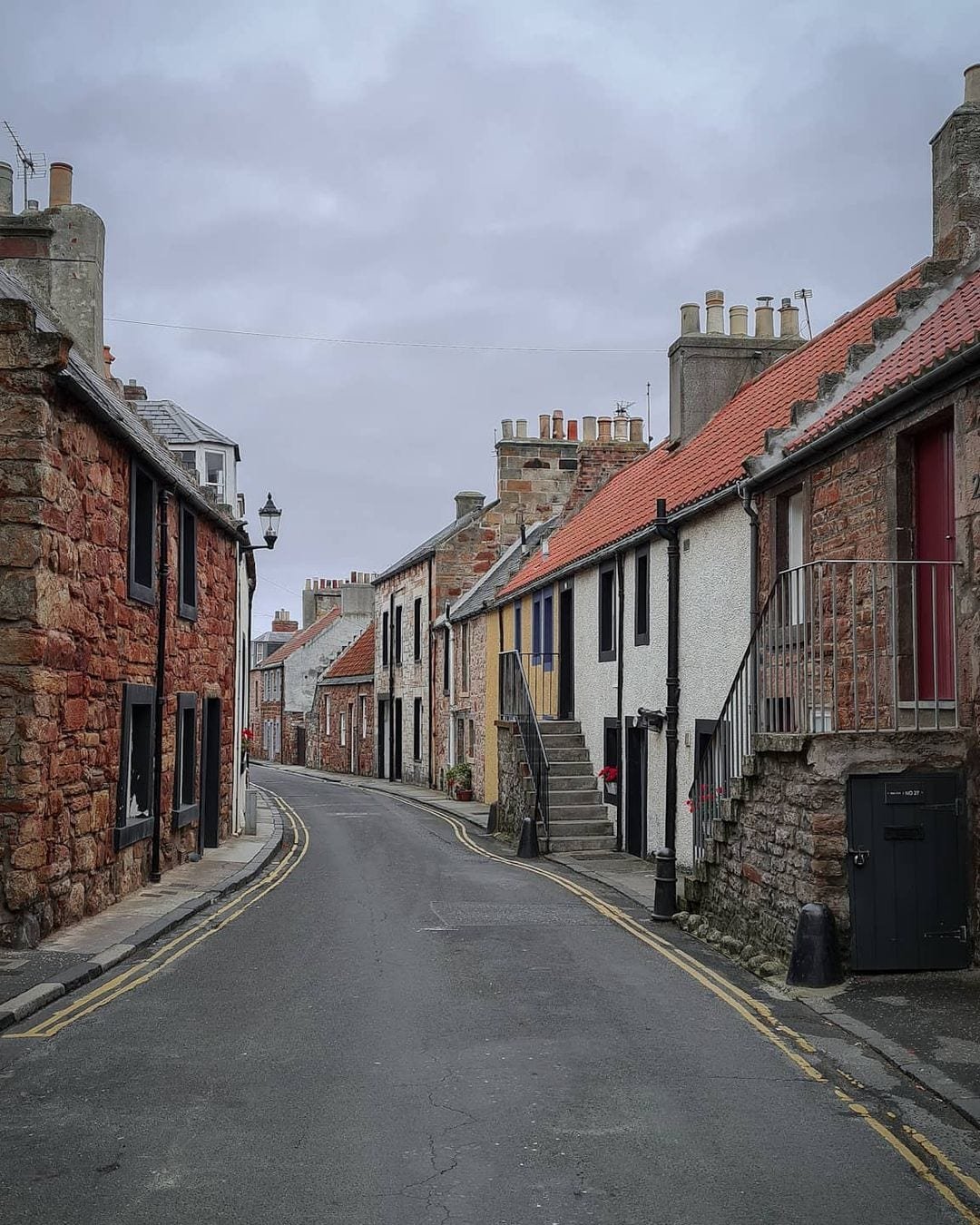 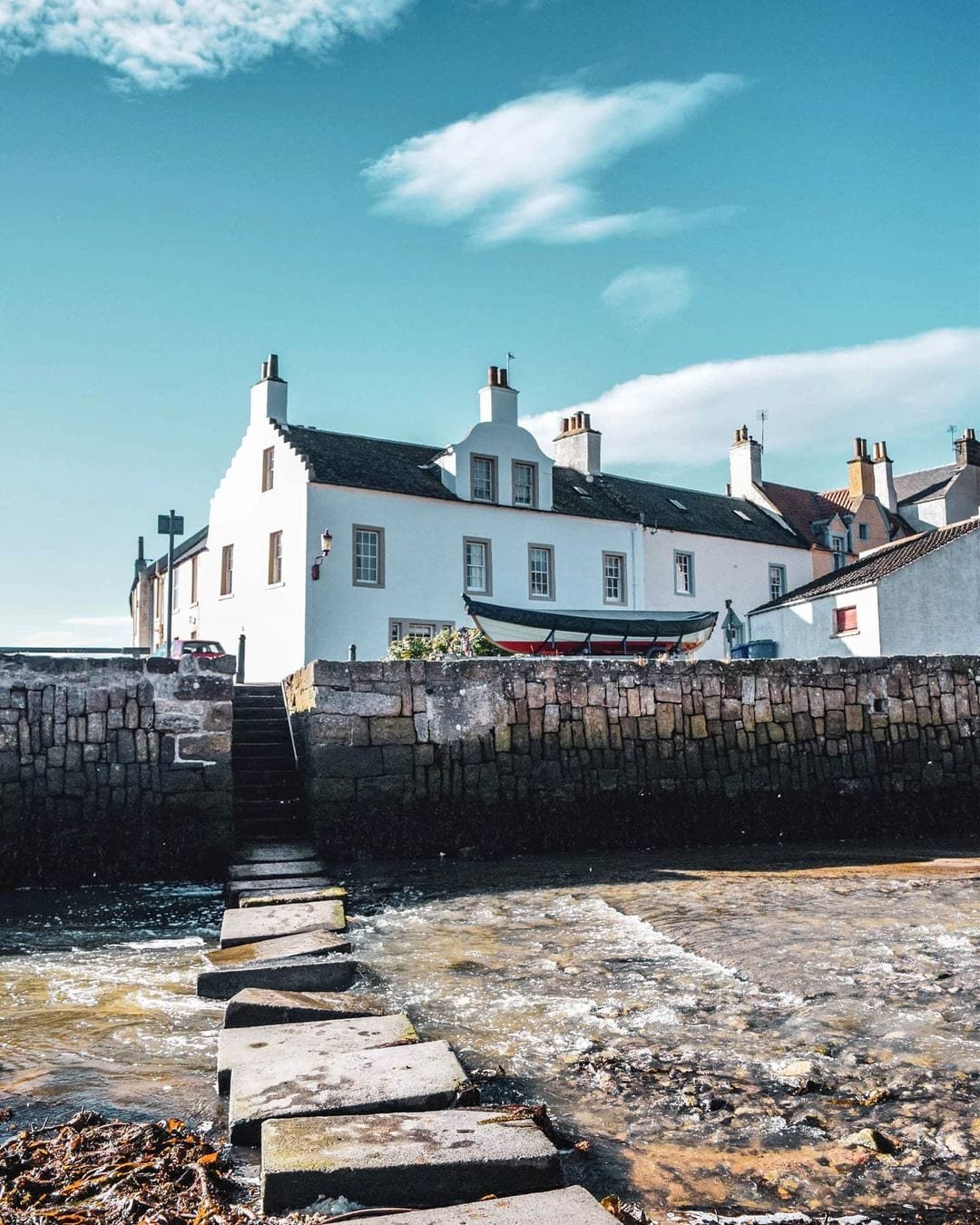 The village of Crail lies a 10-mile walk along the coastline from Anstruther. A walk along the coastal path passes the Caves of Caiplie. Cut by the sea, the series of caves was once a site of early Christian worship for monks and pilgrims. Crail is the furthest north of the East Neuk villages and was a major port from the 13th and 14th Centuries. The Crail museum in Marketgate pays homage to the unique past of the village, encompassing seafaring tradition and military history. The cobbled streets of Crail wind their way down to the village’s small walled harbour and adjacent sheltered beach. Stop for a while to take in the view and enjoy fresh crab and lobster from Reilly’s seafood shack. To the north lies Crail golf course and Crail Airfield, one of the best-preserved in the UK. A short way to the south of Anstruther lies the ancient village of Pittenweem, which remains the busiest of the East Neuk fishing ports.

Each morning the fish market bustles in the sheds of the harbour with a handful of local inns offering refreshment once the catch of the day has been sold.

Pittenweem high street sits above the harbour with a selection of local traders and art galleries to greet visitors. Each August the Piitenweem Arts Festival takes over the town. The parish church at the east end of the main thoroughfare dates back to the 14th Century and was once part of Pittenweem Priory. St. Monans is named after the saint who was either martyred (accounts differ) by raiding Danes or Norsemen on the Isle of May in either the 6th or 9th Century.

Today, the village of St. Monans is dotted with pretty whitewashed houses surrounding the harbour with its uniquely-shaped zig-zag breakwater. St. Monans has three piers and was once the home port for over 100 fishing vessels and a shipbuilder which closed in the 1990s after two centuries in operation.

A short walk from the settlement sits St Monans windmill – a 1770s relic of the salt panning industry which once dotted the coast. A short way to the west, atop an impressive cliff location, are the crumbling ruins of Newark Castle. Once the seat of notable families, today the crumbling stones echo with the past to evoke a mysterious atmosphere. 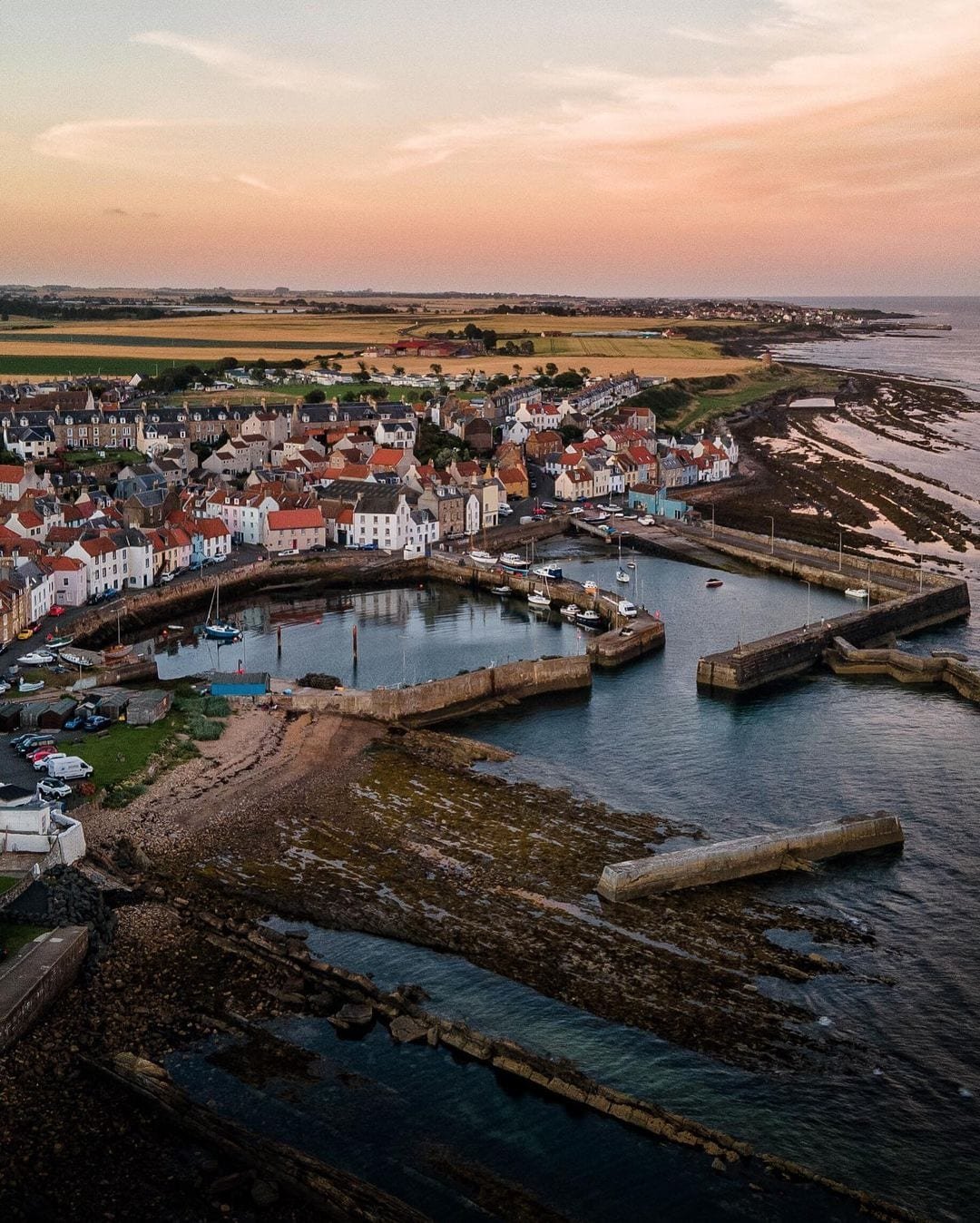 Further down the coast from St. Monans is the seaside resort of Elie, long a popular retreat for Scots seeking some ocean air. Elie’s jewel is its stretch of mile-long golden sand. At low tide, the harbour beach links to Earlsferry Beach, which is lined by colourful huts and rolling sand dunes. Elie’s current harbour dates to the 16th Century. In days gone by, pilgrims on their way to St. Andrews would depart the previous landing point. Nowadays, the harbour bustles with sailing yachts and windsurfers, and pleasure seekers can take the boat to the Isle of May. Five miles inland from Elie is the historic Kellie Castle. Now operated by the National Trust of Scotland, the earliest parts of the structure date to the 14th Century. Large parts of the building were restored in the 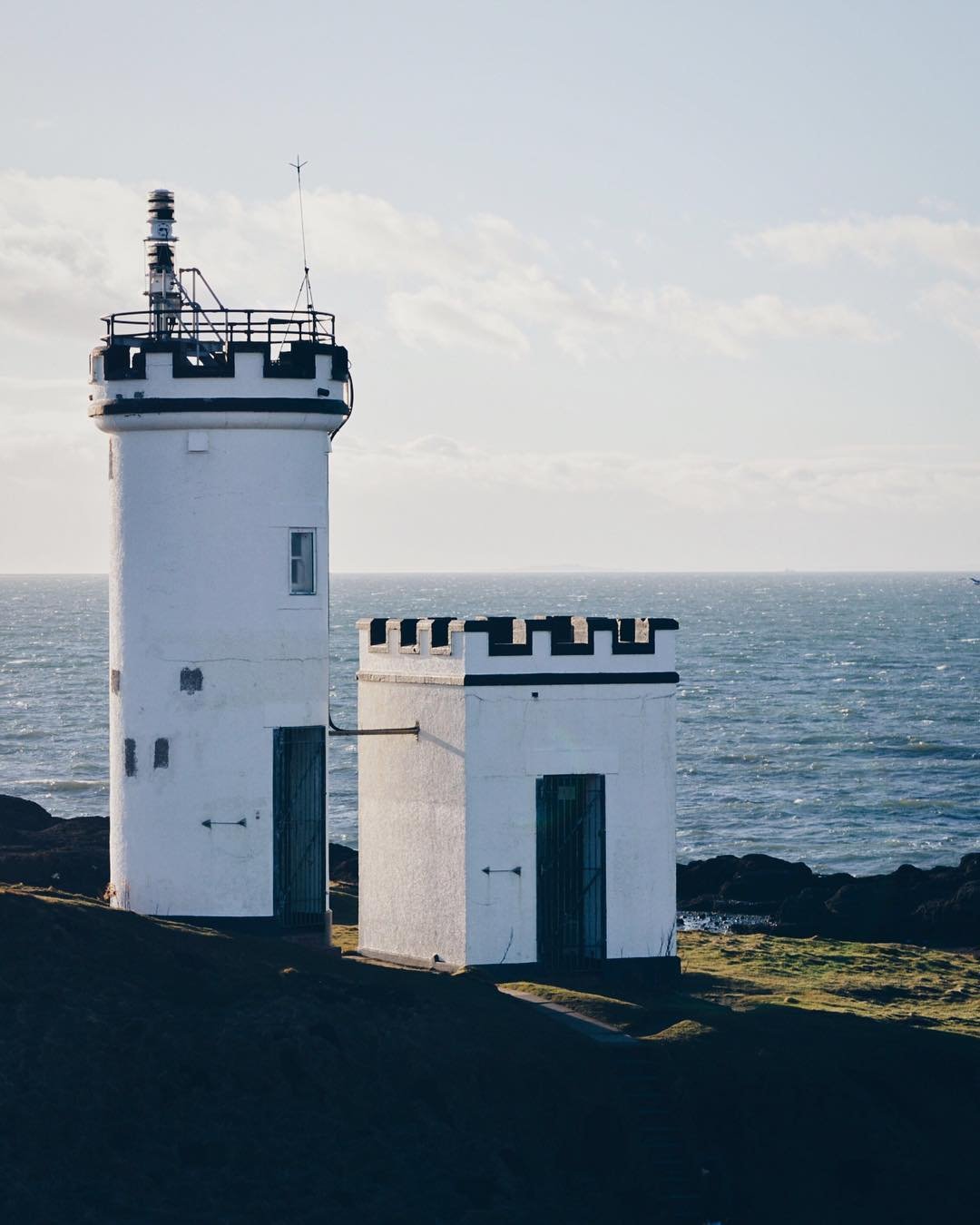 Cruising southerly to the north shore of the Firth of Forth brings us to the historic village of Aberdour.

The harbour at Aberdour is naturally formed by the Dour Burn estuary. Victorians flocked to the village aboard pleasure steamers from Leith to enjoy its views across to Edinburgh and the Pentland Hills beyond.

Today, Aberdour is a genteel resort popular for its sands, delightful hotels and restaurants.

A settlement since medieval times, Aberdour looks out to the island of Inchcolm and its abbey. A five-minute walk from the centre of the village takes you to Aberdour Castle, one of the two oldest datable castles in Scotland and once home to the Regent of Scotland. 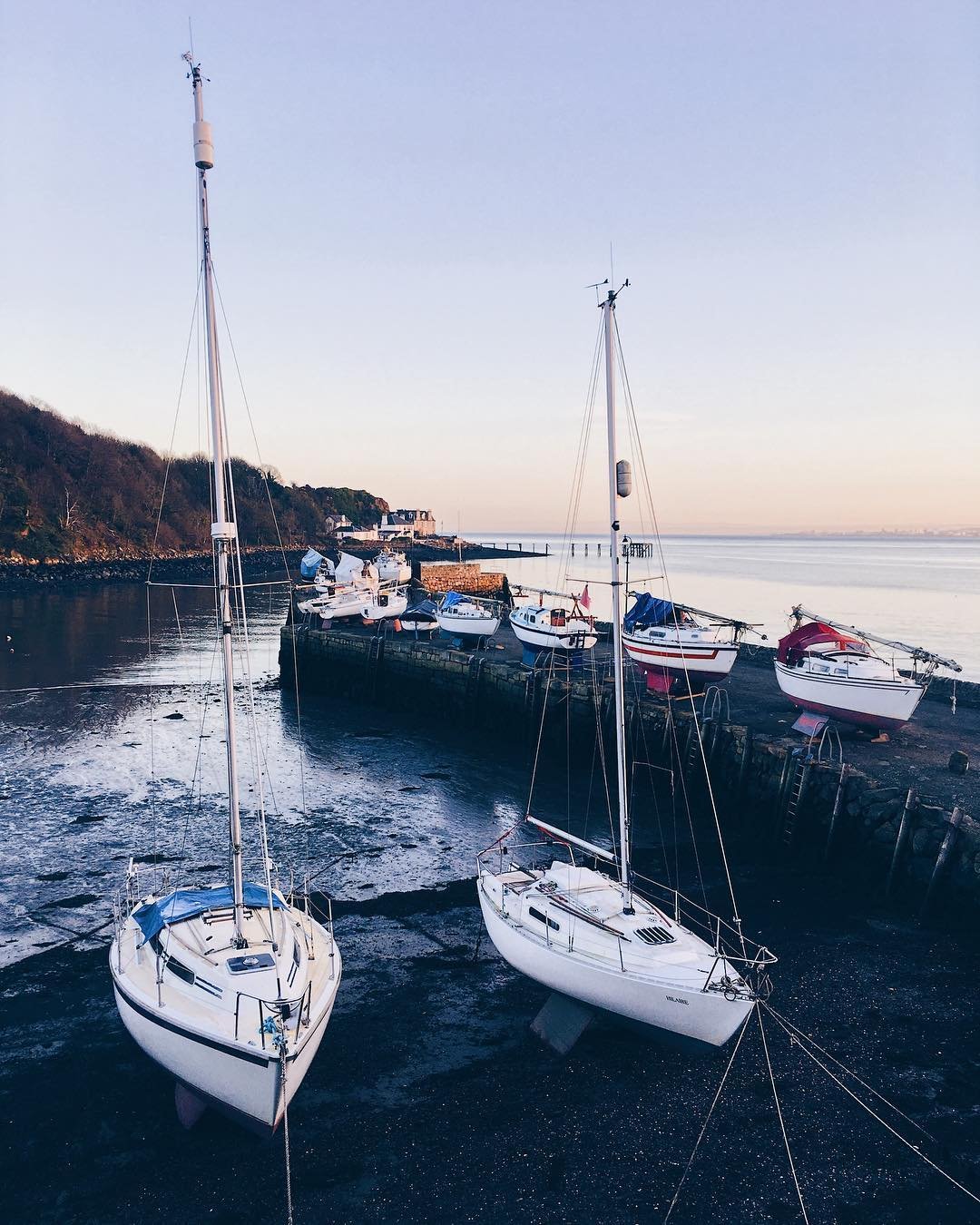 Culross was once a busy trading centre, from which salt and coal were exported until the 18th Century. Much of the village has been carefully restored and preserved by the National Trust of Scotland. The result is a picture book setting and a favourite with TV and film companies.

Culross Town House with its prominent clock-and-bell tower once housed a witch’s prison and later the local council chamber and courtroom.

The Palace of Culross sits in the heart of the village. This former merchant’s house dates to the 16th or 17th Century and is home to beautifully restored gardens. A short walk from the palace lies the ruins of Culross Abbey dedicated to St. Mungo, thought to have been born in the village. 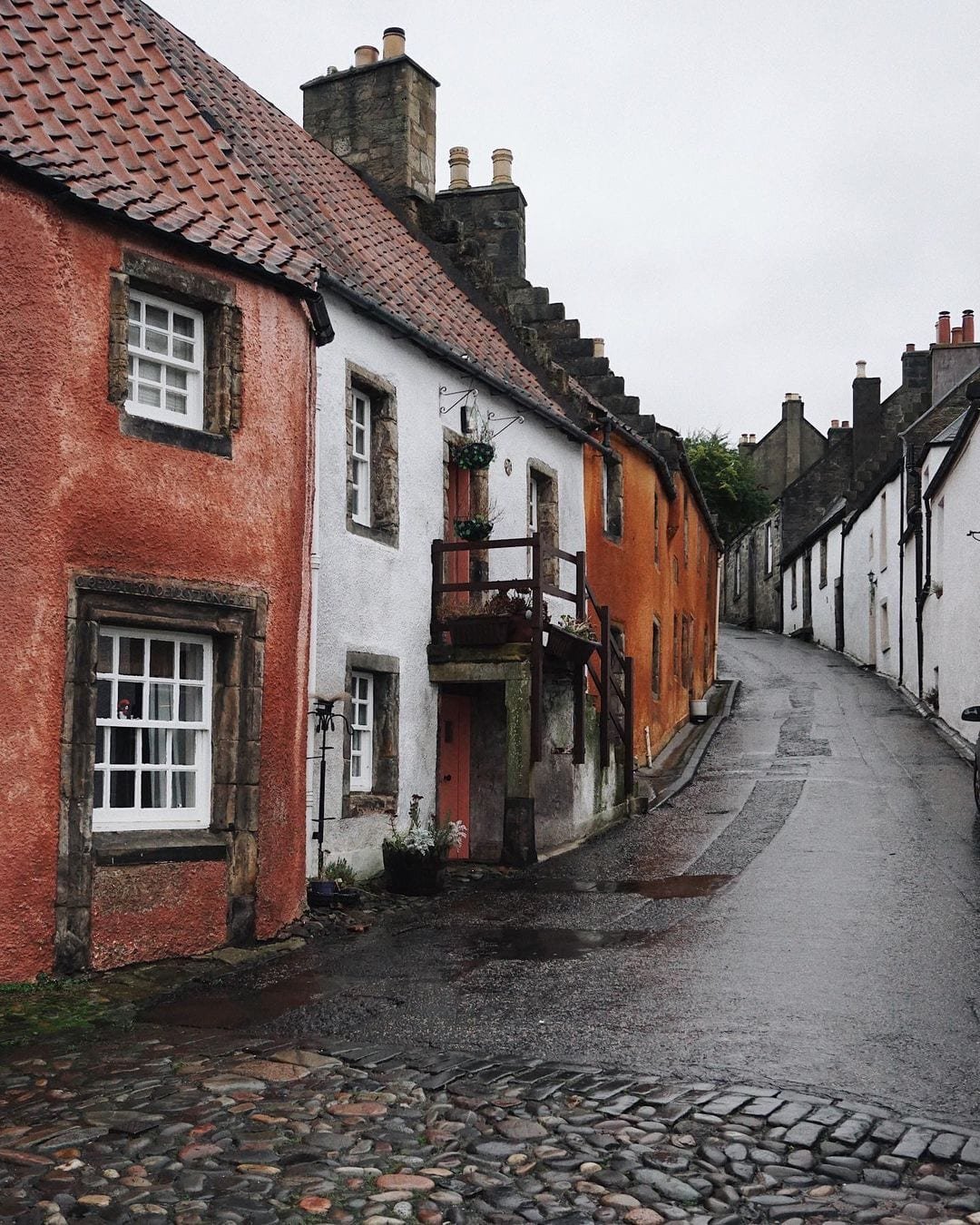