Glasgow is a treat for architecture buffs. From medieval ruins to Victorian and Edwardian Gothic masterpieces to contemporary design, the city’s iconic buildings all have a story to tell – and intricate designs and designers to uncover. Don’t know where to start? These are our favourites of Glasgow’s architectural wonders.

Home to the Glasgow Museum of Transport, the distinctive, contemporary design was brought to life by Zaha Hadid Architects. Set with the former A & J Inglis Shipyard in Glasgow Harbour, the museum was opened in 2011 and displays over 3,000 objects related to transportation in and around the Glasgow area. The museum also won the 2013 European Museum of the Year Award. 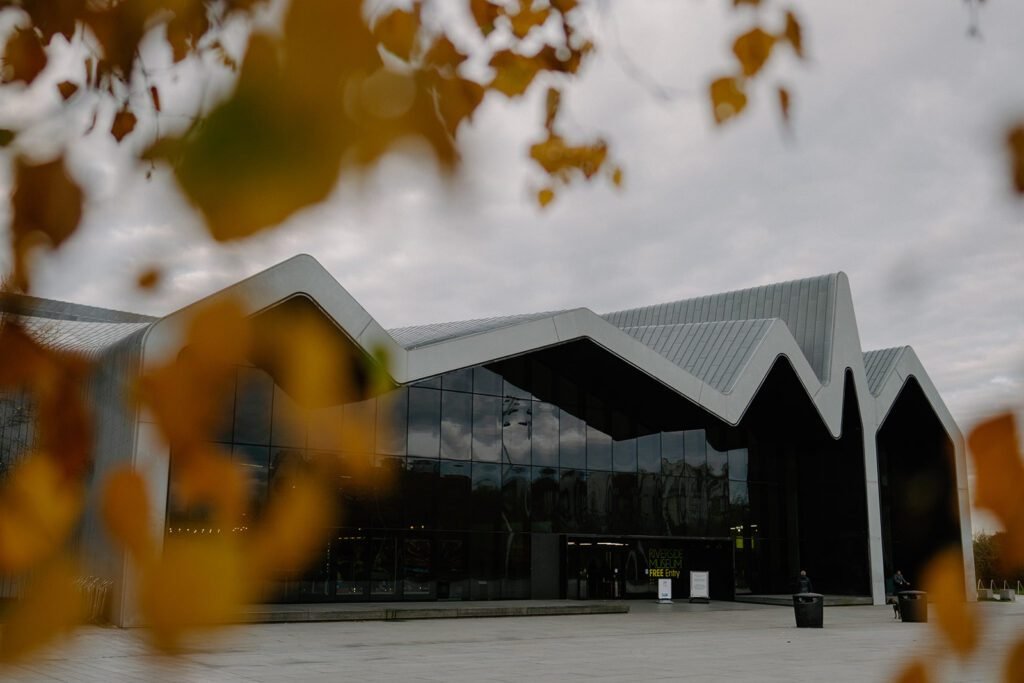 Opened in 1898, this quintessentially Victorian building has retained much of its opulent and Gothic grandeur. Built to give the people of Glasgow’s East End a cultural centre, city engineer Alexander B. McDonald was tasked with building a place that would be ‘open to the people for ever and ever.’ Also featuring a large, glass conservatory for its winter gardens, the palace was closed in 1990 for restorations – with local artist Ken Currie commissioned to paint new work into the domed ceilings. 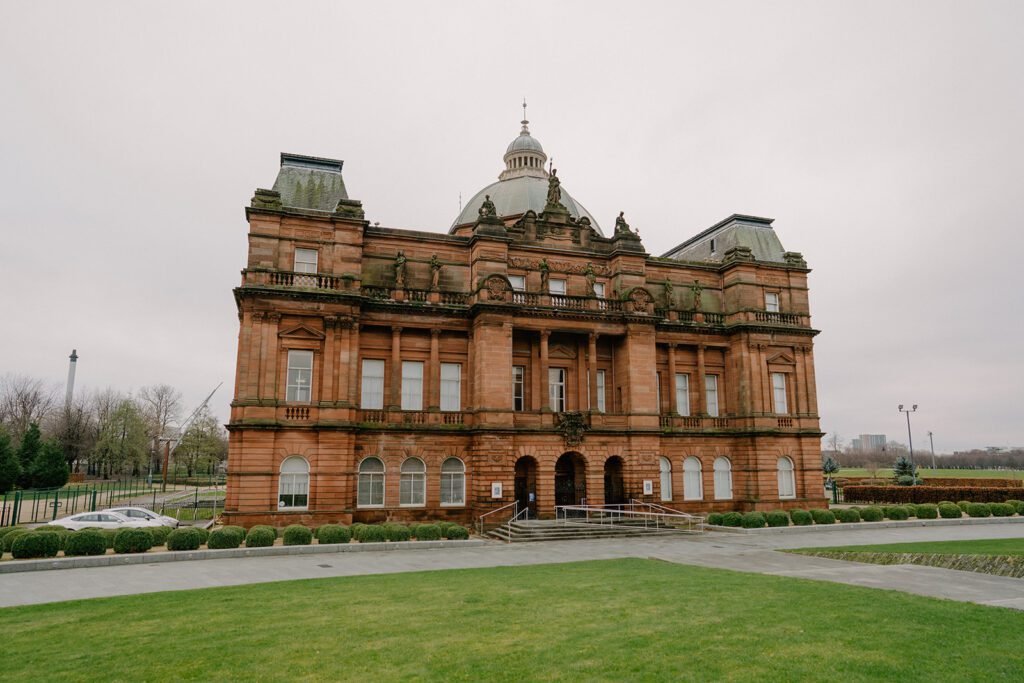 One of Glasgow’s most famous and beautiful buildings, the headquarters for Glasgow City Council have retained much of their Victorian civic charm. Officially opened by Queen Victoria in 1889, the prize-winning design of architect William Young became the blueprint for this grand building. With its practically palatial interiors, featuring marble, gold-leaf and stained glass, tours can be taken daily around the chambers.

Serving nearly 600,000 people, the enormous public Mitchell Library is truly an architectural wonder worthy of the palaces of Europe. Officially opened in 1911 – after Andrew Carnegie had laid the first stone in 1907 – over 1.2m books can be found in the library. The Category B-listed building is considered to be of the Edwardian Baroque design and is also home to the Glasgow City Archives – often featured on the BBC’s ‘Who Do You Think You Are?’

The centre of Scotland’s architecture and design world, The Lighthouse is a hub of Glasgow’s creative energy. A multi-use space including a visitors centre, events and exhibition area, the building was the former home of the Glasgow Herald. It was also the first public commission building actually completed by architect Charles Rennie Mackintosh, who worked on many buildings and interior spaces across Glasgow.

Dedicated to Saint Mungo, the patron saint of Glasgow, this cathedral is one of a handful from the medieval era that has remained relatively intact following the Reformation of Scotland. The cathedral has long been visited by royalty, most recently by Queen Elizabeth II to celebrate her Diamond Jubilee. It also remains one of the best examples of Gothic architecture in Scotland – not dissimilar to other cathedrals around the country. 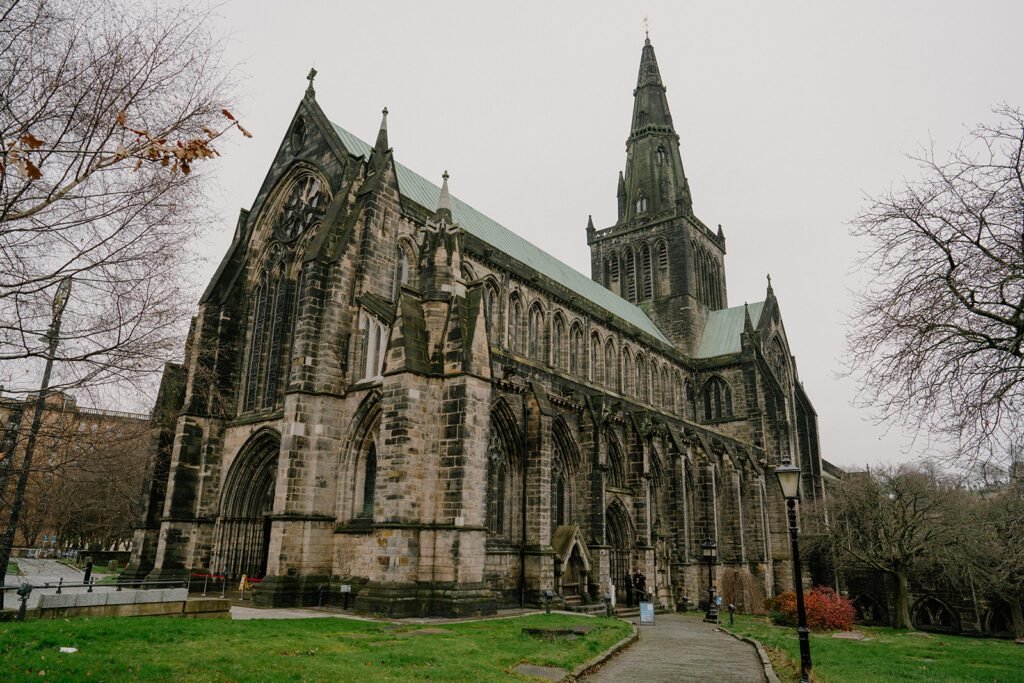 Covering 22 different galleries, Kelvingrove on Argyle Street welcomes millions of visitors each year to its variety of exhibitions. Opened for the first time in the back half of the 19th century, the museum was originally opened in a private mansion just a few miles from the current site, before being expanded into the sprawling red-brick museum. Now refurbished, the museum is one of the most visited in the UK, outside of London. 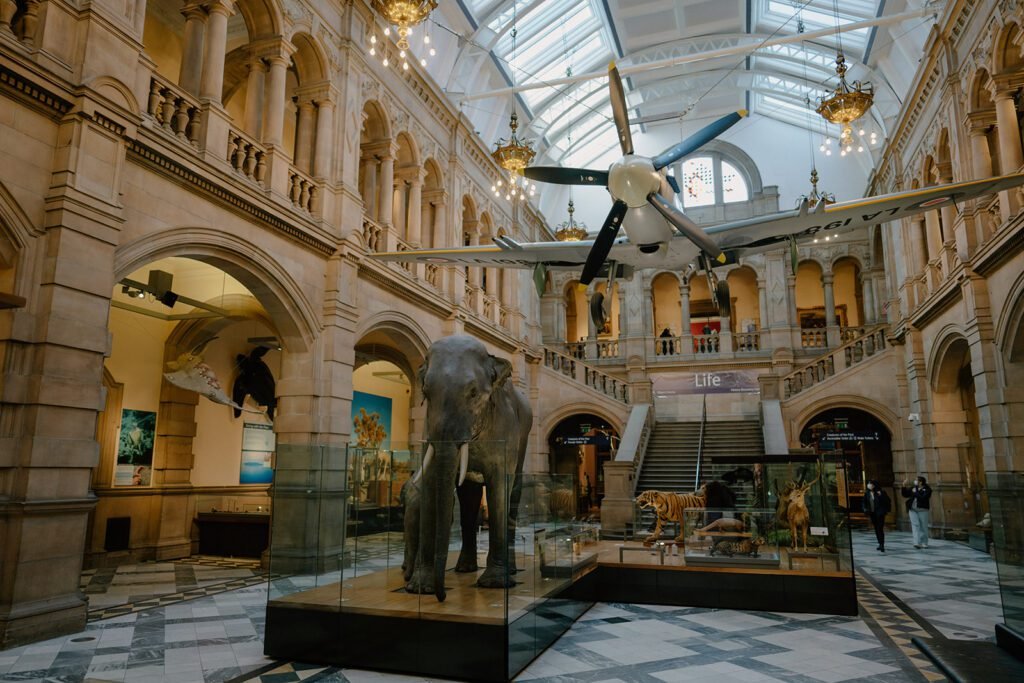 A stout steeple built close to the nearby church, the Tron Steeple is the last remaining piece of the church it was originally built to service. When said church burned down in a fire in the 1790s, the steeple remained unharmed and remains a unique building within the street. With four levels of salmon-coloured brick topped with a blue clock and Gothic style roof, the steeple now serves the Church of St Mary of Loreto and St Anne.

Built in the Gothic revival style, the University of Glasgow sits atop a hill overlooking the rest of the city. The fourth oldest university in the English-speaking world and one of Scotland’s four ‘ancient universities’, Gilmorehill is perhaps the most spectacular building of the university. Designed by Sir George Gilbert Scott, the building features an old-fashioned bell tower and views over the nearby River Kelvin. 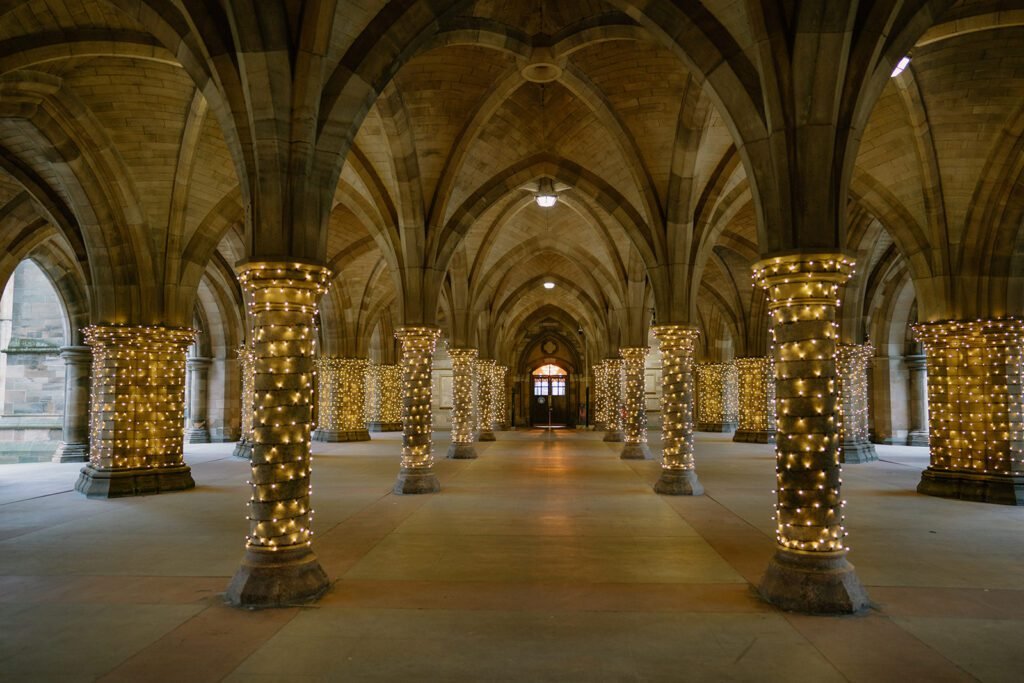 The oldest theatre in Glasgow, the Theatre Royal was given a huge refurbishment and makeover, transforming its exterior and general interiors into a sleek, contemporary space – whilst preserving the Victorian charm of the theatre itself. Now the home of the Scottish Opera and Scottish Ballet, the longest-running theatre in Scotland retained the auditorium design of Charles Phipps in the late 19th century when Page/Park Architects redeveloped the theatre for modern use.

Templeton on the Green

Found near the People’s Palace, Templeton on the Green was once a carpet factory designed for James Templeton, who became one of Britain’s most influential textile manufacturers. The building was designed in the Venetian Gothic style, with direct inspiration being taken from the Doge’s Palace in Vienna. No longer a textile factory, the building now incorporates office space, apartments and the WEST brewery.

A former Great British Railway Hotel from the 19th century, the Grand Central Hotel has been a truly historical spot since its opening in 1883. Designed in the Queen Anne style with intricate detailing in its exterior, the hotel was the very first place long-distance television pictures were transmitted in 1927. The hotel has also been a favourite spot to stay for celebrities visiting Glasgow – memorable guests include JFK, Frank Sinatra and Winston Churchill.

Cataloguing the history of school education in the local area, this museum sits within the walls of an actual former school, designed by Charles Rennie Mackintosh. Considered one of the top architectural attractions in the city, it was designed in the Modern British Art Nouveau style of the 1880s and directly influenced by the design of Rowallan Castle in Ayrshire. Though the school itself closed in 1979, visitors can still experience what it was like to be educated there.

House for an Art Lover

Visit Bellahouston Park and you’ll find House for an Art Lover, a space dedicated to the designs and imagination of Charles Rennie Mackintosh. Initially, the house was supposed to be a country retreat, designed by Mackintosh, but now serves as a testament to architects, artists and designers who call Glasgow home and use the space to create brand new work.

Part of the University of Glasgow, this museum is dedicated to physician William Hunter and the oldest museum in Scotland. First opened in 1807, the museum was designed to compliment the neo-Gothic designs of the university and is home to much of Hunter’s archives. The museum also features a zoology collection, a modern art gallery and the Mackintosh House – a replica of the interior Charles Rennie Mackintosh’s own house. 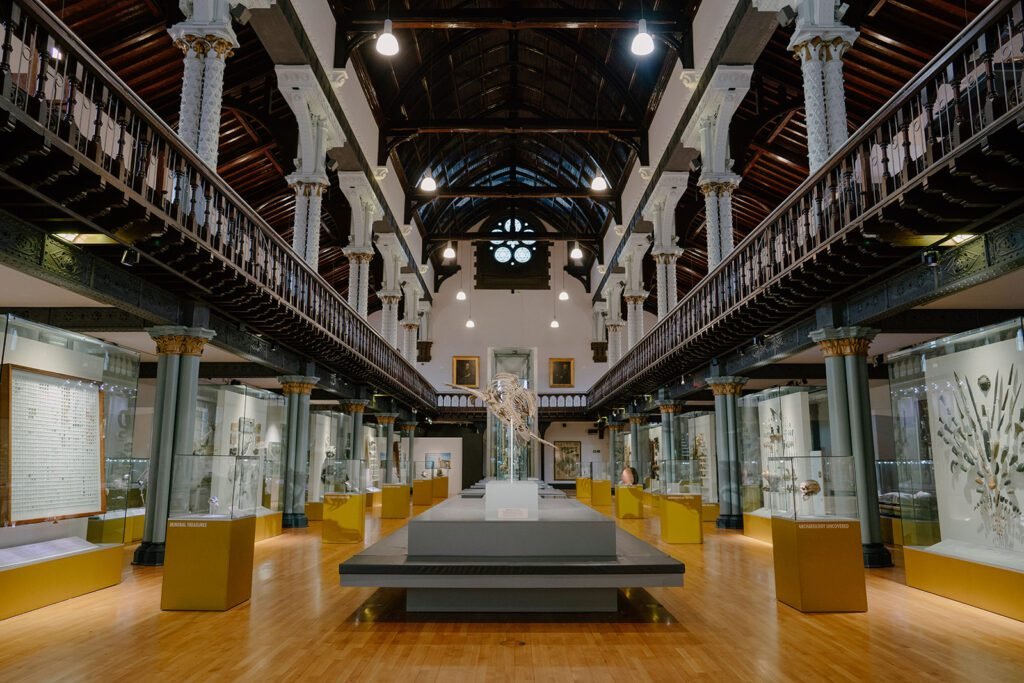 Founded in 1857 as music hall revues were taking the country by storm, this Victorian theatre is the world’s oldest surviving music hall location. Found in the heart of Glasgow, an old warehouse was converted into the theatre by Thomas Gildard and Robert H.M McFarlane above a pub – as many music halls were. Inspired by the theatres of maestro P.T Barnum, the theatre still lives on with local acts performing regularly.

A category-A Listed Building, the Govan Old Parish Church is believed to date back all the way to the 6th century. Its current iteration – built in 1888 – was designed by Robert Rowand Andersen, inspired by other abbeys in the region and sits on what is believed to be one of the oldest places of worship in the entire country. The church still welcomes congregants to services and visitors can see the church’s collection of carved stones from the original site.

Head for Glasgow’s South side and you’ll come across a building that’s not quite like the others. Holmwood House has a distinctly Greek feel to it – and was a family home built by Alexander Thomson, completed in 1858. Designed for businessman James Couper and his family, Thomson’s fondness for Grecian design meant the distinctive colouring and structure of the house bears a striking resemblance to a classical Greek temple.

Nicknamed ‘the Armadillo’ by locals, this grand auditorium in Glasgow seats 3,000 people for a multitude of events. Its nickname comes from the overlapped metal lines that look a little like the shell of an armadillo. First opened in 1997 on the banks of the River Clyde, the venue’s designers Foster and Partners were inspired by interlocking ship hulls as the auditorium sits on the old site of the Queen’s Dock. 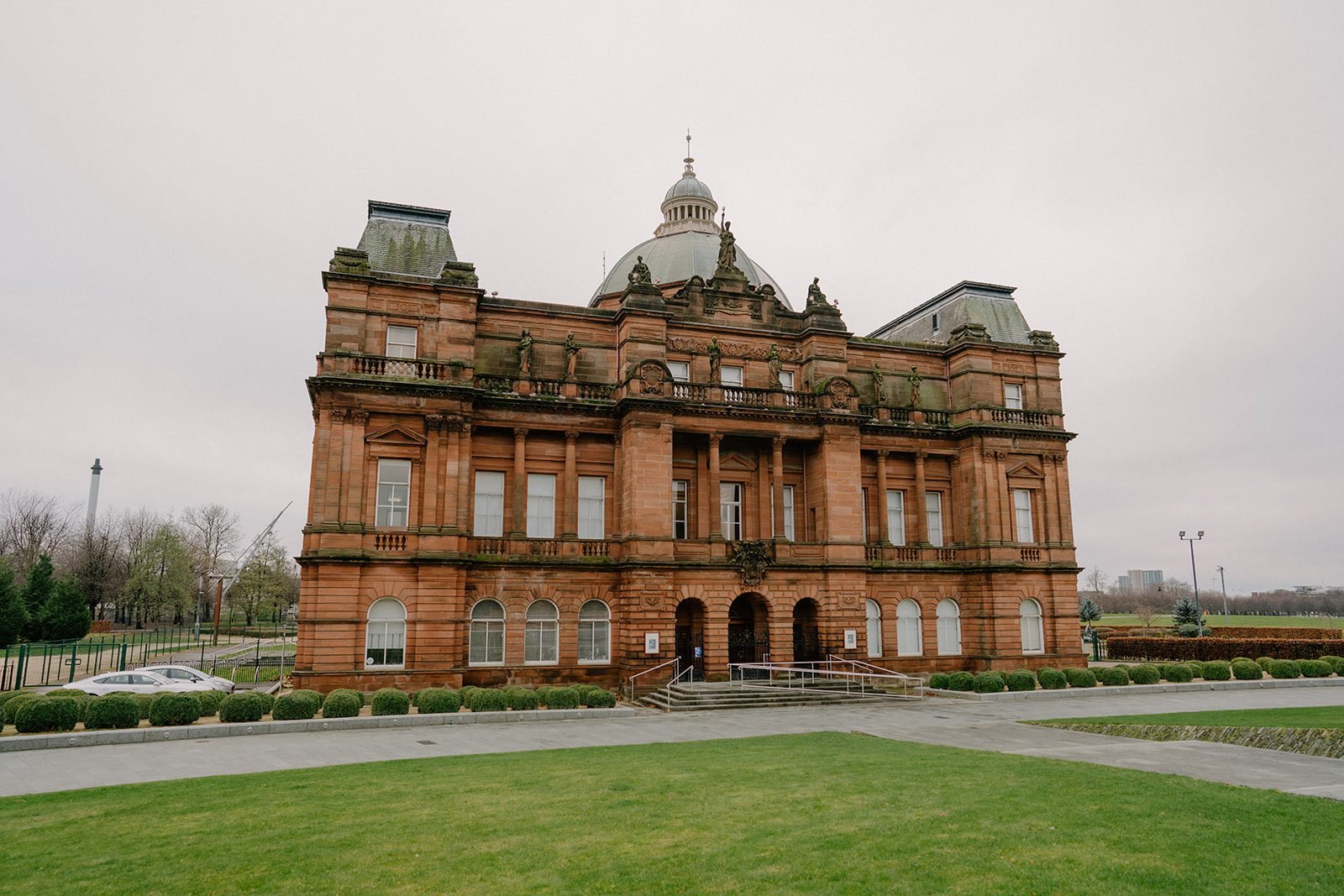