Urquhart Castle – The Guardian of the Great Glen

Urquhart Castle – The Guardian of the Great Glen

Loch Ness is one of Scotland’s best known attractions, but this is much more than just a place for monster hunters. Poking out into the water, on a rocky peninsula, lie the sprawling ruins of Urquhart Castle. These tumbled down walls are packed with stories of conflict going back over 1500 years.

Urquhart Castle guards the Great Glen, one of the few natural routes through the treacherous Highlands. This strategic location has been fortified since at least the 6th century when St Columba recorded visiting a powerful Pictish chief.

The foundation of the present castle wasn’t until the 13th century when King Alexander II realised that he needed somebody reliable to guard the Great Glen. Peace didn’t suit Urquhart Castle though and before long it was caught up in the Scottish Wars of Independence.

The fortress was passed back and forward as the Scots and English struggled for control of the country’s most important strongholds. In 1297, most of the English garrison was ambushed by Andrew de Moray on their way back from Inverness. Unfortunately for the Scots, the castle constable survived and rushed to bar the castle gates. Even a daring midnight raid on Urquhart’s formidable walls couldn’t dislodge him and without siege equipment, Moray was forced to give up.

Once the Wars of Independence were over, that didn’t mean that Urquhart Castle was safe. Loch Ness was still the easiest route across Scotland and rebellious MacDonald armies attacked the castle on a regular basis. The area was given to Clan Grant on the basis that they would restore order to the countryside and defend Urquhart against the King’s enemies. Things didn’t go too well for the new defenders. 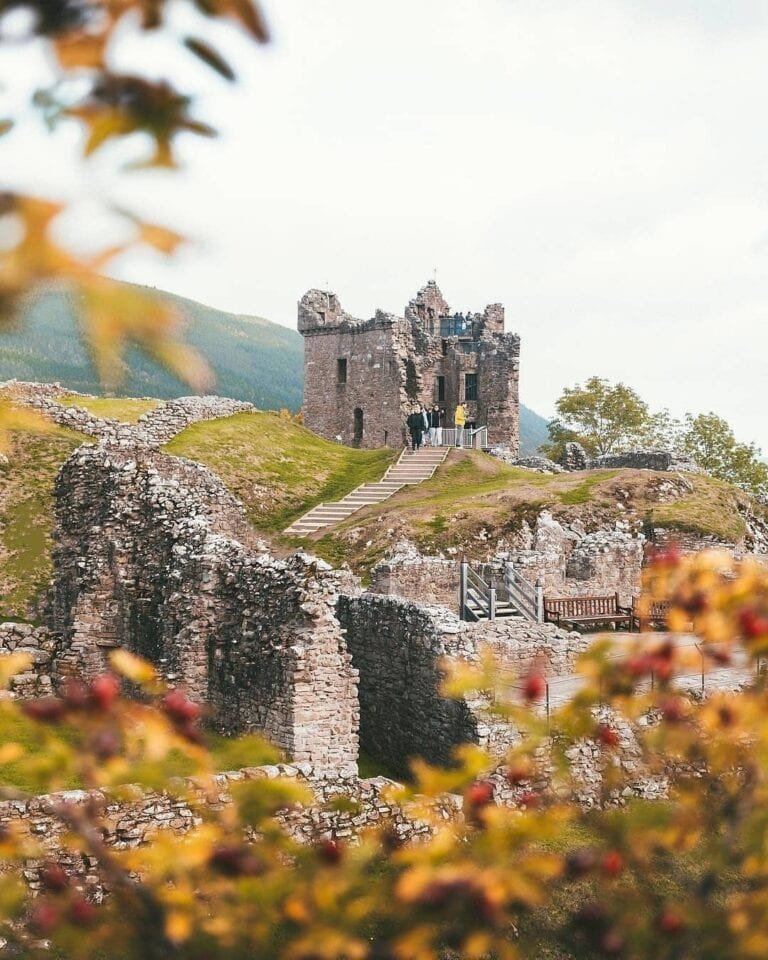 Just a few years after the royal appointment, the Grants had already lost the castle to the MacDonalds and it would take them 3 years to win it back. This constant fighting with the islanders culminated in The Great Raid where over 2000 cattle were lifted from the lands around Loch Ness. The name MacDonald became a very touchy subject with the chiefs of Clan Grant.

One man to suffer from that feud was a legendary Gaelic bard, Domhnall Donn. The unfortunate man was being held in the dark, dank prison deep behind the castle walls. Officially, Domhnall was being tried for trumped up charges of cattle theft but a local legend claims that he was held for a very different reason. This MacDonald warrior poet had fallen in love with the chief of Clan Grant’s daughter.

Domhnall knew the Grants were hunting for him but refused to abandon his love for good. He was discovered, hiding in the hills above Loch Ness and dragged to Urquhart Castle in chains. While the bard was imprisoned, he carried on composing heart wrenching songs romanticising his own life and capture. Maybe if the words reached sympathetic ears, then they would lead to his rescue.

Sadly, there was to be no romantic escape or fairytale ending for Domhnall. He may have suffered the short journey to the hangman’s noose, but his death earned him an eternal reputation as a local folk hero.