Words and photography by Shawna Law

Steeped in history and charm, Edinburgh’s city centre is generally at the top of every first-time visitor’s list of places to explore and as a result, it can get pretty crowded. Naturally, you may want a break from the crowds and the good news is that there are a variety of hidden gardens dotted around the city centre that once inside seem to magically shield you from the noise and bustle of the main streets. Here are a few to keep in mind when visiting the city:

Let’s begin with a small yet fascinating courtyard garden that provides a slice of welcome tranquillity in an otherwise busy corner of the city centre. The Archivist’s Garden was the brainchild of David R Mitchell, curator at the Royal Botanic Garden Edinburgh, who worked with Gross Max landscape architects to design the space. The team were inspired by the garden’s location which is sandwiched between the General Register House and New Register House. Both buildings file information in an ordered and logical way, whereas, Mitchell had a vision for the garden to acknowledge the different ways in which the human mind stores information with living memories being random and incomplete. Therefore, the garden is laid out in flowing patterns to suggest the randomness of memory and to replicate the shapes on the surface of the human brain. Furthermore, the 57 plant species chosen for the design were chosen due to their connection with Scotland. It was the hope that the garden would in some way reconnect visitors with Scotland’s traditions, customs and beliefs before they are lost. For instance, one section of the garden speaks of the plants that have a direct link with tartan through plant dyes and another tells of the tradition of planting an apple tree to celebrate the birth of a boy and a pear tree for a girl.

Overall, it’s a great place to enjoy a few moments of peace and quiet before catching a train or continuing with your plans for the rest of the day. 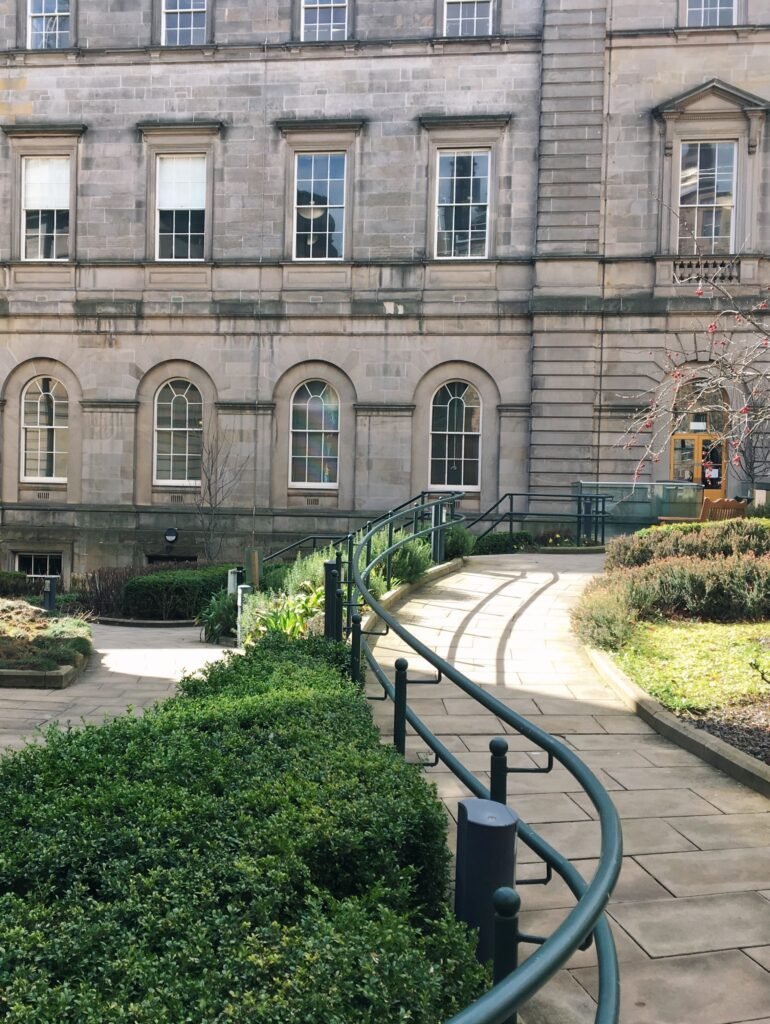 The Palace of Holyroodhouse’s physic garden is one of the newer additions to the city’s green spaces and also has links to the Royal Botanic Garden. Sitting at the foot of the Royal Mile, the garden can trace its roots to a small physic garden established in 1670 at the Palace of Holyroodhouse which went on to become the Royal Botanic Garden. The physic garden was opened in 2020 and consists of three distinct areas, each representing a phase in the Palace’s 900-year history. The first of these areas is a flowering meadow of medicinal plants which links to the 15th-century monastic gardens of Holyrood Abbey, once one of the grandest medieval abbeys in Scotland. The second section includes flowering bulbs, such as crocuses, tulips and alliums, that have been planted in a geometric pattern to reflect the design of 17th-century gardens. Lastly, the third area reimagines the physic garden that was established on the Palace grounds 350 years ago by doctors Sir Robert Sibbald and Sir Andrew Balfour, two founding members of the Royal College of Physicians of Edinburgh. It’s the perfect place to pause if you’ve spent the day exploring the Royal Mile.
Free & open most days from 9.30am-6pm 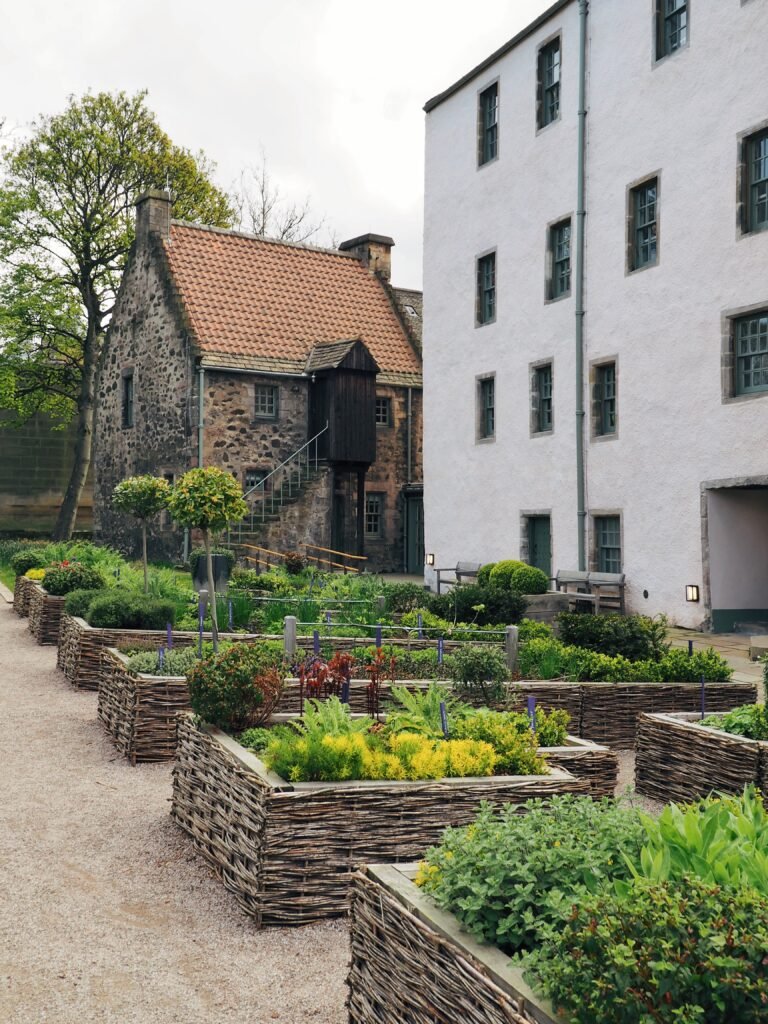 Speaking of the Royal Mile, our next garden is located on the Canongate. The Canongate was once filled with fine houses and spacious gardens so it’s lovely that a few of these green spaces remain and provide peaceful pockets along a generally busy street. One of the most well-loved of these green spaces is Dunbar’s Close Garden. It’s hard to imagine as you walk around the garden today that it was in such a state of decline in the 1960s that it was part of the slum clearance in Old Town. Thankfully, the garden was acquired by the Mushroom Trust in the 1970s, who hired landscape architect, Seamus Filor, to transform the space. Residents were then consulted and offered a choice between a historic or a modern design for the garden, with the idea of a 17th-century garden chosen as it felt more appropriate for the historic area.

As you enter Dunbar’s Close today, you’ll pass under a canopy of lush trees and emerge into an elegant garden divided into eight distinct sections consisting of several knot gardens, a patch of grass perfect for picnics, and wild gardens. Furthermore, the Burns Monument is visible from the garden which seems apt as Robert Burns was rumoured to have been a regular at Mrs Love’s oyster cellar, located near Dunbar’s Close, in the 18th-century. 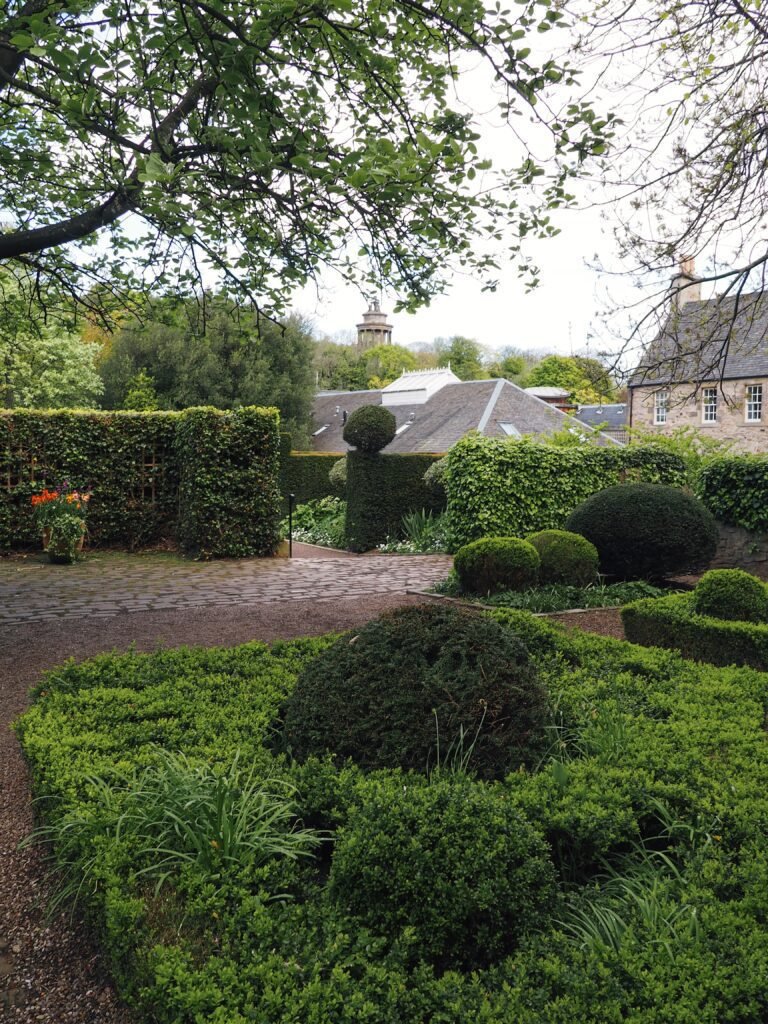 Another garden along the Canongate is Moray House Garden. One of the most interesting elements of this garden is its rich history. The garden, along with Moray House, was built in 1618 by Mary Sutton, Countess of Home. The garden was laid out in a French style with a succession of four terraces, connected by steps, which were home to the Queen Mary’s Thorn tree and a selection of fruit trees. The garden also consisted of a bowling green, a summer house, an ornamental pool and extensive orchards. With the backdrop of Arthur’s Seat and the Crags in the distance, it’s not hard to imagine why it was renowned for its beauty. Since then, the garden has been through several phases with Moray House being turned into a school which used part of the garden as a market garden. Then, from 1847 onwards, Moray House’s well-known garden gradually disappeared as the Training College expanded and the garden was used to build additional classrooms. Unfortunately, the original garden has not survived but in recent years, the College has renovated its quad, which was a car park, into a tranquil garden with plenty of benches where you can still enjoy the view of the Crags peeking above Moray House.

Free and open during office hours 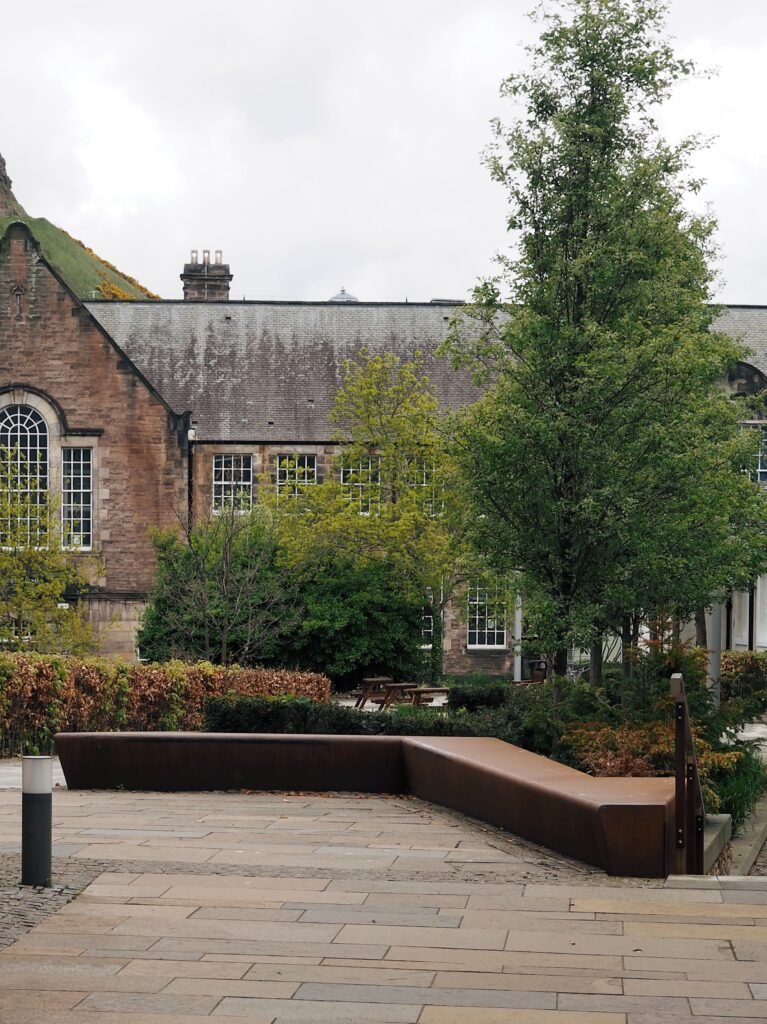 Located just a short distance from John Knox’s House on the Royal Mile, Sandeman House Garden is an award-winning garden that is owned by the Scottish Book Trust. The secluded garden is hidden behind the Scottish Storytelling Centre and is accessible through Trunks Close. As you enter, you’ll notice the main feature of the space, a large circular seating area with a lawn in the centre and greenery surrounding it. The large, leafy trees include several tall rowan trees with the jewel in its crown being a Handkerchief tree. The space is home to a charming cockerel sculpture and a bust of Sir Patrick Geddes, who is well-known for inventing town-planning as we know it. The garden was designed by landscape architects Turnbull Jeffrey who have managed to create a tranquil oasis that is truly unique. 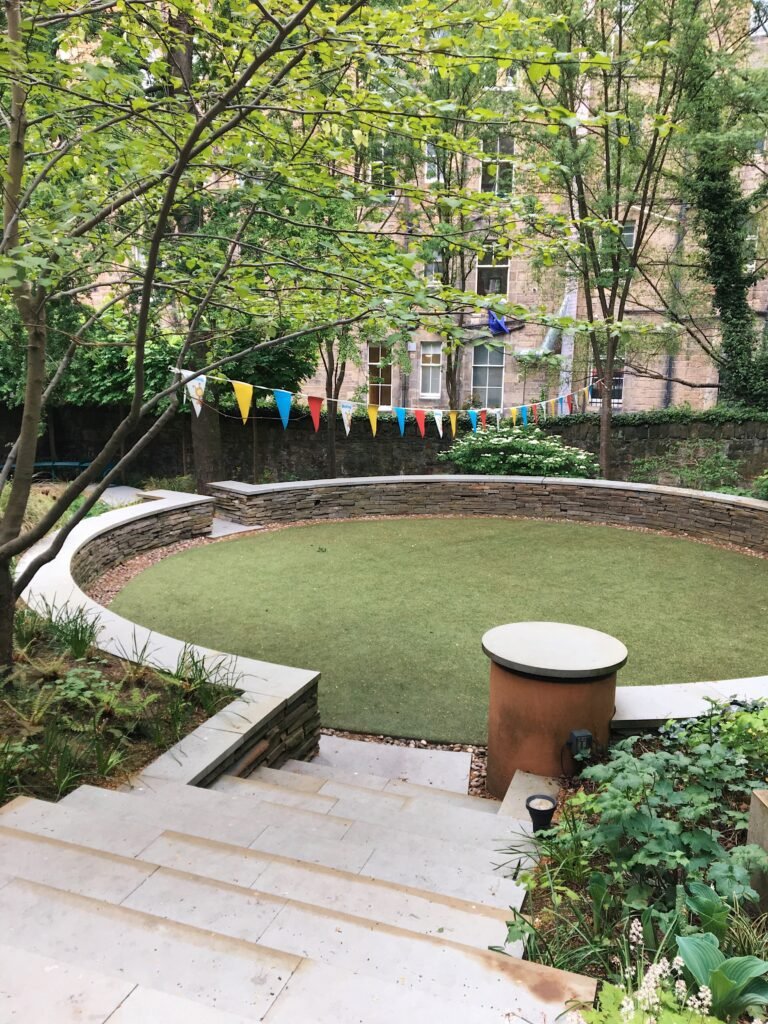 Nicolson Street is another one of Edinburgh’s busiest streets yet, if you know where to look, you’ll find a calm courtyard sitting just a few yards from the main road. Surgeons’ Hall Museums is part of the Royal College of Surgeons of Edinburgh and one of the oldest museums in Scotland with the collection growing significantly from 1699 onwards. In 1832, Surgeon’s Hall, designed by renowned Scottish architect William Playfair, was opened and housed the remarkable collections of surgeon and anatomists, Sir Charles Bell and John Barclay. The building was originally used as a medical teaching resource but is now open to the public.

As you approach the entrance to the museum, you’ll pass through a peaceful courtyard with cheery plants lining its paths and a striking statue by Denys Mitchell of a hand holding a scalpel as an ode to the skills of the surgeons who study at the College. There are a few benches dotted around the courtyard which make for a lovely spot to soak up a bit of sun and enjoy a moment of peace and quiet. 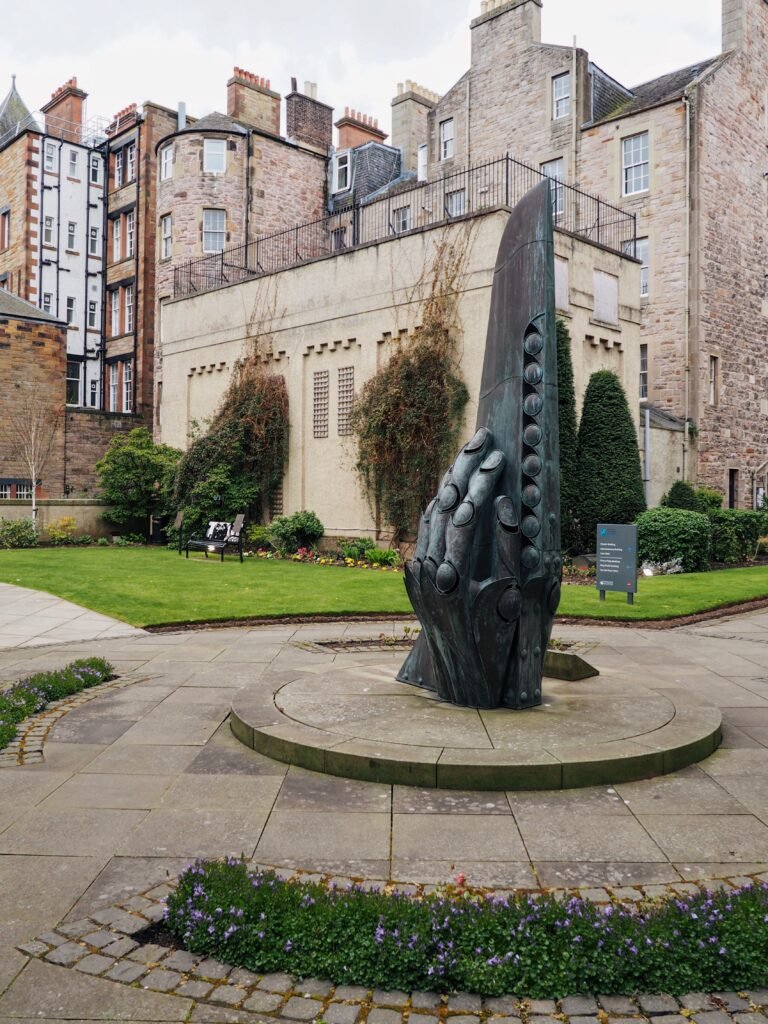