Connecting you with the people of Scotland by sharing their stories

Megan runs a jewellery and silversmithing business from her workshop at Deemouth Artist Studios in Torry, Aberdeen.

Hi Megan, can you please introduce yourself and what you do to our readers?

Hi everyone! I’m Megan and I run a jewellery and silversmithing business from my workshop at Deemouth Artist Studios in Torry. As you will see from some of the images, my work is heavily inspired by nature, specifically the Scottish landscape and coastlines. Most of my designs start off by using found objects from the beach and I develop the designs from there.

Alongside making collections of silver and gold jewellery that sell online and in craft stores around Scotland, I also do commissions for wedding/engagement rings, remodelling old/unworn jewellery and run jewellery making workshops. 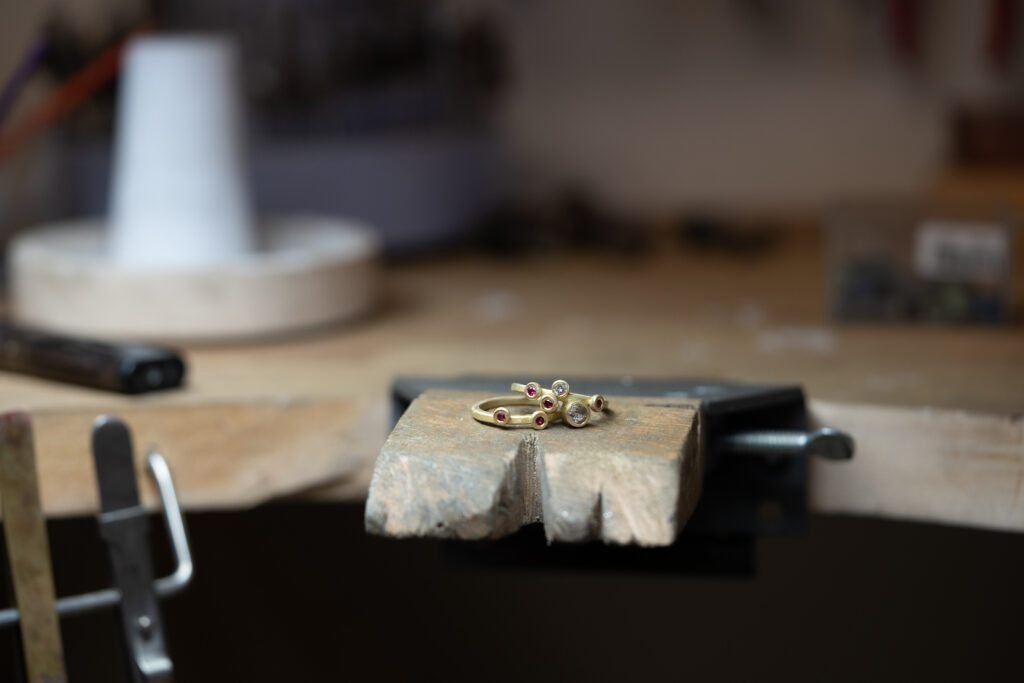 Take us back to the start — how did it all begin, and did you always want to be a jeweller and silversmith?

I usually say it began at Art School where I was first introduced to the Jewellery Workshop, but when I look back, I think I was always going to end up doing something creative and entrepreneurial. I remember at High School I would use my sister’s old/broken costume jewellery and repurpose it into different accessories I would then sell (or try to sell) to my friends in class.

I was always interested in making things with my hands, and I think when I saw the jewellery workshop at DJCAD in my first year of Art School I realized I wanted to go down the path of making jewellery, working with precious metals, and getting to use all of the fascinating tools. The idea of me being able to create something from nothing, or from these basic raw materials seemed so satisfying.

You have a unique approach to your jewellery making, can you tell us about this?

The technique I’ve been using since graduating really just started as I wanted to be able to make surfaces/patterns on silver that were completely unique. The process was developed during my final year when I was studying rocks and their properties, forms and structure. At first I was casting the rocks directly to try to make pieces of jewellery, but after some time being a little unsatisfied with the aesthetic of it, I started using the rocks directly onto the metal. To begin with, I would just hammer the metal with rocks, but as some were soft sandstone I found them breaking/crumbling so needed a solution to get the beautiful texture they gave but in a more substantial way.

The idea of turning the rock into a hammer then grew from there, and I experimented with different materials until I found a love of bronze due to its soft properties. The idea that the cast rock would change over time, as I used it, much like a rock on the beach alters due to erosion really resonated with me. 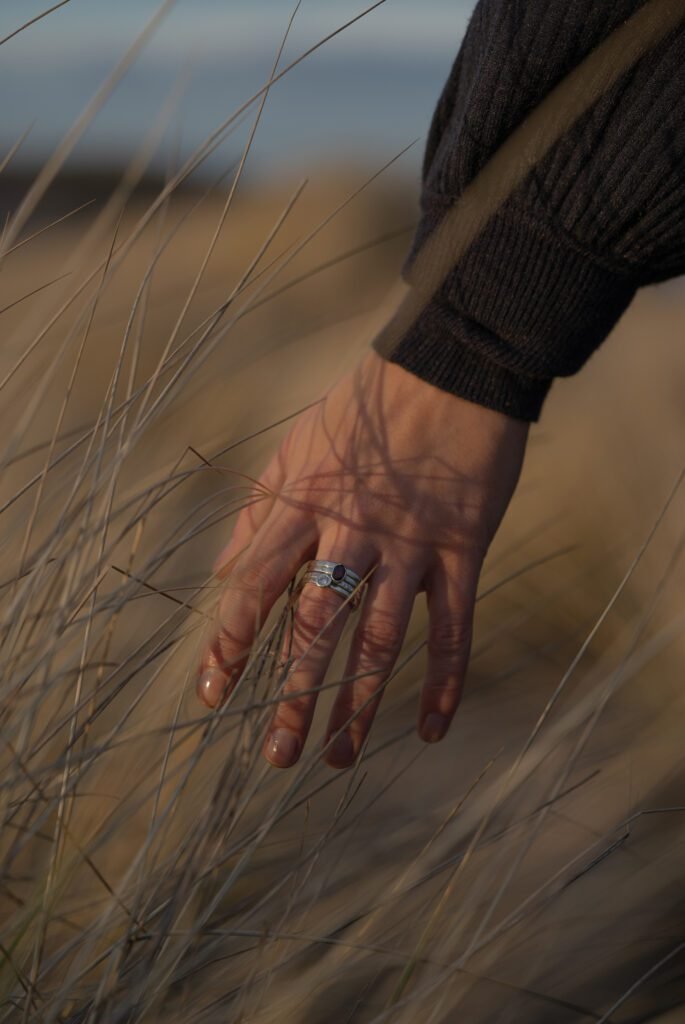 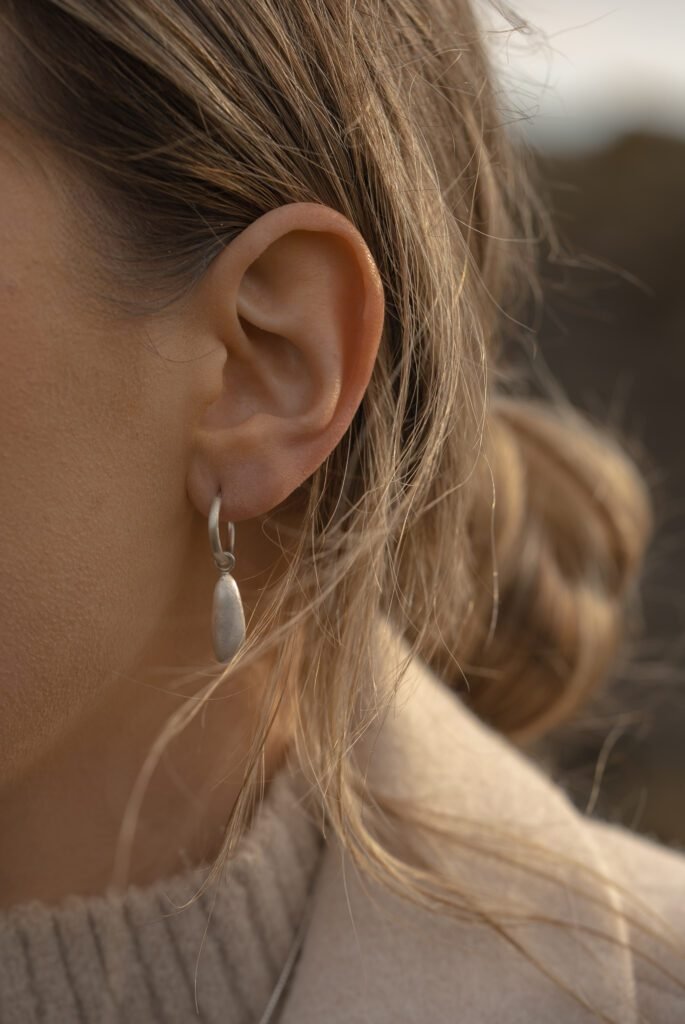 What was it that drew you to this method?

I loved the idea of making my own tools that would give this completely one off texture to apply to silver. And as I use it the tool and the texture changes, I loved the story that it told and that I could never then create two pieces the exact same.

What range of jewellery do you offer and what is your favourite thing to make?

My jewellery ranges from earrings, bangle, rings with gemstones, wedding jewellery and everything in between. One of my main aims when designing jewellery is to make something that I want people to enjoy wearing everyday, not something that would sit in a drawer and only be worn once a year. I enjoy making jewellery that become part of people’s lives and reminds them of a person, time or a place that is special to them.

Favourite thing to make is a hard one, as I really do love making everything I create. If I had to choose though, it would probably be rings. I think they’re a little more special as they’re seen much more often by the wearer, and there are so many different types of rings to choose from. I love mixing textures and colours into rings and I think everyone can choose a ring that fits their own style, whether it be delicate and simple or statement and bold with mixed metals/gemstones. 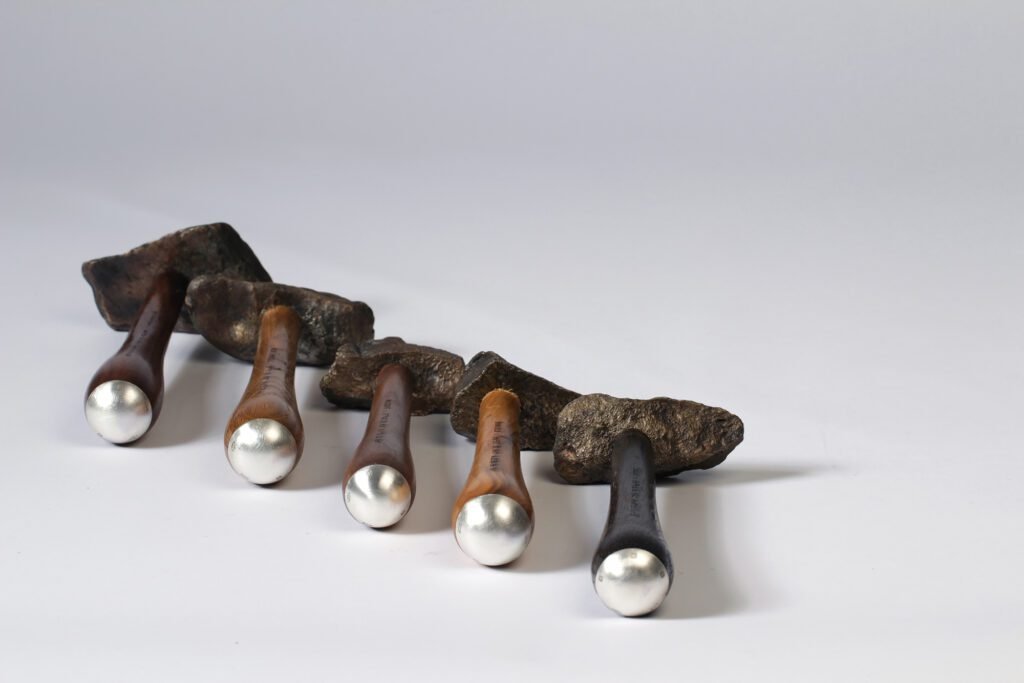 Can you talk us through how you find inspiration?

Finding inspiration for me always starts by visiting new places and taking photographs, looking at small details and often doing quick sketches of shapes/forms that I see. More often than not, I will revisit locations that I’m really drawn to and as I always find new interesting things to capture by revisiting them. A lot of my work is process lead, meaning I don’t usually sit and draw out exact designs before I make them. I work a lot better by creating samples and components and physically moving them around to see how the hammered textures can affect each piece. My mind works a lot better by visualizing things in 3D rather than flat sketches on a piece of paper.

Where in Scotland do you like to explore for rocks?

Living on the East coast means that most of my go to places are around this area – Newburgh, Stonehaven, Arbroath cliffs, St.Andrews, Banff etc. However after visiting the West Coast on several occasions over the last five years, I have slowly been collecting rocks from places like Islay, Skye, Clachtoll, Durness, Lochinver and will soon be launching a new collection using rocks from these areas.

You have a studio space based at Deemouth Artist Studios in Aberdeen, where you are surrounded by other local makers. What’s it like to be a part of this community, and who are your neighbours?

I’ve been at Deemouth Artist Studios now for almost two years and can probably say it’s been one of the best decisions for my business. As a creative I think you can sometimes feel like running your own business can be quite lonely as it’s often just you, however being part of this community makes it feel like you have a whole team of colleagues who are all so supportive and always there to encourage you and hype you up! I have some lovely neighbours, to name a few – Hackley, Fernweh UK, Val Thomson and Rowan Flint. 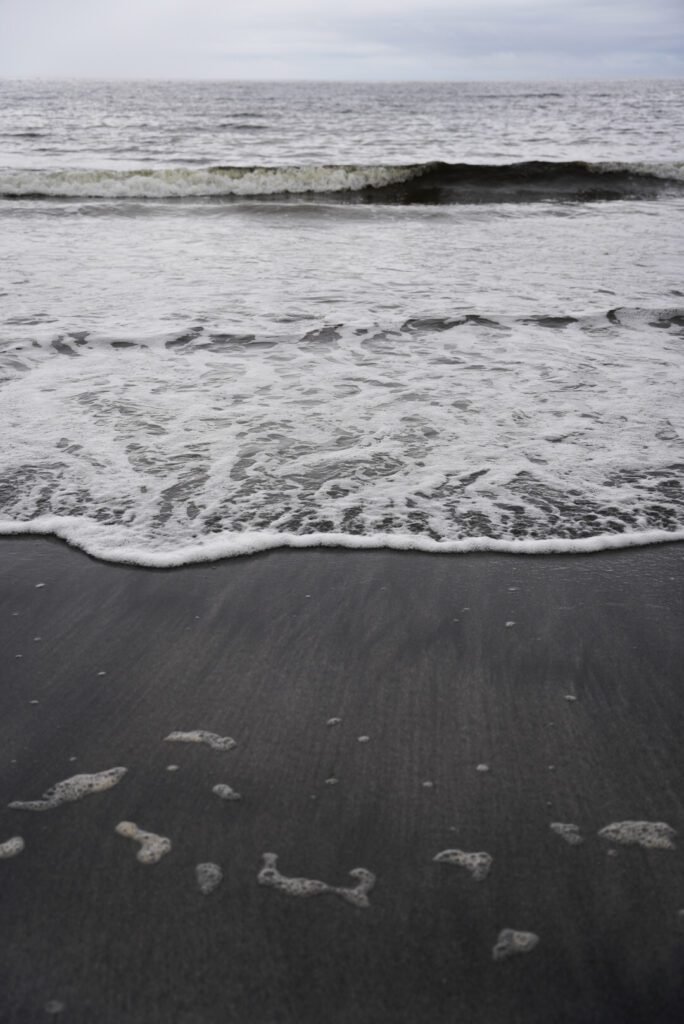 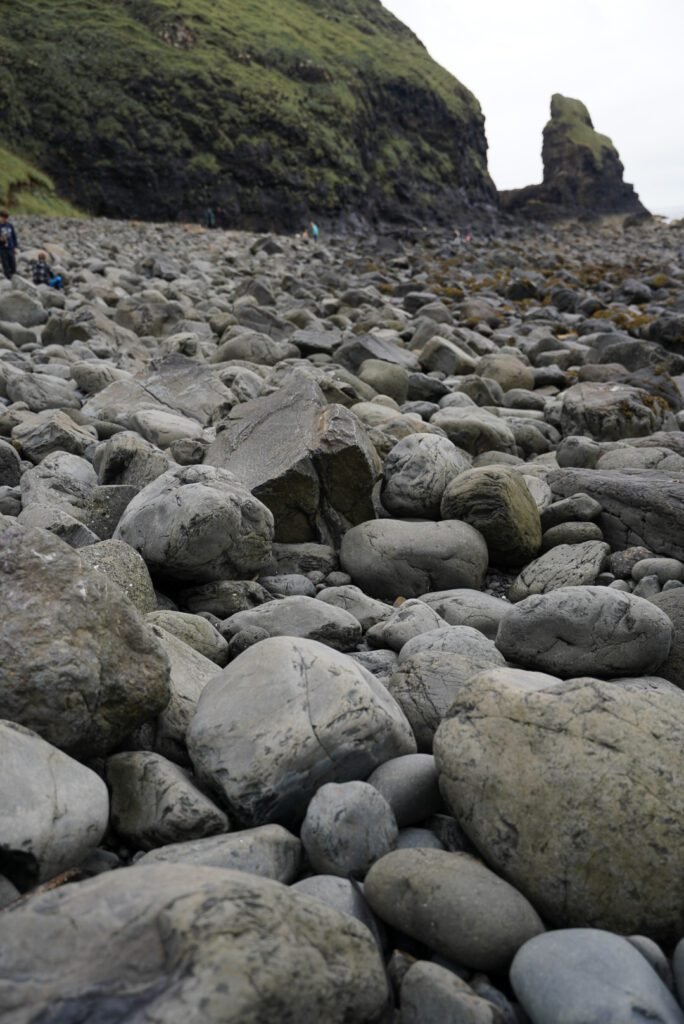 In your studio you also host workshops, what do you offer and what can someone expect from taking part in one of your workshops?

I offer a range of workshops from my studio, some just taster sessions for beginners (Make a Ring/Bangle), however I also offer more bespoke workshops for students/jewellery makers and Wedding Ring Workshops for couples too. For a Silver Ring making workshop, you will first come in and choose from my samples which style you want to make – whether it’s a chunky/wide band or slim and delicate. You then get the chance to try out lots of different hammered textures on copper before deciding and adding it to the silver wire. Once the wire has been textured, I then give a few demonstrations on forming/soldering/cleaning and polishing the ring before the students get to start. It’s a really fun workshop, where you get the chance to use lots of different tools. Everyone always leaves with a perfectly fitting ring handmade by themselves.

Can you share a few spots that you love to go in and around Aberdeen?

A few favourite spots I usually visit would be Newburgh/Forvie Sands, Balmedie Beach, Torry Battery, and Maisie’s favourite Countesswells Forest. On a nice day, I really like going to Aberdeen beach on route to the studio to see the beautiful colours and shadows over the sand and sea. I feel really lucky to live near the water and be able to go on beach walks everyday if I wanted to. 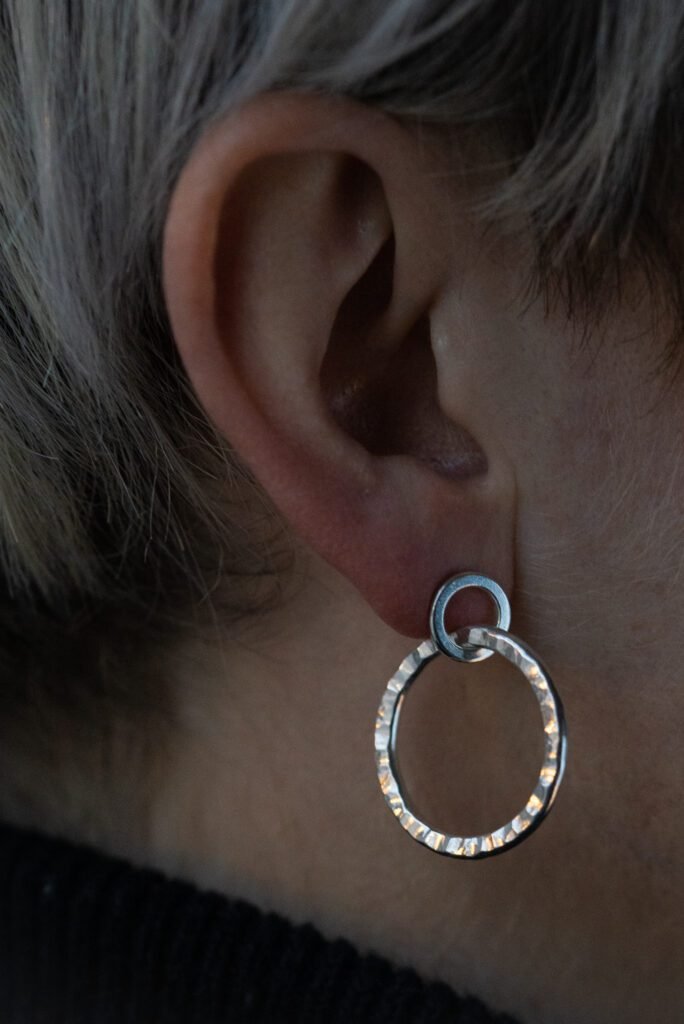 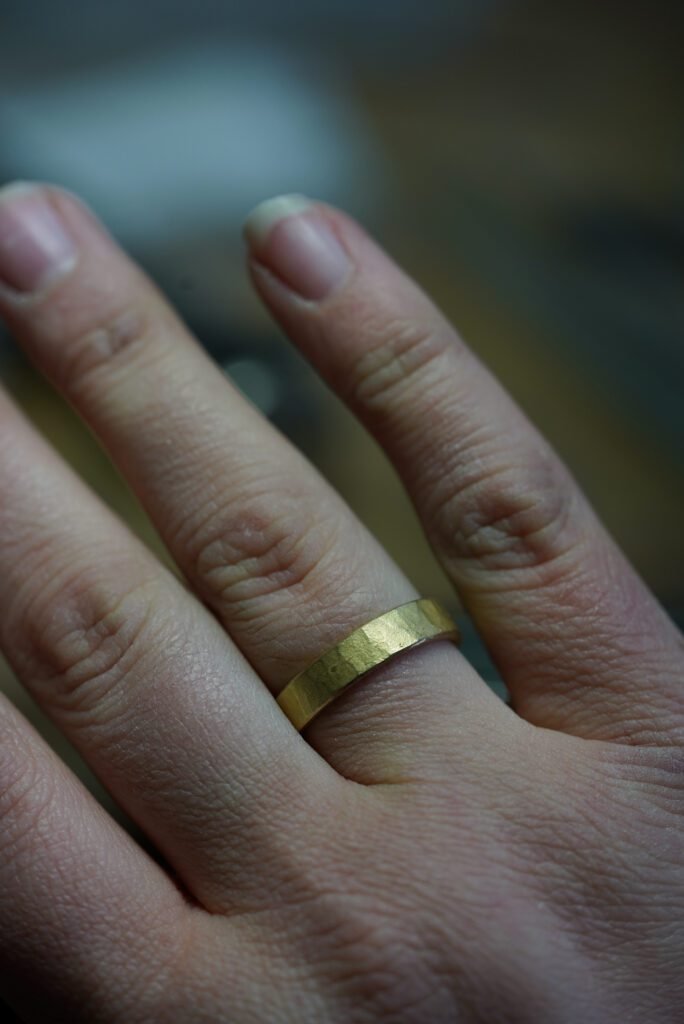 Can you pick out 4 or 5 things in your studio you can’t live without?

Oh if you saw my studio you would know that is such a hard question!

Although if I had to choose, I definitely couldn’t live without my rolling mill – it allows me to recycle silver/gold/platinum and probably one of my most used pieces of kit. I also, like many other jewellers have favourite files/pliers and hammers. I definitely couldn’t live without my original/first made hammer, the Dunkeld hammer. This was my first prototype I made and I have used it over the last 8 years and it has my all time favourite texture. It’s quite obvious if you look on my website as so many pieces from my collections are made with that hammer and come under the ‘Dunkeld’ collection. Also, maybe not a jewellery tool, but I also couldn’t live without my camera. I use it for all my images/videos online and I think it really helps having good quality images of what I make in comparison to using a phone.

What’s next for you?

That’s a big question, and also quite a hard one. It’s been a strange couple of years and I’ve only in the last 6 months took the plunge to be full time self employed. It was a big leap for me, but definitely the best decision I’ve ever made. This year I haven’t set out specific ‘goals’ I want to achieve but I do know I want to continue building my business. I am attending a few new events this year, and am trying to go a little out of my comfort zone. I’ll soon be taking on a new member of staff to help me with collections and commissions too. Early summer I hope to launch a collection that I’ve been planning for over three years so that is going to be a big thing for the business too.

I love running workshops and meeting new people, and would love to start passing on skills to the next generation of jewellers/silversmiths whether than be in an Art School setting or Post grad. I’ve got a few more session left of my Queen Elizabeth Scholarship Trust Training so once that is finished at the end of the year I hope to then apply for some big showcases/exhibitions in 2023.

One day the dream would be to have a beautiful studio with amazing views, a space much like the Hidden Scotland Shop, where I can work from/run classes, however at the moment I’m really happy being part of the studios in Torry.

Where can our readers find out more about you online?

Head to my website www.meganfalconer.com to find out more and shop my ranges of jewellery. You can also find out more about my workshops and remodelling/commissions processes there. 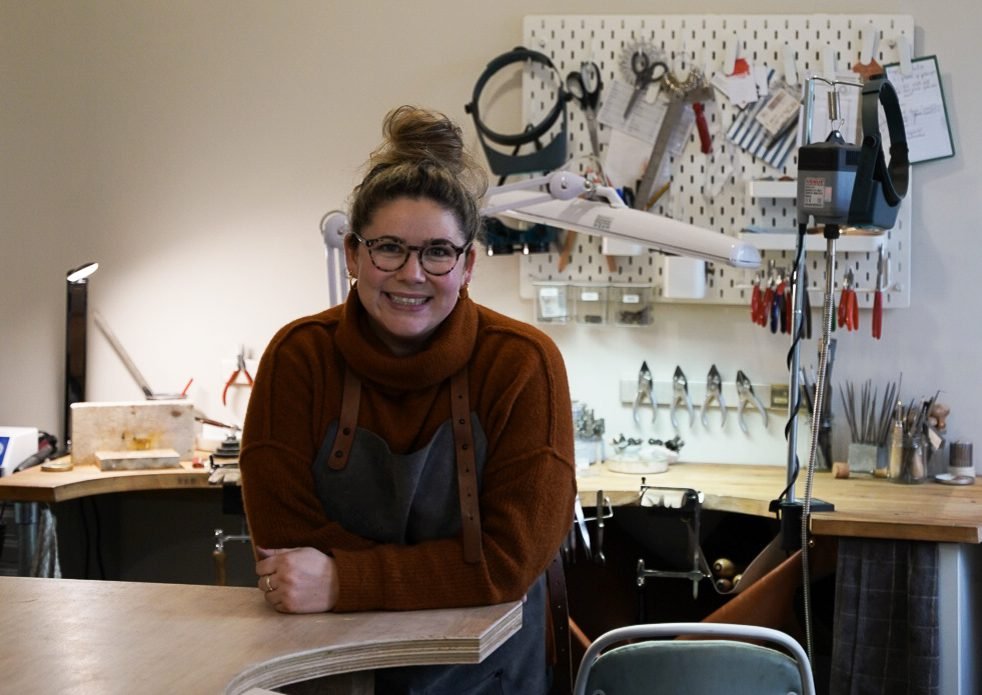