Legends From The Old Man of Storr

Legends From The Old Man of Storr

The Old Man of Storr is one of Skye’s most iconic landmarks and most popular hikes. It’s no surprise that more than one folk story has grown around this uniquely shaped pinnacle of rock. 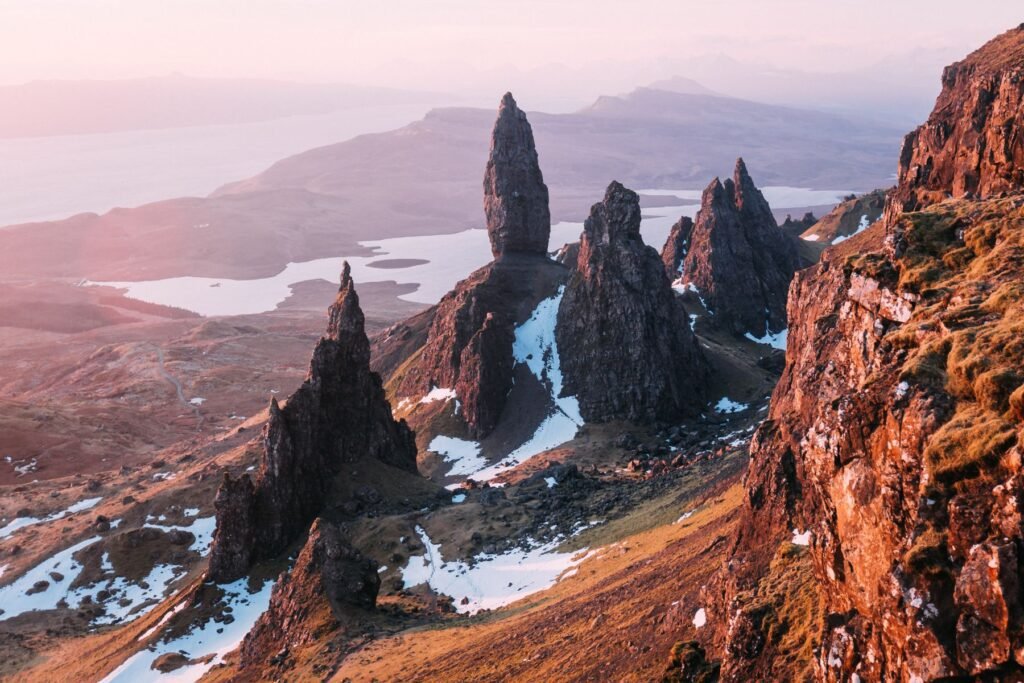 The most popular legend tells us that Skye was once a land of Giants. These enormous figures roamed the island from the Cuillins to the Quiraing, the sound of their constant fighting filling the air. During one of these regular battles, a particularly large giant was slain on the Trotternish Peninsula.

Abandoned where he fell, the land eventually swallowed up all but this one point, left poking above ground. Some say the Old Man of Storr was the giant’s thumb, while others know it as a slightly more intimate part of his body.

Another folk story attributes the landscape to Skye’s mischievous fairies. A local couple once climbed to the top of these hills every single day of their long and happy marriage. As the years passed and the couple grew older, the wife began to struggle with their daily hike.

Her husband refused to break the tradition and when she just couldn’t climb any longer, he carried her on his back. It wasn’t long before the old man wasn’t strong enough anymore, but he still didn’t want to leave his love behind.

The fairies had taken an interest in the strange sight of the couple plodding up the hill daily. When they heard the man wish that his wife was able to go everywhere that he went, they decided to pay him a visit. The fairies agreed to grant his request, all he had to do was carry his partner up the hill one more time on his back.

Once they had reached the top, the devious creatures turned the couple into this huge stone pillar. As promised, the husband would no longer go anywhere without his wife, joined together forever.

The last story relates to a much friendlier creature from Skye. A farmer who lived at the foot of the slope had once saved the life of a kind and honourable Brownie. These small creatures were well sought after, usually helping with chores around the house at night. This farmer didn’t want free labour though and instead, the two became close friends.

Years later, the farmer’s wife fell ill and tragically passed away. With a broken heart, the farmer died the very next day leaving the brownie all alone. Devastated at the loss, he decided to honour his friend in a lasting memorial. The brownie carved a rock above their home into the shape of his good friend, creating the Old Man of Storr.

The appearance of this landmark has changed greatly since these stories were first told. So much of the pillar’s rockface has crumbled away that it takes a good imagination to see the shapes that made the legends. Not as many people believe in giants, fairies or brownies anymore, but you can’t deny that there’s something very special about the Old Man of Storr.