I’m Hamish Morrison, a photographer living on the Isle of Skye and I spend most of my time darting my way back and forth across the island trying to capture it at its best. Well… most of the time I am darting between the rain showers but that’s not the point, the island is part of Scotland after all, and anyway it hardly ever rains between the showers; at least I think is how the saying goes. I’ve been doing photography for just over a year now and am constantly honing and adapting the way in which I take images. The Isle of Skye was the biggest reason i picked up a camera, when you’re surrounded by these sorts of landscapes it’s hard to not be tempted to try and capture it.

THE ISLE OF SKYE

Moving onto the island itself – The Isle of Skye is situated just off the mainland of Scotland, which it is connected to by a bridge. This makes accessibility particularly easy, no ferries needed here. Unless of course you want to step back 30 years and make a more traditional and stylish entrance on to the island, in this case you will be glad to know you can take the ferry from Glenelg to Kylerhea, the last remaining manual turn table ferry in the Scotland. A slight detour off the beaten track but a belter of an experience nonetheless. The population of the island is around 10,000, making it likely that humans are outnumbered by sheep… seriously you’ll understand if you come, there’s a lot of them, like a lot a lot; however conflict seems to only arise when the latter decide that they like to populate the roads, not just the hills! 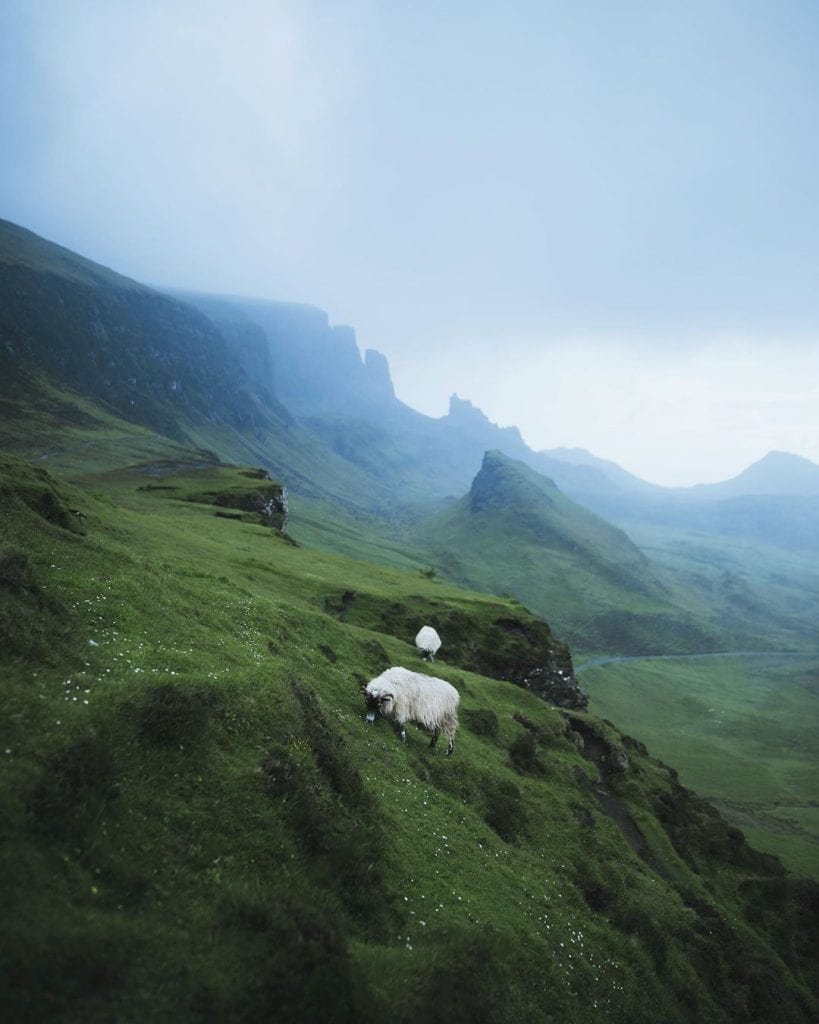 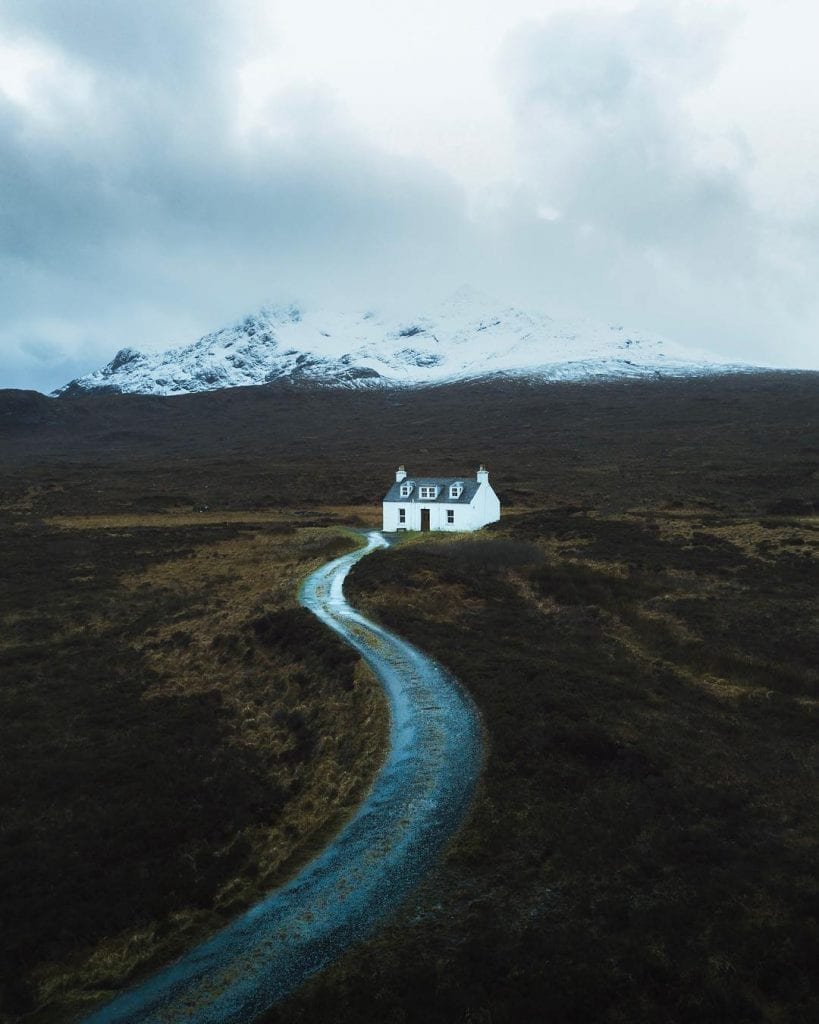 The island never ceases to take your breath away all year round. The weather is nothing to write home about but it’s not always bad! The main difference between summer and winter is the length of the days and that during the winter there are no midges! Oh and the island is at its quietist, so if you can brave the cold you will often find yourself alone in a place that during the summer is mobbed. Is it easy to tell that I’m a winter person? However during the off-season be aware that it is just that… the off-season, so expect to find some places closed and it may be harder to find accommodation. If in doubt just bring a tent and get stuck in! But of course just leave the place how you found it, the longer it stays like untouched wilderness the better!

Skye seems to be able to pack quite a punch by way of things to see, there are a few places in particular which seem to draw the most attention and it’s not difficult to see why!

We will start from the bottom and move to the top (that’s south to north, if we’re being technical). Starting with Elgol, a small fishing village with one of the best views into the south side of the Cuillin mountain range which is arguably the most epic mountain range in the UK. From here you can hop onto a boat ride which will take you into the heart of the Cuillins to Loch Coruisk, an inland fresh water loch, guarded impressively by the infamous Cuillin ridge. 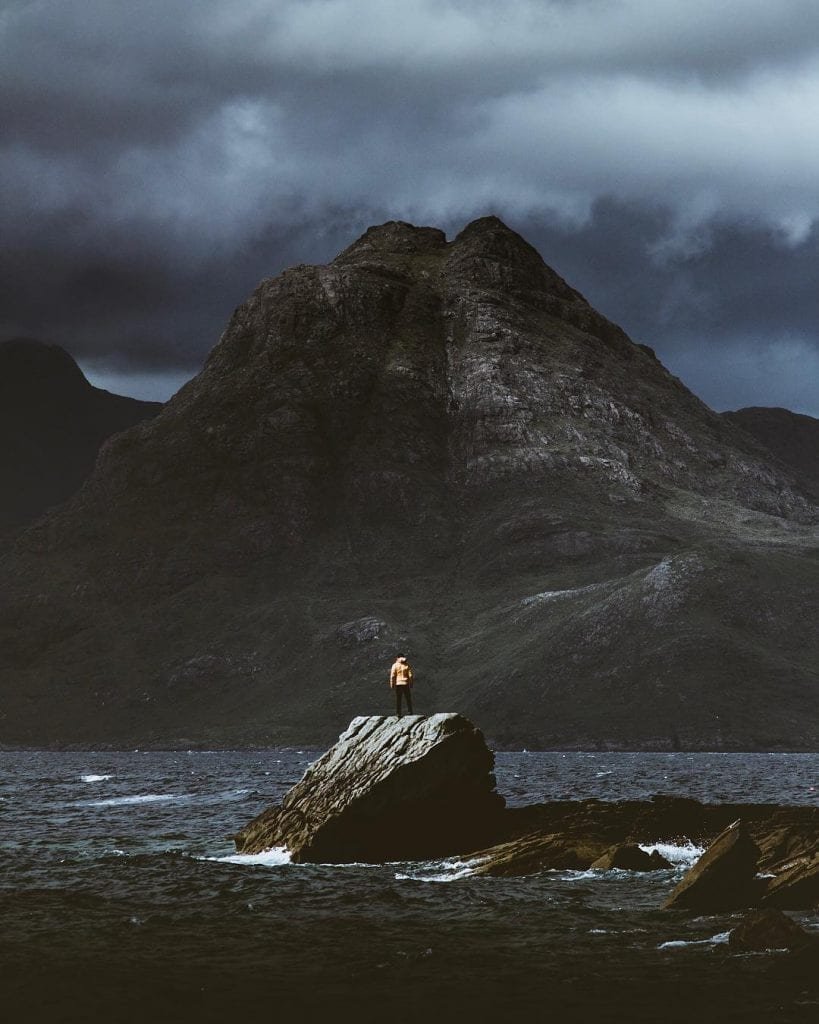 Farther north you can pay a visit to the ‘Fairy Pools’, a nice little walk to some crystal clear pools underneath an impressive Cuillin backdrop. If you’ve really got a taste for the cold you can take a dip and feel revived, or just cold, yeah probably just cold. Unless thats your thing probably just skip the swim. 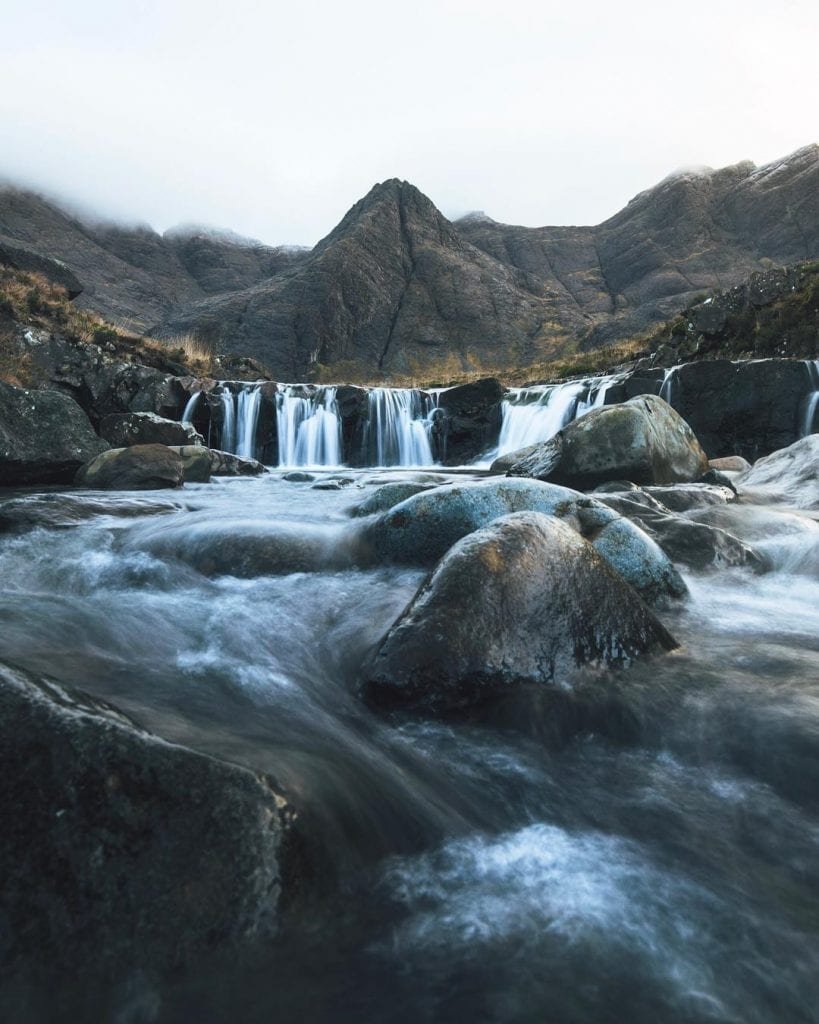 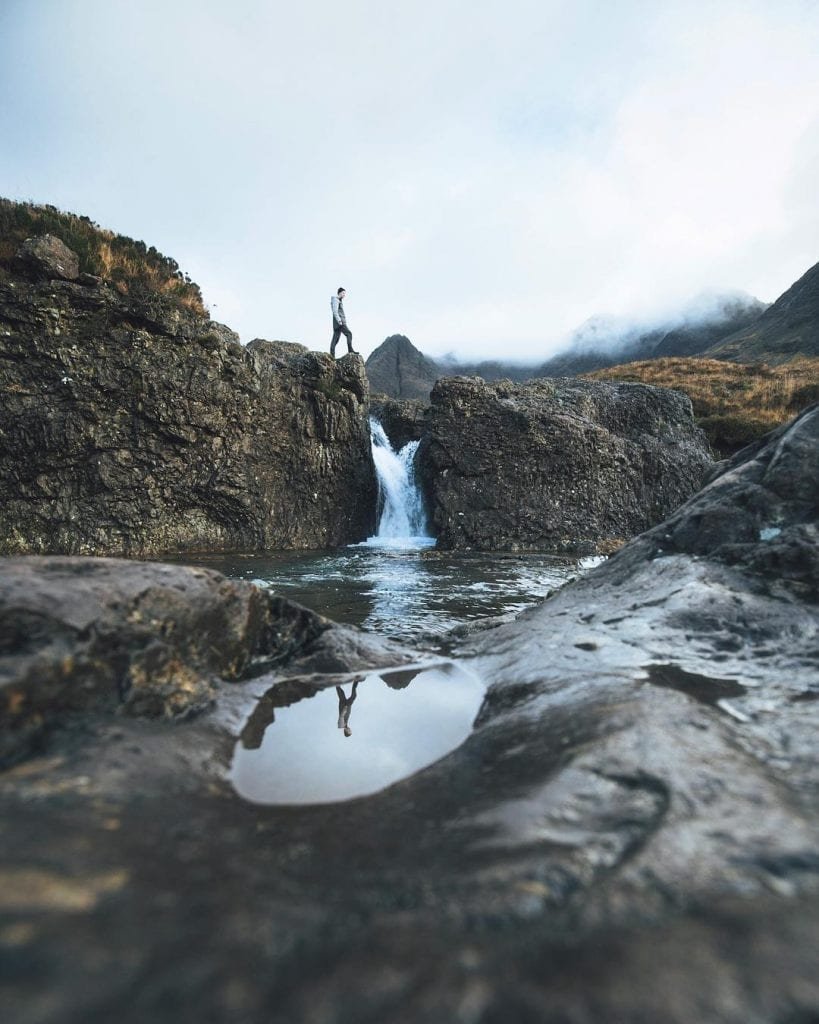 From here you can head north-west to ’Neist Point‘, this headland boasts an iconic lighthouse and a not to difficult walk to obtain one of the most insane views in Scotland (that term might crop up a lot, Skye seems to have a few of them). Best viewed at sunset, if you are blessed with such a rarity that is. The west face of the cliff over 100m high catches the last light of the day like nothing else and is an epic way to spend an evening. 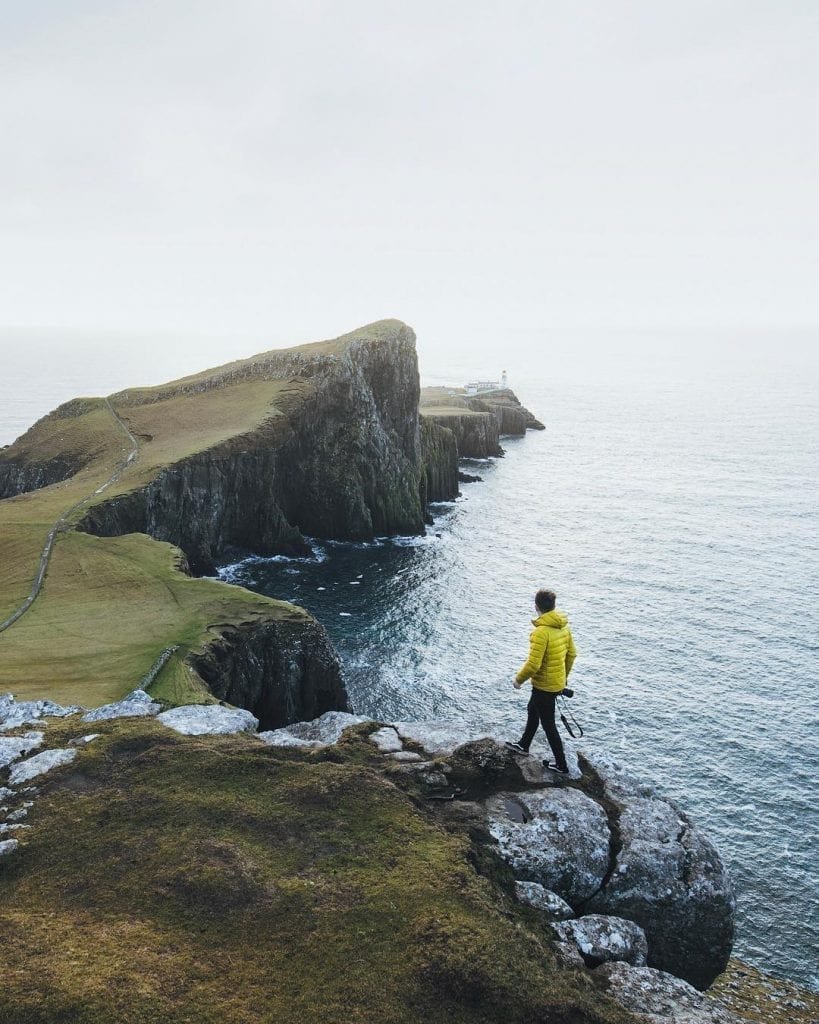 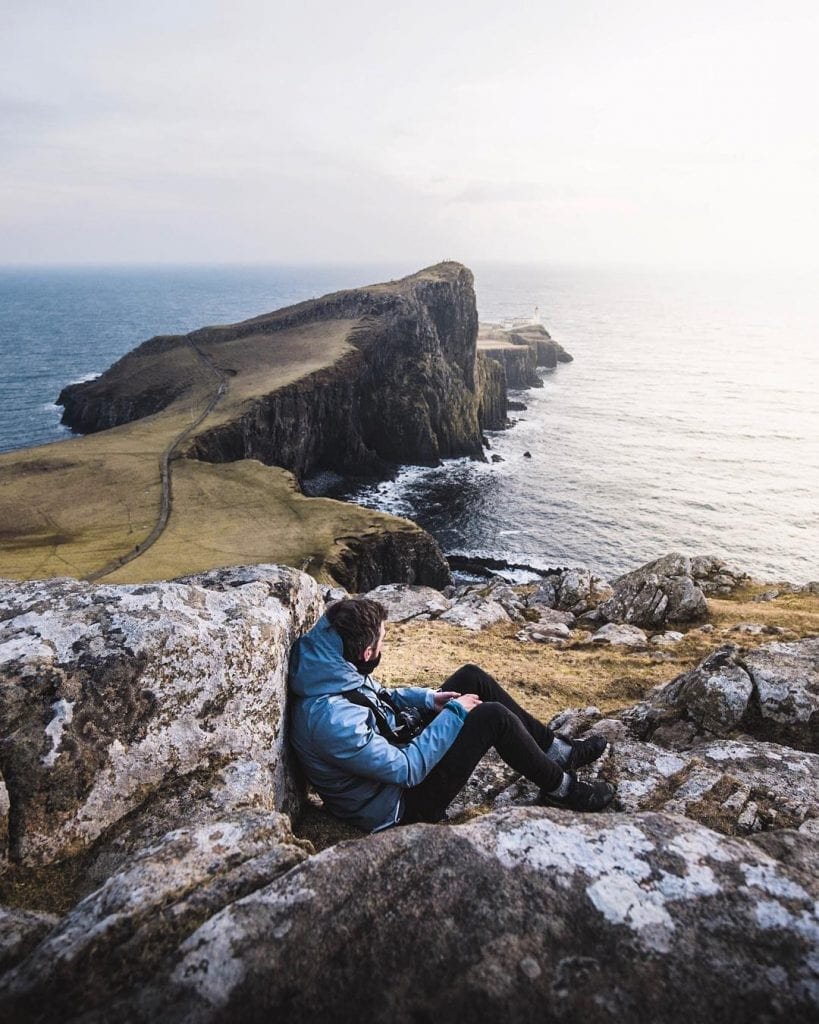 Next you may want to dart your way east to the infamous Trotternish peninsula – possibly the most beautiful end of the island – with some incredibly famous locations situated nearby to one another. The Trotternish ridge has developed its world class features due to a series of impressive landslips in which the land is still moving today. This leaves large pinnacles of rock jutting out of the ground, inviting tales of folklore such as ancient giants having been frozen… but hey, anything to make sense out of something so nonsensical.

To kick off the beginning of the Trotternish Ridge in some style is ‘The Old Man of Storr’. This is a fairly short yet steep walk from the carpark but extremely rewarding. You’re greeted with a view onto the Old Man himself along with multiple other Mordor like formations. On a clear day you can be treated to a perfect view of the Cuillin ridge some 50 miles away. Appearing in many a film over the years this is probably Skye’s most famous landmark, and it is not difficult to see why. Best viewed at sunrise due to its east facing position, but really it’s hard to go a miss at any time of the day.

From here you can continue north a few miles and find yourself at ‘The Quiraing’. A clearer representation of this landslip where the land has visibly slumped away from where it once stood. Walking along the easy and relatively flat path can place you under rocky outcrops with names such as ‘The Prison’ and ‘The Needle’. Furthermore, a quick yet sketchy scramble up the scree slope at the foot of the cliff can place you in the centre in what will seem like another planet (just use caution if you head up into the cliffs!). Passage ways through the rock lead you into huge, open topped, chamber like pockets in the cliff.

You will be able to work yourself up to the pièce de résistance, ‘The Table’. A flat plateau, roughly the size of a football pitch surrounded by the jagged cliffs (incidentally it can be used for football, but a bit tricky when the ball goes off the edge). It has been said to be the place of choice for locals to hide their livestock centuries ago in the event of an invasion. The Table is completely hidden from the land below, making it an ideal hiding spot. 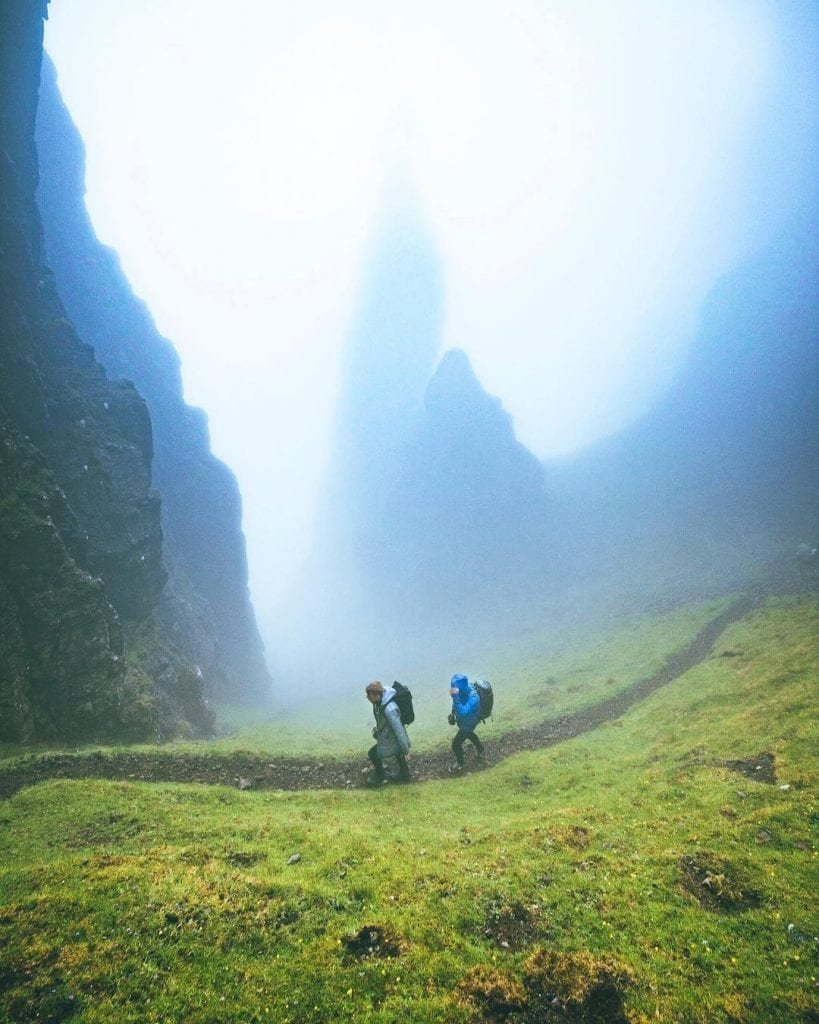 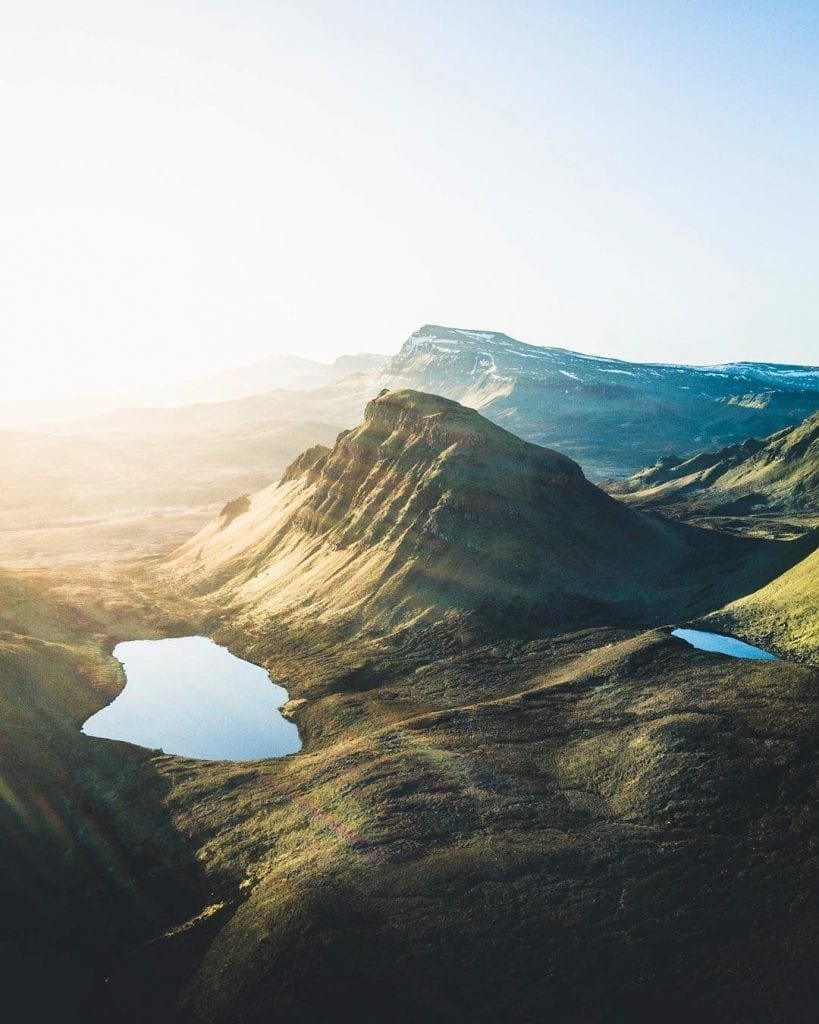 MORE OFF THE BEATEN TRACK

Places worth a mention slightly away from the hoards include ‘Lealt Falls’, a small waterfall falling into a bay that used to be home to Skye’s diatomite industry, that had ships taking the dynamite ingredient to as far away as South Africa. A steep descent but worth the short walk from the car park right next to the main road. Its nice to see a waterfall every now and then and this one does not disappoint.

Another more secret spot well worth the couple of kilometre long walk is to a small bothy perched on Skye’s most northerly cliff face. ‘Rubha Hunish’ is a gem, once an old coast guards lookout bothy it is able to sleep 3 if you want to brave the Skye weather with no central heating, but I guess it is at least one step up from a tent! It offers views straight to the outer isles and down on to the Rubha Hunish headland itself. Worth the walk but take at least half a day to do it, its worth exploring the coastline!

WHERE TO EAT IN SKYE

The best central location to base yourself is around Portree, the capital of the island and picture post card epic! It has the most shops and the most places to eat. However, there is a hefty amount of B&B’s and hotels dotted around the island in some pretty wild landscapes. So there really is somewhere to suit everyone. Be advised it is definitely advised to book in advance, places fill up very fast, seriously… book!! If not Scotland’s right to roam law gives you a pretty good reason to set up pitch just about anywhere you want. This makes camping a pretty inviting thing to do. If this is your type of thing, try camp close to a bar. Failing this, bring a suitably large bottle of whisky for company. You’ll need it!

That is the Isle of Skye in a nutshell, it’s difficult to go wrong with this island and i’ll challenge you to try and have a bad experience. Rain or shine this place doesn’t disappoint.

You can find me on instagram at @hamishmorrison and my website https://www.hamishcmorrison.com/ be sure to give me a quick follow, and keep up to date on the images I’m shooting around Skye and elsewhere!

Thanks for taking the time to read and hope this article can help on any future trips! 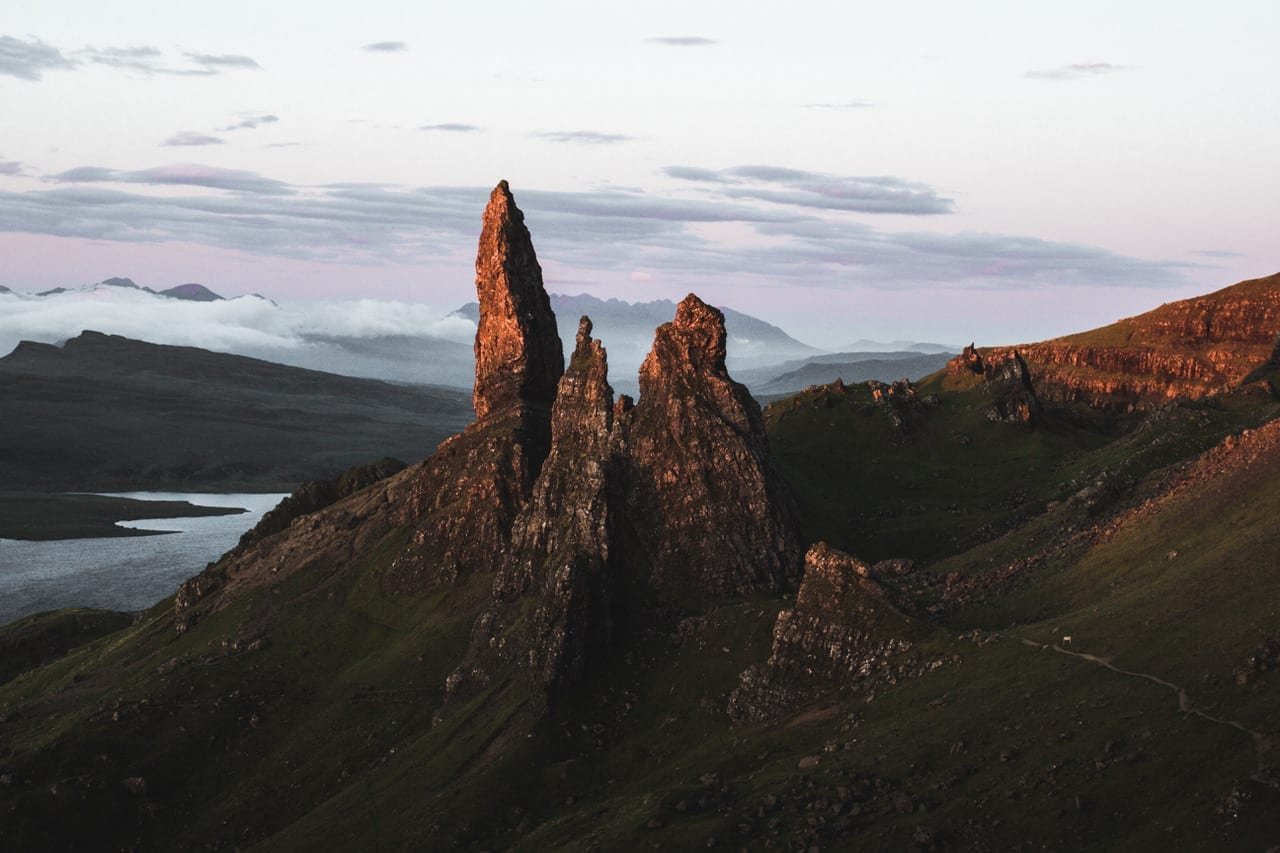