Kilmuir cemetery on the Isle of Skye is packed full of interesting gravestones, but there’s one that literally towers above the rest. An enormous Celtic cross dominates the area, marking the grave of Flora MacDonald and proclaiming her as the “Preserver of Prince Charles Edward Stuart.”

The story of Flora MacDonald and Bonnie Prince Charlie has gone down in history as a romantic, Scottish classic. When the fugitive prince arrived on the little Outer Hebridean island of Benbecula, it had been months since his defeat at the Battle of Culloden. He had been on a long, meandering road evading the government soldiers tasked with hunting him down but was beginning to run out of places to hide.

That was when the 24-year-old Flora became caught up in a plan that would make her a legend. She obtained a permit to leave the island and travel to Skye with two servants and six boatmen. Fearing that nobody would believe the slender prince was a boatman, he was disguised as an Irish maid instead, going by the name of Betty Burke. However unconvincing it may have been, the ruse initially worked and Charles successfully escaped to safety in France.

Unfortunately for Flora, the news that she had assisted the prince in his escape had spread and she was soon arrested, imprisoned in Dunstaffnage Castle and eventually dragged down to London for trial. The role that she played in taking Charles over the sea to Skye was forgiven just a year later with an official pardon. By then, the headstrong, island girl was renowned as a famous Jacobite. 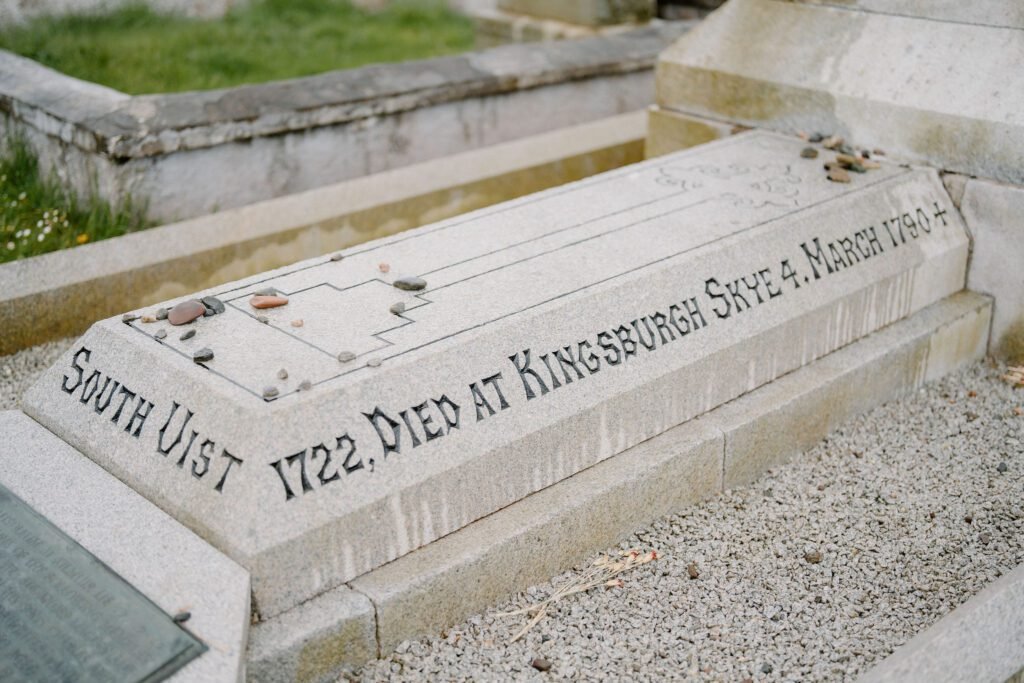 Flora MacDonald became the talk of high society, awash with coveted invites and even rubbing shoulders with royalty. She briefly emigrated to America but sadly lost everything during the War of Independence. When sailing back to the Hebrides to live with relatives, her ship was attacked by French pirates. It might be a tall tale, but the story goes that brave Flora refused to hide below deck with the other passengers and was wounded in the arm fighting the attackers off.

Flora’s fame continued throughout her life and she was a source of interest to many travelling throughout the Hebrides. When she died in 1790, it was a tragedy felt across all of Skye, with her funeral being the largest the island had ever seen. 3000 people attended and the party was so wild that 300 gallons of whisky were drunk in her memory.
The Jacobite connection followed her even in death, buried in a shroud made from a sheet that Bonnie Prince Charlie had slept in. The imposing cross marking Flora Macdonald’s grave today is a 19th-century replacement after trophy hunters are said to have destroyed the original by chipping off chunks as mementoes.

Influential author Samuel Johnson wrote that Flora MacDonald’s “name will be mentioned in history and if courage and fidelity be virtues, mentioned with honour.” Judging by how many people still pay their respects at her grave in Kilmuir, it seems as if he was right. 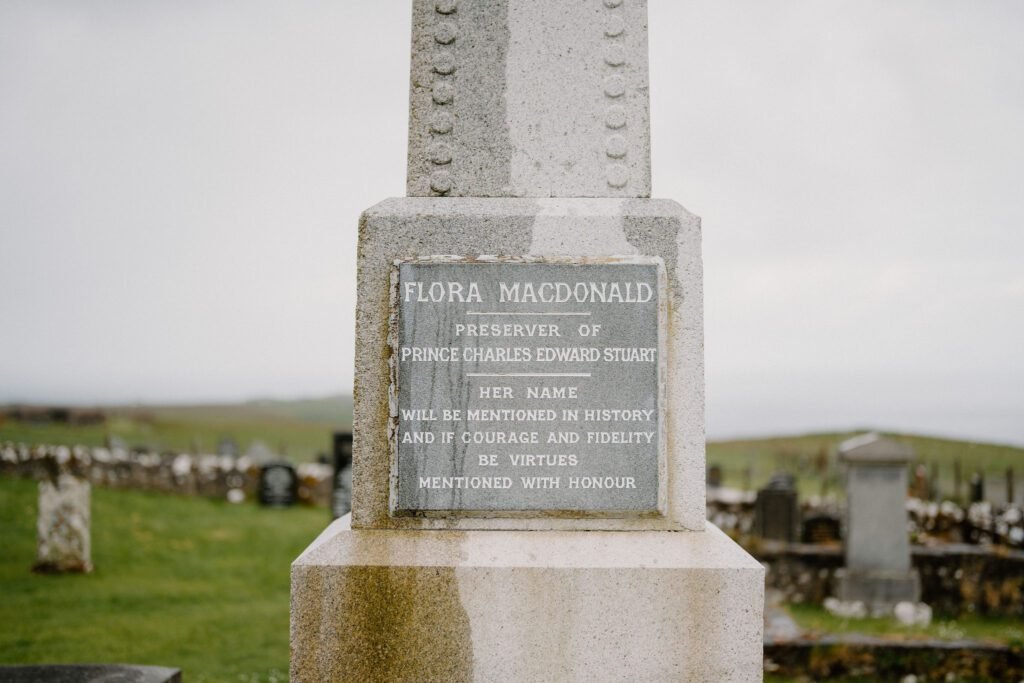 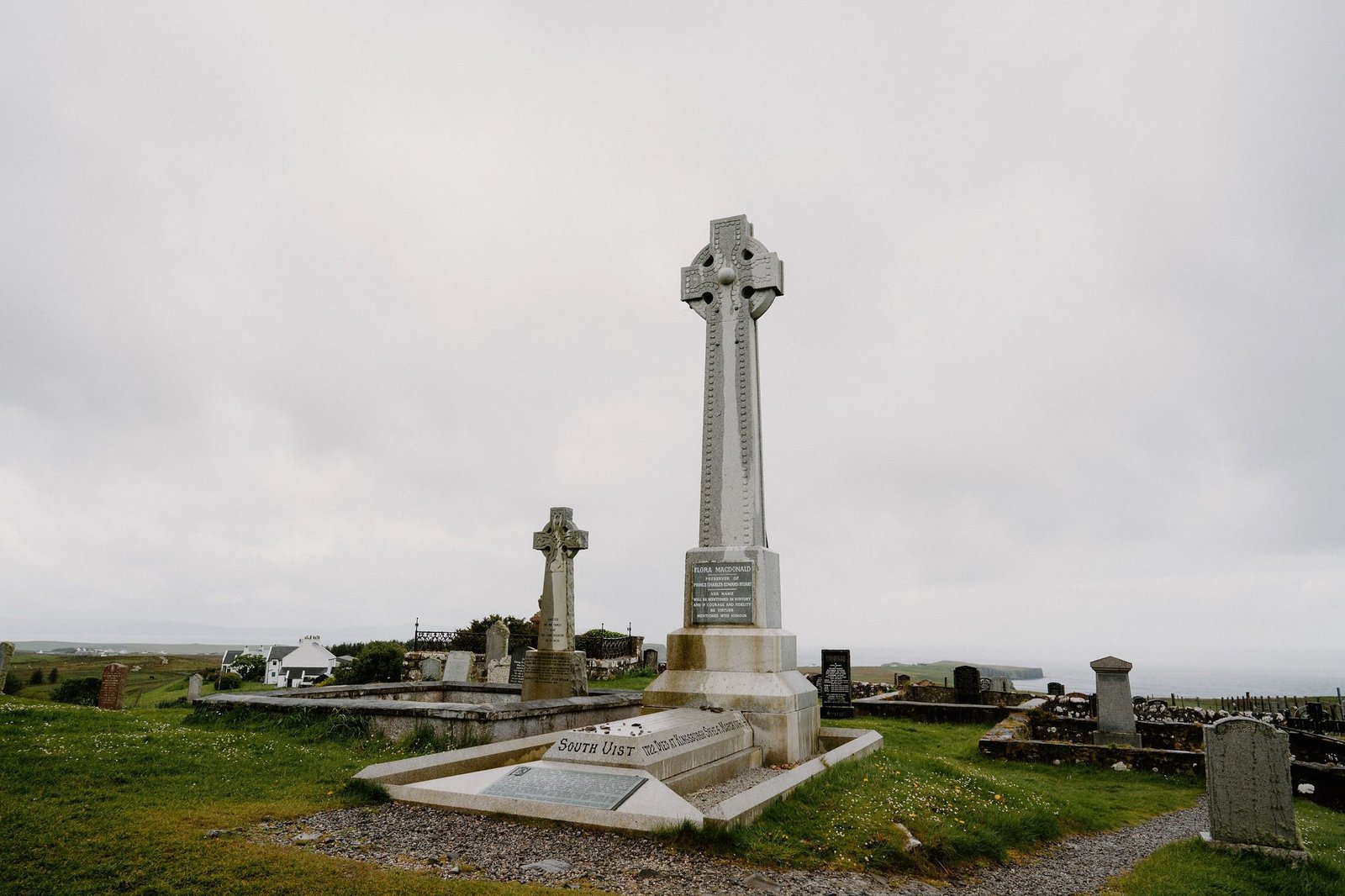