Words and photographs by Rachel Eunson

A true icon of the Orkney islands – The Old Man of Hoy rises defiantly from the churning blue waters of the Atlantic Ocean. The towering Red Sandstone monolith stands at a height of 137m, supported by a base of only around 30m width. A 60m chasm separates the stack from the West coast of the remote and ruggedly beautiful island of Hoy.

The Old Man is among the tallest sea stacks in the UK and certainly one of the most famous. It is relatively young in geological terms, estimated to have stood as a sea stack for less than 400 years. Interestingly, a sketch of the Old Man of Hoy by William Daniel from 1819 shows it as a wider column with an arch or two ‘legs’ at the base, which is perhaps where it got its name from. Later, at an un-recorded time, the Old Man lost its arch, leaving the stack as the single pillar we see today. 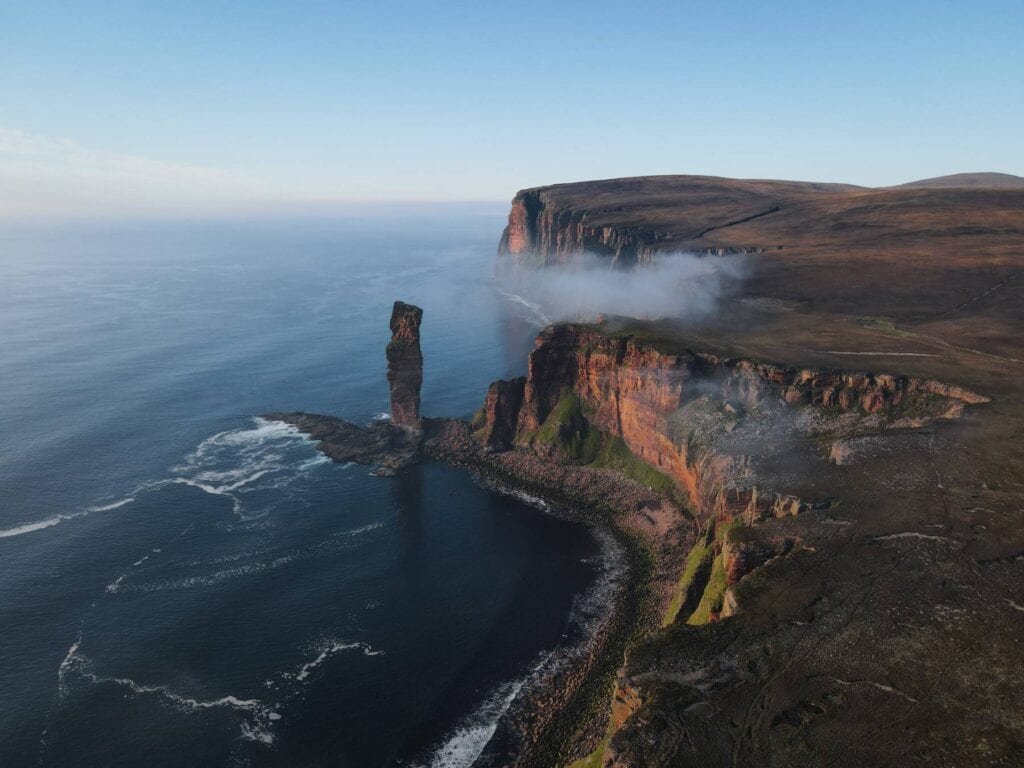 The imposing sea stack gained much of its fame from its popularity among climbers from all over the world. In 1966, leading mountaineers, Chris Bonington, Rusty Baillieand Tom Patey became the first recorded people to reach its peak. However, upon their return local people told the climbers a charming tall tale of an earlier ascent. A story passed down through generations told of an elderly but able-bodied pipe-smoker who climbed the stack for a bet. Upon reaching the base of the stack realised he had left his pipe on top of the Old Man. And so, he climbed it a second time.

In 1967 television history was made when the Old Man of Hoy was conquered by a team of six during a televised broadcast. This was regarded as the most ambitious outdoor broadcast of its time. Within the next few years, the Old Man was conqueredmany more times and Christine Crawshaw became the first woman to reach the summit. 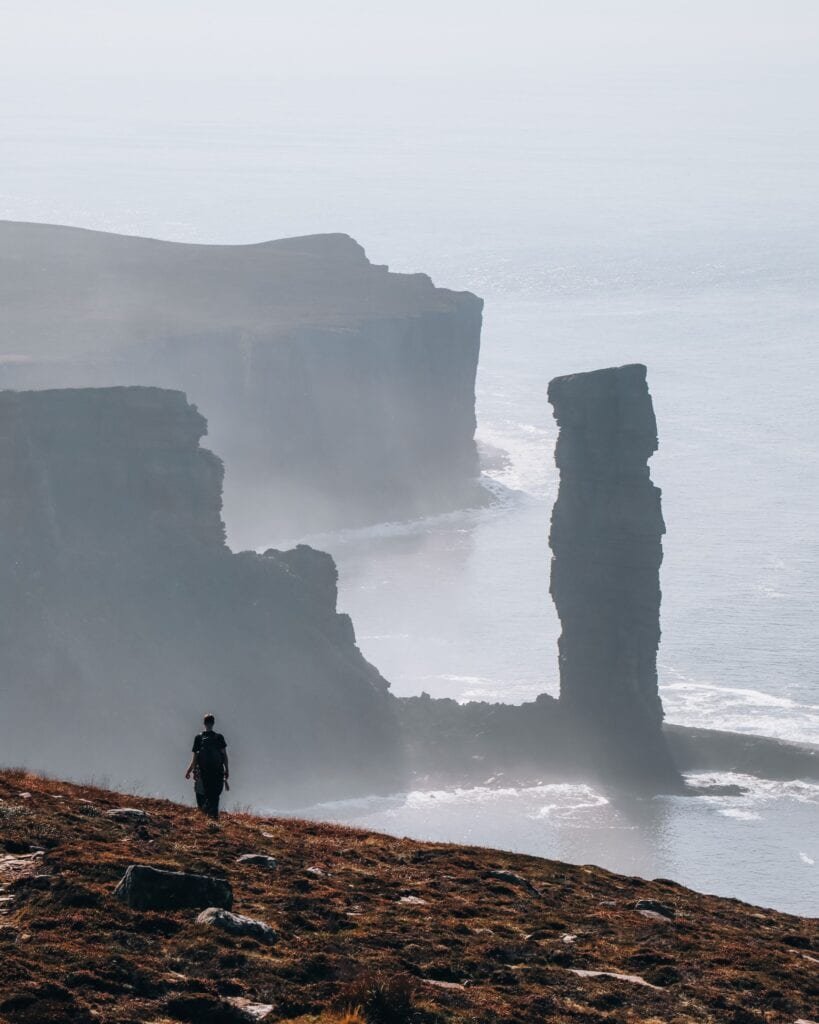 Other notable climbers in the following years include an ascent by seven-year-old Roy Clarkson who became the youngest to conquer the Stack, an ascent by a blind climber, Red Szell in 2013 and a daring BASE jump from the summit in 2008. The French climber Catherine Destivelle became the first woman to solo climb the stack in 1998 and gained the name ‘the Rock Queen’ for her efforts. Incredibly, Catherine was 4 months pregnant at the time of her climb and so carried with her possibly the youngest ever to reach the summit!

You don’t have to climb the Old Man to be amazed by this iconic landmark. The walkfrom Rackwick Bay to the stack alone is an extraordinary experience. From the Old man, you can enjoy some of the most breath-taking coastal scenery in Orkney, with views over to the striking Red Sandstone cliffs of St Johns head – the highest vertical cliffs in the UK.

Words and Photographs by Rachel Eunson

I’m Rachel, a photographer and certified drone pilot from the Orkney Islands. I have always had a fascination for capturing special moments and living in these remote islands has provided an amazing place to develop individual creativity. I feel very lucky to call Orkney home and it’s unique, rugged natural beauty continues to be a main source of inspiration for my work. 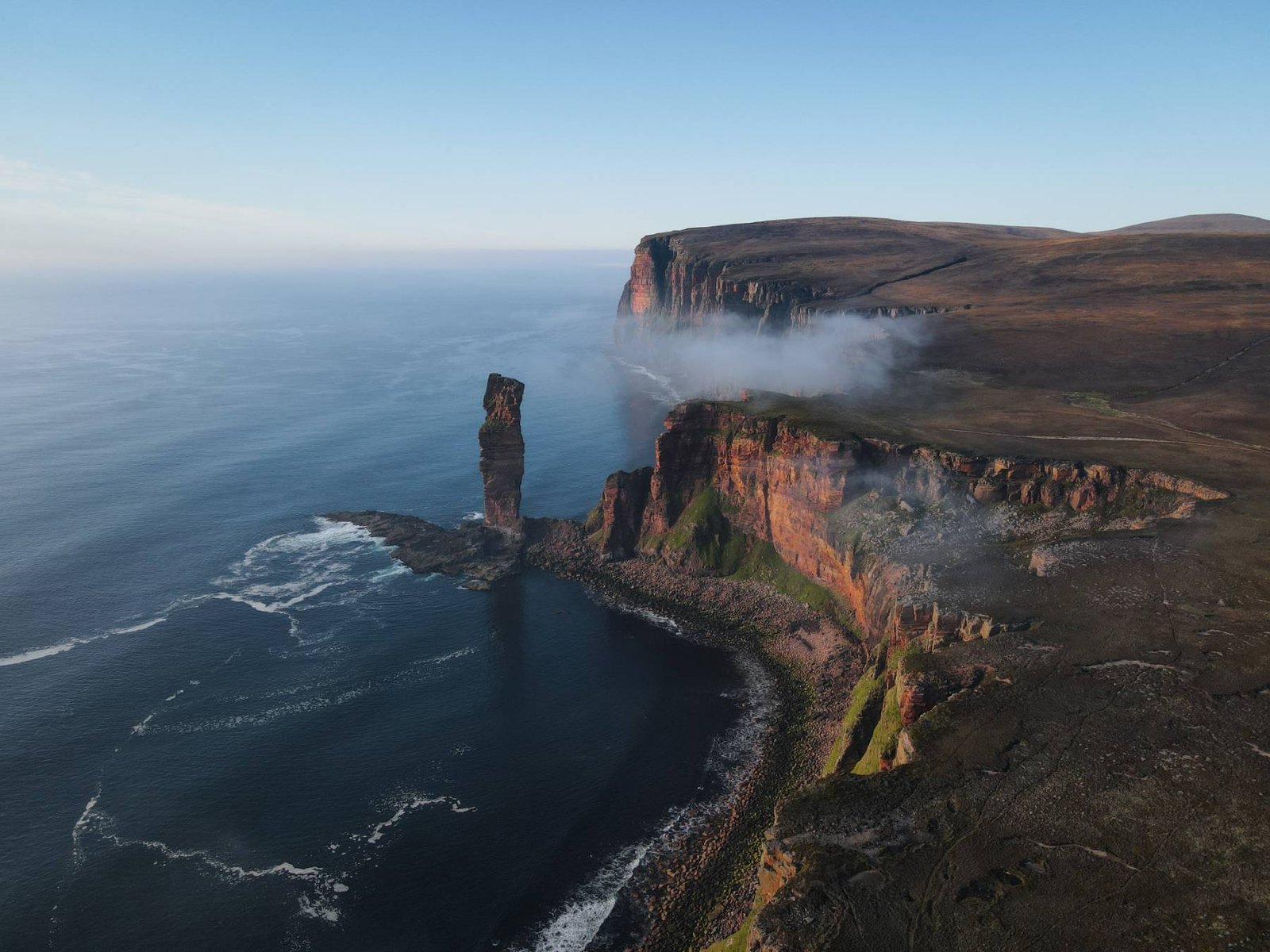