A fortified structure from the Middle Ages, there are thousands of castles across Scotland. Some you can still see in their resplendent glory, others are ruins, mere shadows of their past and others are lost. Some are the elegant notes left behind by barons and lords, whilst others have a dark, turbulent history for safeguarding cities from invaders. In themselves, the style of the castle gives you an idea of its age. Large, vast curtain walls, for example, were the trend of the 14th to 17th centuries. After this, ornate interior and exterior plasterwork was the must-have addition. No matter where you find the castle, whether it is a family seat or the left-over ramparts of royalty, it tells a story of a time long ago. Some are known from the parchment of historical records but others, like Edinburgh castle, we can examine in all its glory.

On the edge of the North Sea, just south of Stonehaven, stands the formidable fortress of Dunnottar Castle. Restored in 1925, the castle ruins sit atop a huge, rocky outcrop, surrounded almost entirely by steep cliffs that plummet to the waters below. A visit to Dunnottar is well worth the journey if only to watch the evening sun illuminate the castle’s jagged exterior. It’s a breath-taking view that you won’t soon forget.

Located on the shore of Loch Fine, the longest sea loch in Scotland, Inveraray Castle is often considered to be a country house or stately home. But its spectacular exterior, which has previously been captured on camera in Downton Abbey’s 2012 Christmas Special, is undoubtedly fit for a king. Steep conical turrets and a third floor were added to the structure in 1877 after a fire had spread through its interior, whilst a second fire in 1975 put the future of the castle in jeopardy. Following extensive restoration however, Inveraray now overlooks 16 acres of beautiful gardens that can be enjoyed by visitors all year round.

This four storey, tower keep on Loch Laich is notoriously difficult to visit. Surrounded by water and privately owned, there are only a limited number of tours that invite visitors through its doors each year. Yet, the castle, and its magnificently rugged backdrop provided by the Morvern Hills, is even more captivating when seen from afar. Visible even from the A828, between Oban and Glencoe, visitors might recognise Castle Stalker by another name – one which is perhaps more peculiar than its own – ‘The Castle of Aaaaaaaaaaaarghh’ from Monty Python and the Holy Grail.

At the head of Loch Awe stands a five storey tower house belonging to Kilchurn Castle. Built in the 1400s by the first Lord of Glenorchy, the fact that this tower still stands is remarkable in its own right. For visitors though, who may reach the site by boat from Lochawe Pier, the chance to walk Kilchurn’s battlements and relish in the immeasurable view it provides is a truly invigorating and exceptional experience.

Situated on its own tidal island, Eilean Donan Castle marks the point where Loch Duich, Loch Long and Loch Alsh unite. Accessible by a single stone bridge, this 13th Century castle was once a magnificent family home, with views across the water reflecting the mountains of Kintail in its ripples. Whilst, in 2001, the island’s recorded population stood at a grand total of one, the most recent census shows that even the island’s final resident has disappeared.

Nestled in the heart of Aberdeenshire, Craigievar Castle is a Princess’ dream. With its sculpted turrets and tickled pink exterior, it’s widely rumoured that Craigievar’s Scottish Baronial architecture was the inspiration behind Walt Disney’s famous castle motif. Visiting Craigievar on a dry day allows visitors to explore the castle’s sweeping gardens; perhaps even following one of its two waymarked walks.

If ever you need inspiration for building a castle, Caerlaverock Castle would be it. Complete with picture-perfect moat and a grand, turreted entrance, Caelaverock truly looks as though it has been torn from the pages of medieval history books. Standing on the southern coast of Scotland, the strength of this triangular stronghold is proven by the substantial ruin that remains there to this day. The surrounding area is internationally recognised for its waterfowl and wading birds, whilst smaller visitors will be delighted by Caerlaverock’s castle themed adventure park.

First built in the 13th Century, Dunvegan castle was remodelled as a mock medieval build some 600 years later. Situated just a mile to the north of Dunvegan on the Isle of Skye, the castle stands as the longest continuously inhabited castle in Scotland. Steeped in over 800 years of Clan history, the magnificent grounds of Dunvegan are as intriguing as they are beautiful; with a stunning maze of water features, walled gardens and glass houses offering a sanctuary to those that visit.

Duart Castle became the ancestral home of Clan MacLean after having been included in a dowry received by the 5th Clan Chief in 1350.  Brought back from ruin in 1911, Duart Castle on the Isle of Mull now offers its visitors action packed experiences swathed in the spirit of Duart. After walking amongst its shadowy dungeons, visitors will be relieved to emerge into the swirl of fresh Scottish air atop the castles battlements. Whilst below, events in the grounds include ghost tours, displays of swordsmanship and theatre company performances.

Ever since fire devastated Ardvreck Castle in mysterious circumstances in 1737, its gnarled remains have become a striking feature amongst its spectacular mountain surroundings. Historians believe that Ardvreck was once a formidable structure, with a stunning walled garden and magnificent courtyard. Now however, when waters rise from Loch Assynt, Ardvreck can often be cut off from the mainland – leaving little more than an enthralling, knotted mass of stone emerging from the ground.

Think our list should have been different? Let us know your bucket list favourites in the comments below. 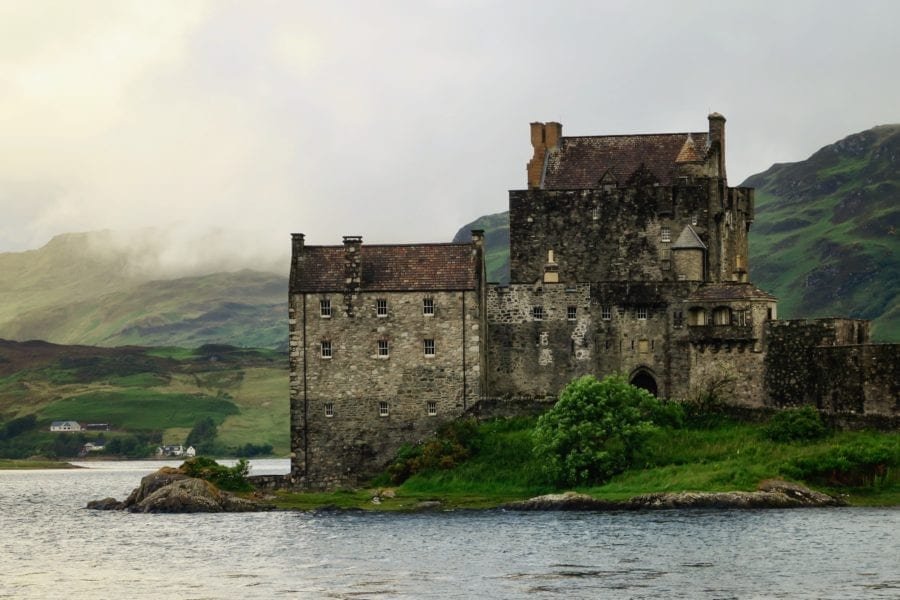