While Scotland as a nation is rightly proud to claim Robert Burns as their own, it’s the south-west county of Ayrshire which has the deepest and strongest connection with the National Bard, and which proved the inspiration for many of his masterpieces.

Ayrshire’s greatest son, Robert Burns was born in Alloway on 25 January 1759, three kilometres south of Ayr, in the house which is now known as Burns Cottage. He was the eldest of seven children born to William Burnes and Agnes Broun, who met and married in Marbole, South Ayrshire. At the age of seven, Burns and his family moved to Mount Oliphant Farm, where they lived and worked, carving out a tough and laborious upbringing for the young poet and his siblings.

But it was this challenging upbringing, alongside the spectacular Ayrshire countryside and people he met along the way, which inspired many of his great works – which themselves have provided audiences worldwide with such joy for centuries. 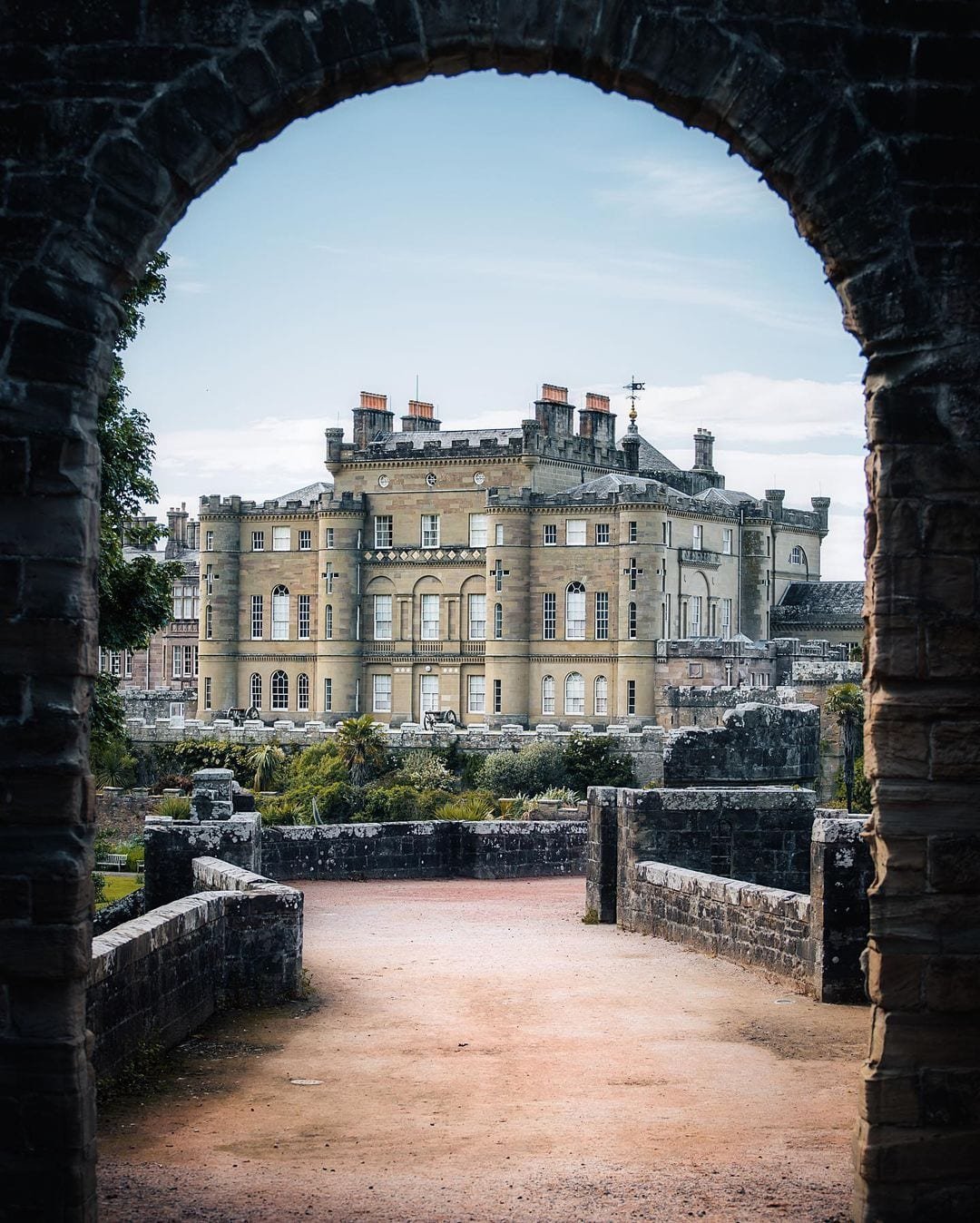 And Burns’ connections to Ayrshire weren’t to end there. In 1777, his father uprooted the family again, this time heading to a farm in Lochlea, near Tarbolton. Here they stayed until William Burnes’ death in 1784. And it was in Tarbolton that Robert, his brother Gilbert and several friends, set up the Tarbolton Bachelors’ Club, where they debated the big issues of the day. The public can still visit the property, which has been beautifully restored and converted into a museum documenting Burns’ early life, after facing demolition just before World War II.

Following the death of William Burnes, Robert and Gilbert attempted to keep the family farm at Lochlea afloat, but soon conceded defeat and moved permanently to Mossgiel Farm, on the outskirts of Mauchline, just a few months later. The pair had previously been renting the farm in secret prior to William’s passing. It was here Burns met future wife, Jean Armour – unsurprisingly, another source of inspiration for many of his poems and lyrics. The pair’s house in Mauchline can still be visited today, alongside the National Burns Memorial Homes, built and expanded in his honour between 1896 and 1937.

It was not, however, a straightforward love story between Robert and Jean. While they were courting, Burns was borne his first child by Elizabeth Paton – his mother’s servant – in 1785, before Jean gave birth to twins just a year later. Prior to their birth, the pair signed a marriage contract, against Jean’s father’s wishes, which he promptly tore up and sent Jean to live with family in Paisley.

But another fair maiden, Mary Campbell, had also caught the young poet’s eye and he penned several works dedicated to her, including The Highland Lassie O, Highland Mary and, following her death from typhus in 1786, To Mary in Heaven.

It was during Burns’ time in Mauchline that he wrote a number of his most famous and acclaimed poems, most notably To a Mouse, Holy Willie’s Prayer and The Jolly Beggars.

His first printed works were published in Kilmarnock, Ayrshire, in 1786 – Poems, Chiefly in the Scottish Dialect. Amidst reported plans to move to the West Indies and work on sugar plantations, Burns’ Kilmarnock Volume reached Edinburgh, where it was read by fellow poet Thomas Blacklock, who requested a second volume.

This was the cue for Burns to depart Ayrshire, but for the Scottish capital, rather than the West Indies. And it would be his final real connection with the county, which had inspired him so entirely en route to becoming the National Bard and pioneer of the Romantic movement. On return from Edinburgh, he reacquainted with Jean Armour and the pair made Dumfriesshire their home, until Burns’ death in 1776, aged just 37.

Located in Alloway, the museum boasts more than 5,000 Burns artefacts, including handwritten manuscripts. 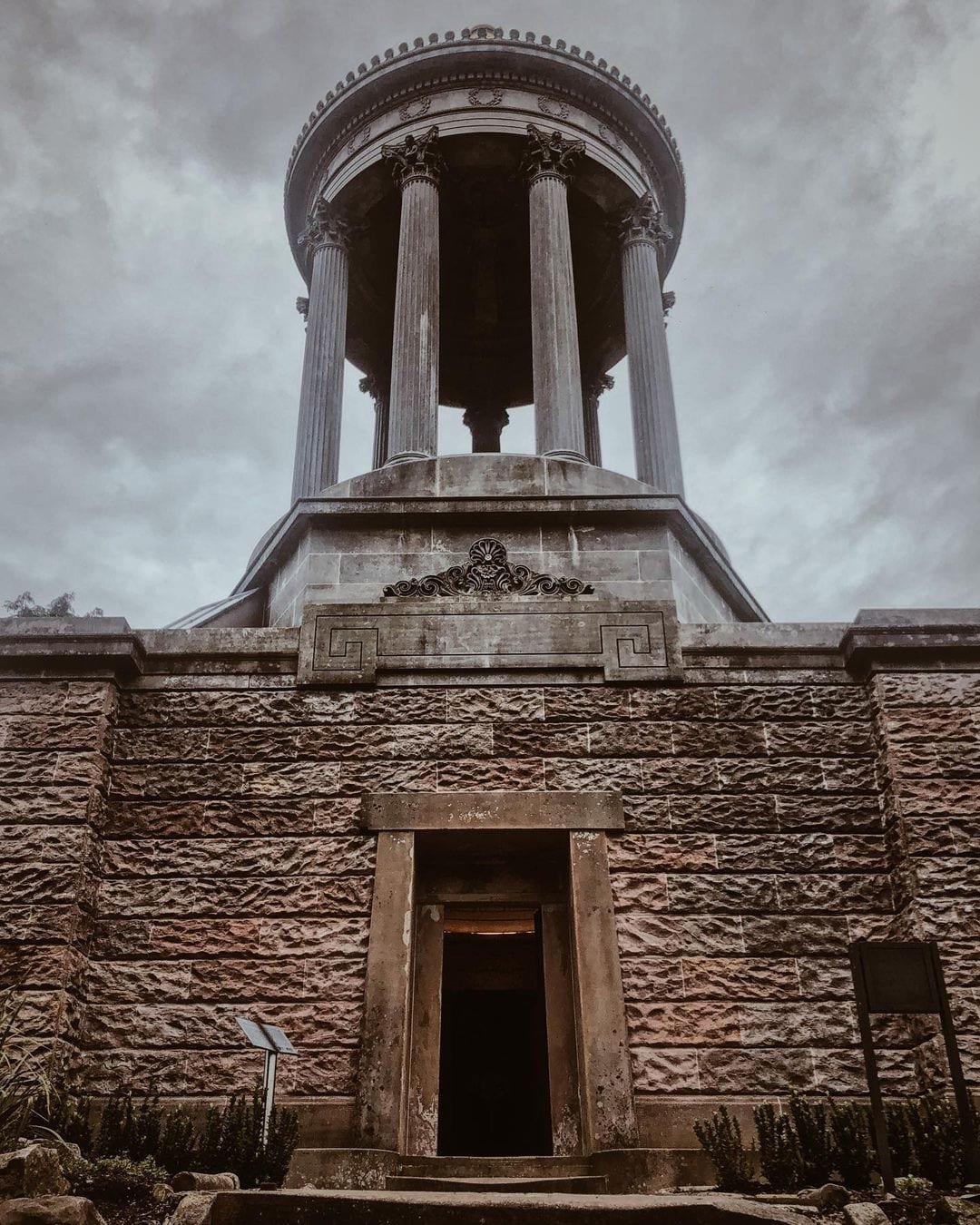 Now part of the Robert Burns Birthplace Museum, the cottage is where Robert was born and raised before moving to Mount Oliphant Farm at the age of seven. 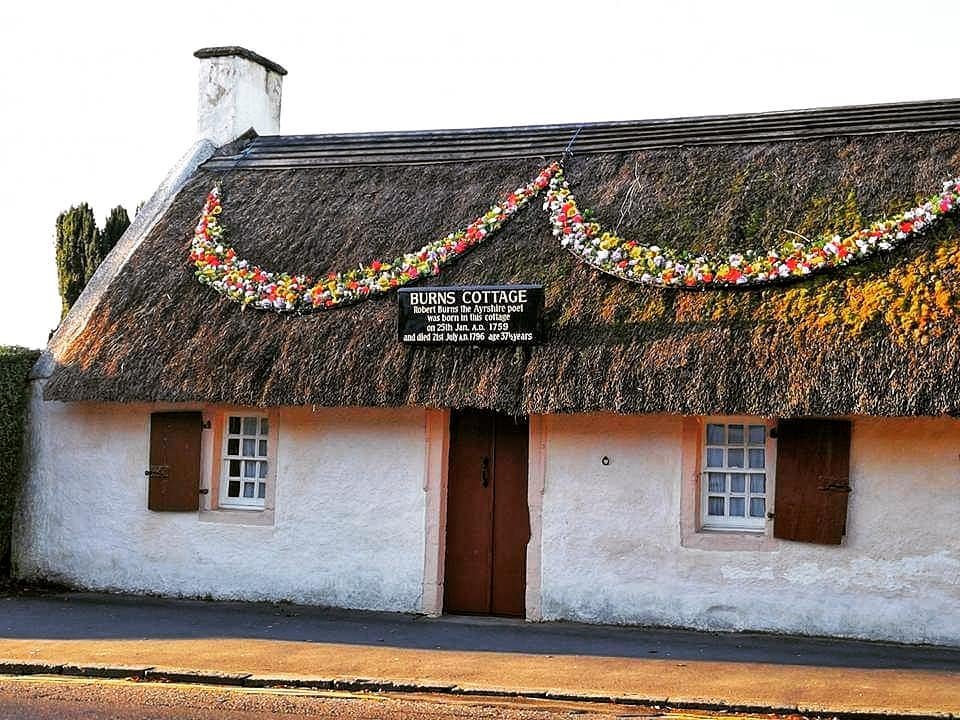 Located in Alloway, the Burns Monument is where Burns tourism began. Constructed in 1823, the site is part of the Robert Burns Birthplace Museum complex, and overlooks the Brig o’Doon.

The attractive path connects Burns Cottage with Robert Burns Birthplace Museum in Alloway. Along the path, visitors can admire various artworks dedicated to Burns, including a cast-iron mouse and granite haggis. 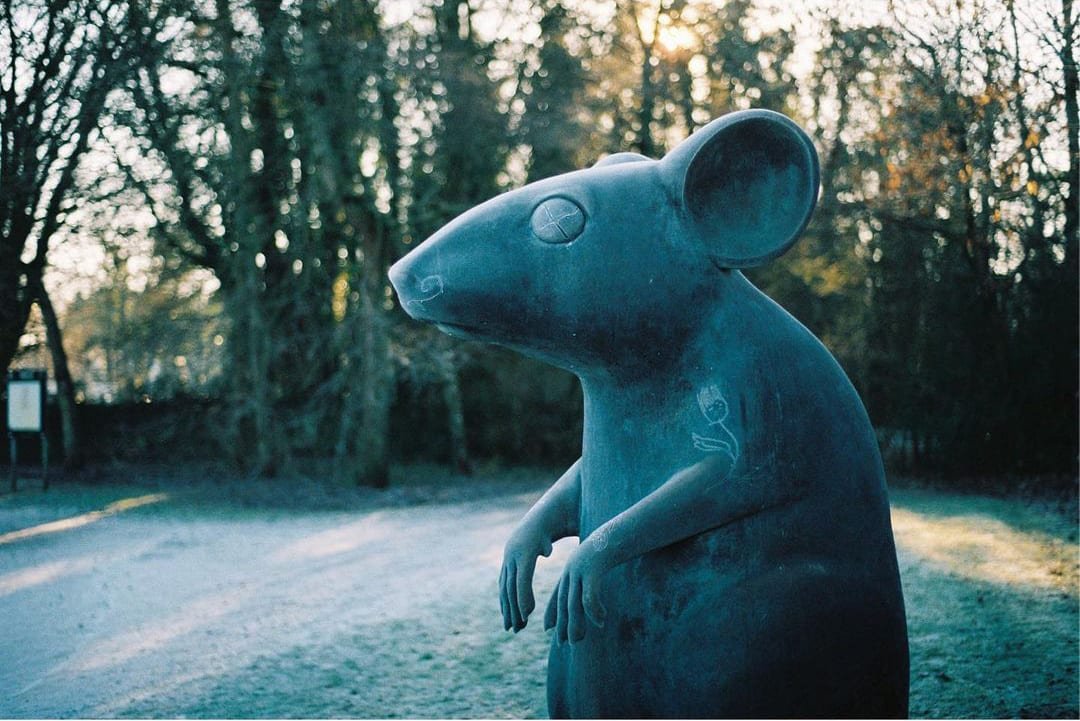 Famous for its portrayal in Burns’ most loved and famous poem, Tam o’Shanter, where witches danced to the devil’s bagpipes, the ruins are more or less exactly as Burns will have experienced them in the 18th century. It is also the location of William Burnes’ grave. Just along from Alloway Auld Kirk, the humpback bridge is where Tam o’Shanter escaped the witches in Burns’ heralded poem. 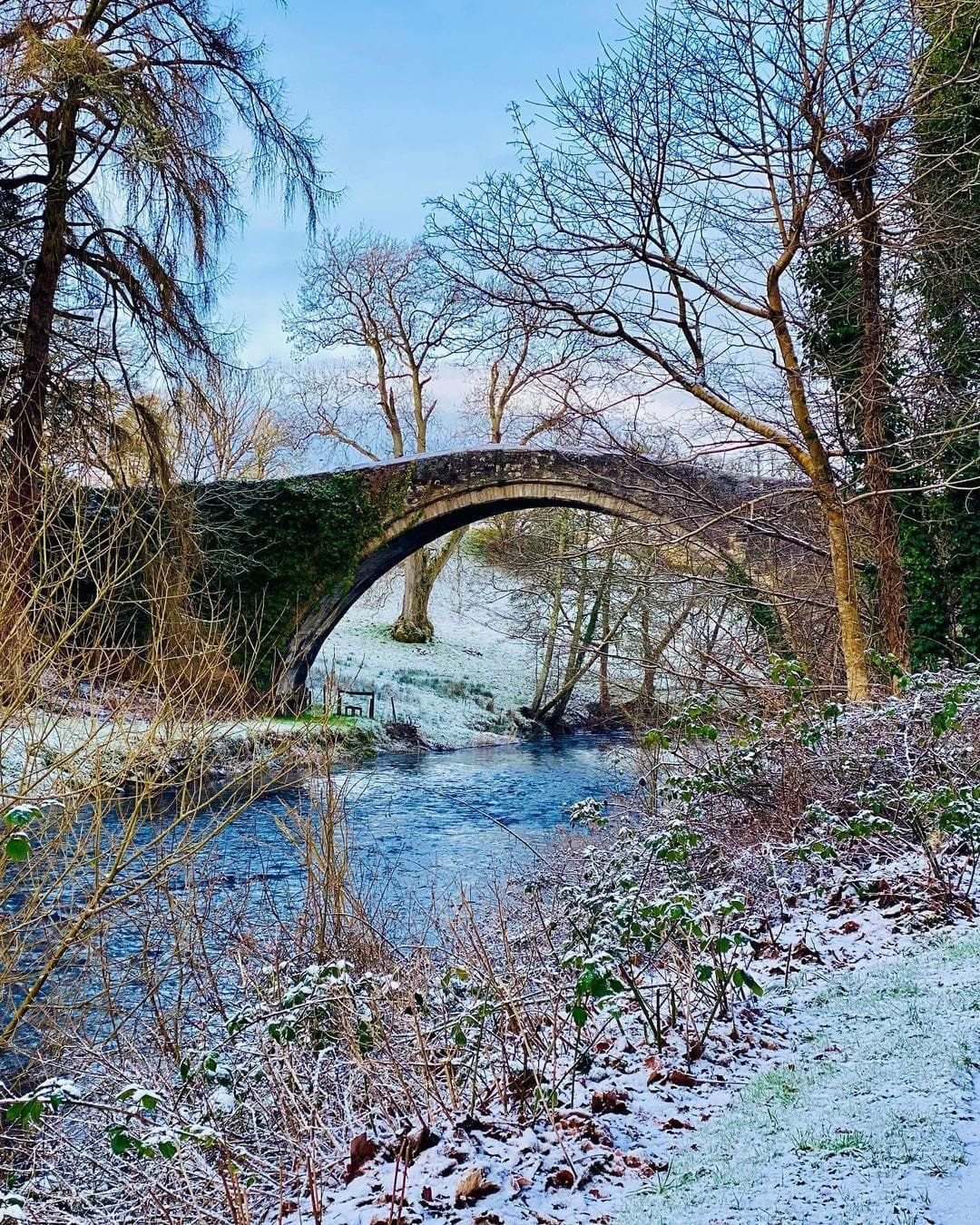 The location where Burns grew up from the age of seven to 18. The farm is said to have inspired many of the poet’s early works.

Here, you can visit the place where lodged in a room with Jean Armour in Mauchline. The museum’s collection is recognised of being of national significance and it regularly holds events including Burns Birthday in Mauchline.